Sculpted watermelons in the service deli case welcome customers to the new Gelson’s in Del Mar, Calif. — the chain’s first location in San Diego, “which is a market we’ve been looking to get into for years,” Yvonne Manganaro, senior director of marketing, told SN. The store, located less than 20 miles north of downtown San Diego, is the first former Haggen to reopen under a different banner and, ironically, the first store Haggen opened in Southern California a year ago.

The Gelson’s in Del Mar is the first to feature the company’s new logo, with the chain’s name written in script in white with a darker border — “a simpler, fresher look,” Manganaro pointed out, than the previous logo, developed in the mid-1990s, that featured the company name in block letters. The new logo will be featured on eight more stores the company plans to open this year (including two more in the San Diego market) and on existing stores as they are remodeled.

Gelson’s Del Mar covers 48,700 square feet and is the largest store in the 19-store chain, allowing space for larger displays, such as one for sumo tangerines, a fruit with a thicker rind — displayed for the grand opening with a statue of a sumo wrestler.

The store has space for a large display of Soaptopia products, displayed in a painted bathtub as part of the store’s wellness section.

The store has three features unique to each Gelson’s location, Manganaro said: checker-unload checkstands; a service desk on the customer side of the checkstands; and a salad bar. The store already had a salad bar that was half the size Gelson’s wanted so it converted that to an antipasti bar and added a self-service salad bar with soup wells. The service deli also features a carving station that slices turkey, prime rib and tri-tip for sandwiches or takeout orders.

Gelson’s signature cowboy steaks are cuts of 1 pound or more that were added within the past year and that help drive foot traffic to the department “when we advertise them,” Manganaro said. The chain features only natural beef — free from hormones or antibiotics — in the service and self-service meat cases, with all meats packaged on site.

With extra space in the store, Gelson’s was able to give cut vegetables its own display along the vegetable wall, separate from cut fruit, with which it shares display space in most locations. Gelson’s considers anything grown in California as local and uses signs throughout the store to designate what part of the state products were grown. 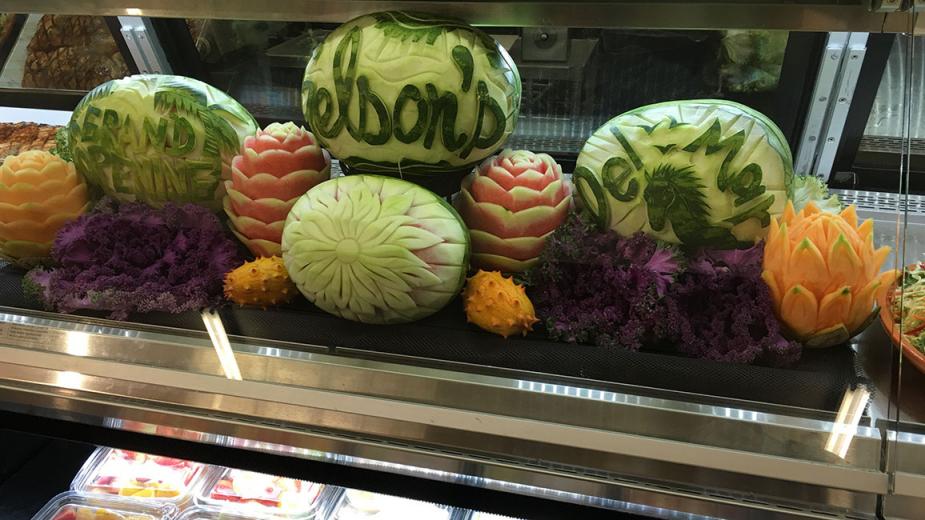