There’s little doubt that Fairway Market’s dreadful first quarter financial performance — and the market’s reaction to a turnaround CEO Jack Murphy likened to “climbing a mountain” — has put the iconic New York retailer in real peril. But Murphy is nothing but an optimistic mountain climber, and while delivering the bad news to the investment community this week, emphasized the following positive developments as well.

Fairway has added a new chief information officer, Maureen Minard, formerly of the fashion retailer Aeropostale. Minard, Murphy said, will help Fairway establish systems and controls to better guide it to profitability. Fairway has also been at work recruiting what Murphy called the next generation of store managers, plucking the roster of competitors, mentioning Costco in particular.

Fairway is famous for massive displays of hand-laid produce, but Murphy confessed the merchandising isn’t always right for business. He told analysts that stores were over-assorted, and resets could save on labor costs, reduce shrink and simplify the experience for shoppers. “We are going through a very precise sales per square foot productivity study, so that every single item and every single department earns their space,” he said, maintaining a goal of offering “the right products, at the right place, at the right time.” Produce resets at stores now underway are putting more items in reach of shoppers — literally — with the added benefit of allowing for labor savings and reduced shrink. And according to Murphy, the anecdotal evidence suggests customers are finding items easier than they used to.

Expansion by the scoopful
by ThinkStock

A fresh idea in seafood — a “scoop your own” frozen shrimp bar — is among the programs underway designed to expand categories. Murphy said the new offering has expanded shrimp sales without cannibalizing the rest of the shrimp category or the seafood department. Noting the importance of measuring the success of such programs, these ideas are helping Fairway shoot with more precision that it used to, Murphy said.

One figure from the second quarter that wasn’t bad? Gross margin as a percent of sales grew to 31.5% from 31% in the same period a year ago. This stems from Murphy’s “supermarket 101” changes implanted during his first nine months on the job, including deploying price optimization software to help the company better understand price elasticity, combined with decreases in shrink.

While more traditional advertising vehicles such as newspaper inserts and direct mail are helping in suburban stores, Fairway is “hitting the streets” in urban locations. Murphy said he’s participated in grass-roots, “guerrilla” campaigns to hand out discount offers to pedestrians around Fairway stores, an exercise he said helps to remind New Yorkers how much they love the brand. Murphy said he intended to add that element to the suburban store customer acquisition effort, going to soccer games and other places where people congregate, “going to where the customers are, not just running an ad and expecting them to show up.” 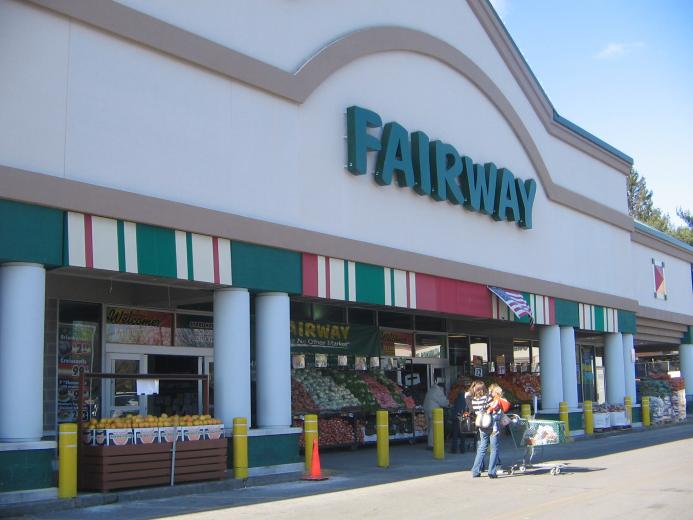