Bashas’ is continuing its aggressive store-remodeling program with the recent reopening of a store just three-and-a-half miles east of its corporate offices in Chandler, Ariz. It was the eighth of 20 remodels scheduled for this year, following 15 last year and plans for 20 more in 2016 — a burst of activity that has followed Bashas’ emergence from Chapter 11 bankruptcy in 2010.

One of the unique merchandising ideas debuting at Bashas’ remodeled Chandler store is special end-aisle display fixtures promoting items for the home — including candles, vases, coffee cups, bath salts and cutting boards. On one side of the wooden bookcase-like fixtures is the company’s stylized “B” logo in silver — a design incorporated on most of the store signage.

The produce section at the remodeled Chandler store highlights an expanded selection, including additional SKUs of mostly organic items.

Bashas’ has always set aside a section of its stores near the front where parents can leave their kids while they shop — with monitors throughout the stores that allow them to see what’s going on in the Cub House. Above the Cub House are pictures that promote Bashas’ as “the hometown grocer,” with historic photos that show the company’s roots going back to 1932.

The remodeled store strives for an upscale look, with dark, wood-like flooring around the perimeter and lighter-colored tiles in the middle of the store.

All Bashas’ stores sell hot soup in the service deli, but the self-service kiosk in the Chandler store, modeled on a design used at the company’s upscale AJ’s chain, is being tested in the latest remodel, to see if customers accept it. It offers six varieties of soups instead of the usual four, and frees up counter space for additional merchandise.

The deli area has a service case and a self-service case with packaged gourmet deli items like cheeses and salads, plus a soup bar and fresh sushi. The remodeled Bashas' store features arched department signs that incorporate a satin-nickel finish on the letters which, when the light hits just right, project the letters back onto the wall behind the sign to create a 3-D effect, and photos highlighting product from each department.

The Chandler store features expanded selections at the service meat and seafood counters and in the self-service sections. As with previous remodels, Bashas’ has traded in the stark white look of many of its older stores for more desert-oriented colors, including sage greens and tans. 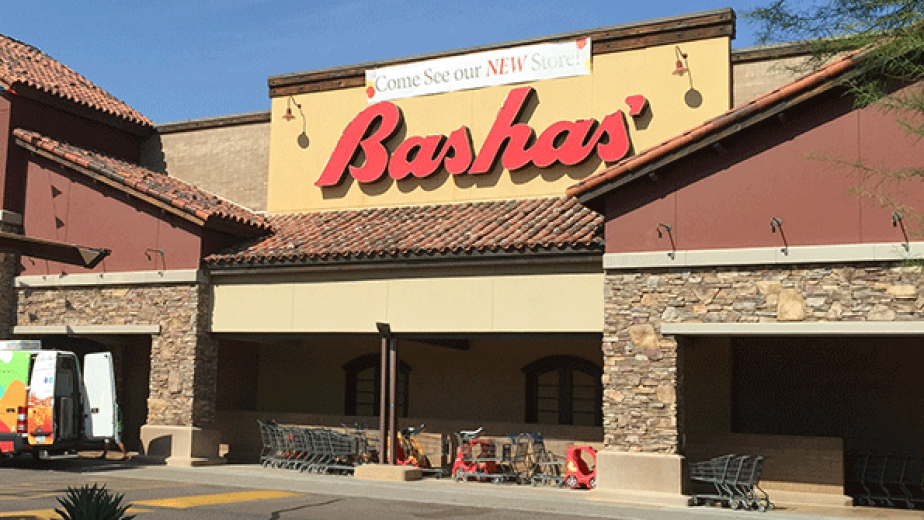