With more than double the space for this year’s Show & Sell Center at IDDBA’s Dairy-Deli-Bake, which took place June 5-7 in Houston, team members had a lot of room to play with creative concepts and stylish merchandising.

The pho bar — a take on the Vietnamese noodle soup that has recently surged in popularity in restaurants — was a chance to turn the hot bar or cold bar concept on its head, according to Jonathan Whalley, education coordinator, IDDBA. He said it received “rave reviews” from showgoers.

Charcuterie plates are a trendy offering that originated in Europe, said Thomas LaFera, deli team member and a buyer for Walmart Neighborhood Market.

The deli team also added a playful spin by dipping the charcuterie in chocolate.

Build your own dinner

One case in the deli section showed off mix and match options intended to help customers pick up tonight’s dinner, said LaFera. The carryout cups seen here are like the “build your own 6-pack” concept in beer — customers could pick out four containers from the case to customize their meal.

The deli team merchandised sub sandwiches in a wine rack, part of the lunch and snacking section of the case.

The meals team created a “cook & chill” concept using a combi-oven to cook food sous-vide; a blast chiller to cool it; and a vacuum packer to seal it up, said Chris Koch, corporate chef and business development manager, Angelo Po America. This preparation could be done in a central commissary.

Stores could either reheat the food to sell as fresh prepared meals, or sell the components to the customer. This display invites customers to choose one protein, one vegetable and one starch to throw in a skillet to make a meal at home.

According to Koch, the vacuum-sealed packages are safer than containers with lids, and the preparation technique leaves food fresher, more nutrient-rich and with a better texture.

These soup kits give customers easy meal prep, but they also help retailers reduce shrink: Ingredients could include leftover ham or beef, vegetable scraps, a starch, fresh herbs and a tablespoon of a commercial soup base.

Breakfast trays like this one could be warmed in store or chilled and packaged for customers to reheat in the microwave.

A world of choices

The deli service case also made the most of multicultural dishes like samosas. Offerings could be rotated daily or weekly. Koch noted that the concept appeals to Millennials, who are looking for new and healthy options, as well as aging Boomers, who are seeking premade, pre-portioned meals for one or two, and variety.

Every part of the dishes made at the taco stand was made using one piece of equipment, said Daniel Lessem (left), a chef at Rational.

Cheese pairings don’t have to be a formal program at your store. The Show & Sell cheese team created this cheese and bourbon “impromptu paper pairing” by writing the offerings on a piece of butcher paper spread out on a counter. Cheese team member Allen Hendricks, VP of foodservice and education at the Wisconsin Milk Marketing Board, said retailers could use whatever they happen to have in store that day.

One cheese case answered common customer questions, such as “Why is my blue cheese moldy?”

Cheese departments should take advantage of the rise in snacking. These individually wrapped cheeses can be mixed and matched at five pieces for $4.

Entertaining is also an important concept for cheese.

Dairy and bakery team up with fresh-baked bread paired with flavored butter.

Do it right, do it fresh

IDDBA’s research has found in-store bakery bread sales have leveled off. Many customers look for “clean” labels when they shop and don’t realize bakery bread has a short ingredient list: in most cases, water, flour, yeast and salt.

Show & Sell bakery team member Scott Fox, Dorothy Lane Market’s VP of bakery operations, said this year’s bread display was about authenticity and letting customers know items are baked fresh. No matter what type of bread you’re selling, “do it right, do it fresh,” he said.

A centerpiece of the bakery section was a station showing three ways to offer pizza. Retailers could do all three or just pick one or two, said Jennifer Dahm, director of coffee and bakery merchandising, Dorothy Lane Market. Each method is high margin and cost effective without a lot of labor.

The first way would be to merchandise pizza components — in perfectly portioned packages — for customers to make the dish themselves.

Method two involves a premade pizza that would be cooked fresh for the customer to eat in store or on the go.

For the third method, customers would grab a pizza to bake at home.

The cake team showed off current trends like bright colors, sculpted toppings and a “surprise inside,” like a cake with candy in the center.

Decadence is also in when it comes to cakes. “If you’re going to eat it, it might as well be amazing,” said Tina Steichen, cake decorator/supervisor, DecoPac. 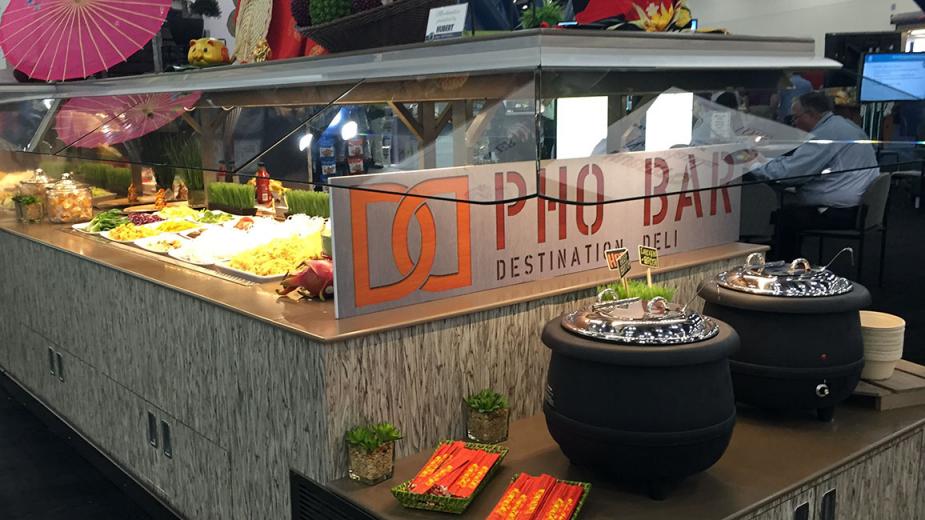