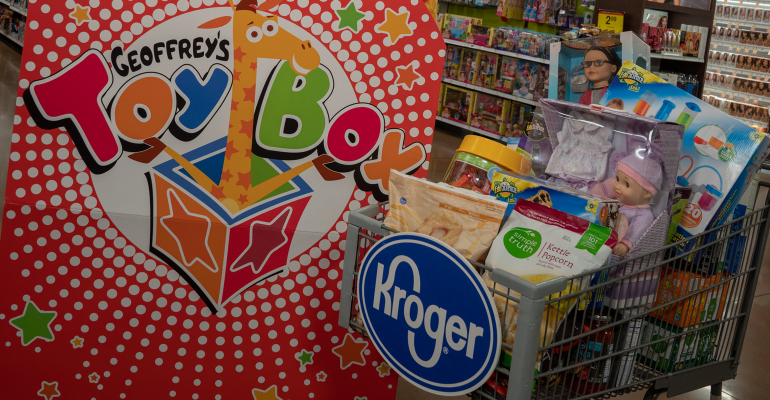 Kroger to revive Toys R Us for the holidays

The Kroger Co. will bring back the memory of Toys R Us this holiday season by carrying a collection of the defunct toy retailer’s brands in its supermarkets.

Kroger said Friday that it has partnered with Geoffrey LLC, a holder of Toys R Us intellectual property assets, to put Geoffrey’s Toy Box merchandise in nearly 600 stores under its grocery banners. Special displays featuring images of Toys R Us’ Geoffrey the Giraffe mascot will contain an assortment of 35 children’s toys ranging in price from $19.99 to $49.99.

"Geoffrey's Toy Box delivers a unique shopping destination within Kroger stores," Robert Clark, senior vice president of merchandising at Cincinnati-based Kroger, said in a statement. "We're excited to offer Geoffrey's Toy Box this holiday season to provide our customers with the opportunity to purchase a selection of toys once exclusive to Toys R Us." 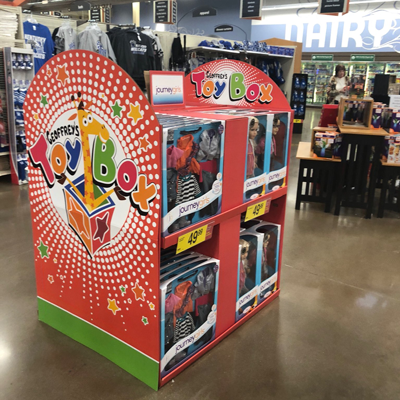 The Geoffrey's Toy Box units will roll out to stores starting this month, according to Kroger. The program will include exclusive toys from the brands Animal Zone, Imaginarium, Journey Girls, Edu Science, You & Me and Just Like Home, with the product selection varying by location.

"We are thrilled to partner with Kroger to bring a curated collection of product from our beloved portfolio of brands to American consumers this holiday," stated Richard Barry, executive vice president at Geoffrey's Toy Box.

A division of Geoffrey LLC, Geoffrey's Toy Box owns and operates a portfolio of more than 20 children’s toy brands, also including Fastlane, True Heroes and others.

Wayne, N.J.-based Toys R Us filed for Chapter 11 bankruptcy protection in September 2017. At the time, the company had 885 Toys R Us and Babies R Us stores in the U.S., Puerto Rico and Guam and more than 810 international stores. Despite arranging financing and closing a spate of U.S. stores, the 70-year-old retailer wasn’t able to emerge from Chapter 11 and this past March announced that it would liquidate its U.S. operations. Fairfax Financial acquired the 82-store Canadian operations of Toys R Us in early June. Later that month, Toys R Us shut down in the U.S.