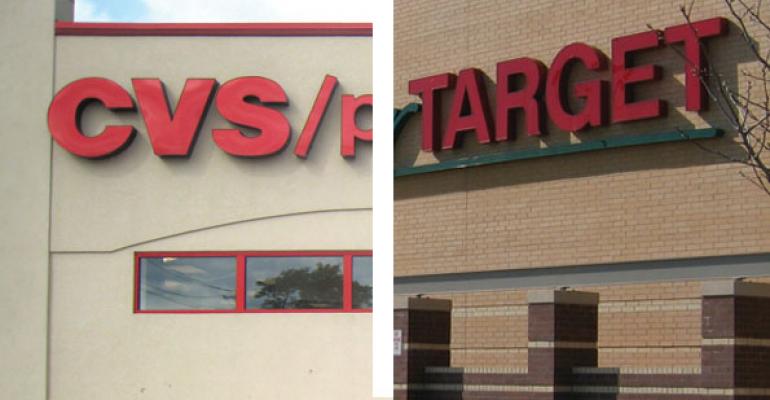 CVS Health, which would operate Target’s 1,660 in-store pharmacies under a CVS/pharmacy store-within-a-store format, would allow both retailers to capitalize on increased traffic, including visits from members covered under CVS Health’s pharmacy benefit management services.

“If you look at our ShopperScape data, 38% of Target shoppers shop at CVS and 43% of CVS shoppers shop at Target,” Brian Owens, Kantar Retail’s director of retail insights for the drug channel told SN. “There is a lot of cross-shop going on and given that that exists, we believe that there is an opportunity for both retailers to increase store traffic.”

Target in particular will benefit from increased visits resulting from members covered under CVS/caremark’s PBM services, said John Mulligan, Target’s EVP and CFO, during a call with investors.

“One of the very important benefits of this transaction as we think about driving growth and traffic, is the fact that members of caremark, the PBM network and their members, will have the ability to drop off and pick up prescriptions inside a Target store,” he said.

Enrollees of CVS/Caremark’s Maintenance Choice Plan are given the option of filling 90-day supplies of medications for chronic conditions either through CVS/caremark mail service or at any CVS/pharmacy location. Regardless of where members choose to fill their prescription, they pay the typically lower mail co-pay.

While CVS would operate the pharmacies and in-store clinics under a $1.9 billion acquisition deal, products and services operated outside of those spaces, such as over-the-counter products, would remain under Target’s purview. But it remains to be seen whether the retailers will partner when it comes to their loyalty programs, Owens said.

“There are still a lot of questions about whether CVS shoppers will eventually be able to redeem ExtraCare points at Target for OTC healthcare, and will vice versa be able to happen at CVS,” he said. “So if you think of the Rite Aid Plenti program [where shoppers use points at Rite Aid and its partner retailers] I see something like that potentially availing itself between a two way relationships between the retailers that makes it easier for the shopper to shop.”

Beauty products seek a way back in supermarkets
Aug 30, 2021