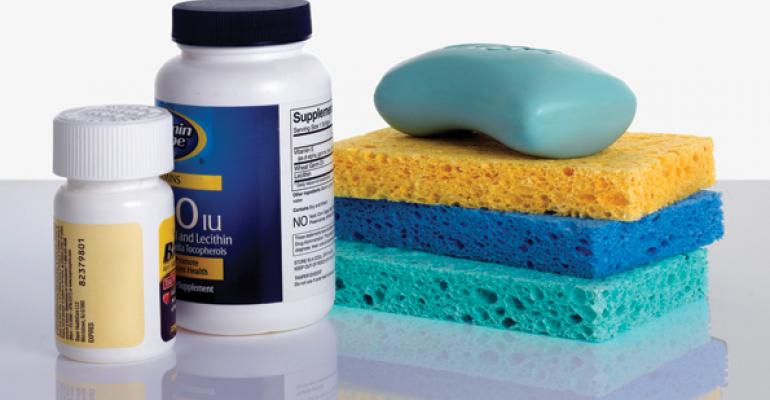 Healthy Growth in Some Nonfood Categories

The majority of nonfood categories posted dollar sales increases in supermarkets over the last year.

While several segments benefited from healthier living, one category even benefited from environmental changes. Global warming has led to higher pollen counts and increased prevalence of allergies. This led people to seek over-the-counter medicines for help. This could be part of the reason why the cold/allergy/sinus category increased 6.7% in supermarket dollar sales to $771 million.

Separately, the humanization of pets is propelling pet supply sales, which climbed 6% to $744 million in supermarkets.

Growing numbers of households embrace pets as members of their families. Nearly two-thirds of pet owners (63%) enjoy giving their pets gifts on special occasions; pamper their pet with special clothing/toys (51%); and take their pet with them as much as possible (48%), according to a Mintel report.

Supermarkets are benefiting from the trend, as 63% of pet supplies shoppers thinking it’s easier to buy pet supplies when shopping for main household groceries.

It wasn’t all good news for nonfoods, though. Take internal analgesics. Competition from private-label remedies, as well as alternative ways to treat pain, have limited growth. But this situation could change as the massive Baby Boomer population ages, and there is increased demand for help treating arthritis pain.

Diaper sales remain down, due in part to declining birth rates and online sales.

More than two-thirds of Americans take at least one nutritional supplement every day.

There are many reasons why. The rising incidence of obesity and diabetes is fueling interest in healthier dietary habits. Also, the aging U.S. Baby Boomer population is embracing supplement use in an effort to maintain vitality, fend off disease.

In addition, concerns with rising health care costs are motivating consumers to use supplements.

The category is showing growth in all outlets, especially supermarkets, in which dollar sales grew nearly 7% to $1.2 billion for the 52 weeks ending June 16. 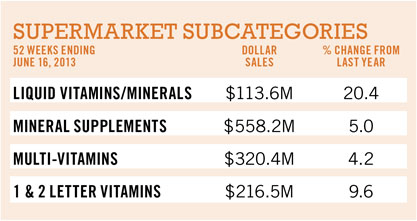 The 2012-2013 flu season started early, was intense and lasted longer than average, sending people scurrying for flu vaccines — and hand sanitizers. Hand sanitizers are the fastest-growing subsegment of soap, as sales climbed 12% to $30 million in food stores for the 52 weeks ending June 16.

Marketers are keeping demand strong with campaigns like Purell’s “Kill a Gajillion Germs,” in which schools that pledge to support healthy habits are entered for a chance to win free Purell and dispensers for their school.

While the Centers for Disease Control and Prevention said a vaccination is the best way to prevent the flu, it also recommends sanitizer use if soap and water are unavailable. 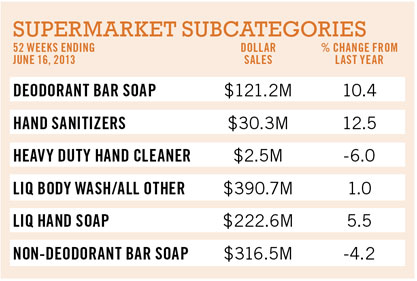 Caused in part by declining birth rates and online sales, supermarket sales dropped 4% to $918 million in food stores for the 52 weeks ending June 16.

But manufacturers continue to innovate to add excitement to the category. Kimberly-Clark, for instance, introduced Huggies Little Movers Slip-On Diaper Pants, a diaper that’s said to slide on and off easily.  IRI named the brand one of its 2012 New Product Pacesetters, those it deems the most powerful CPG product launches.

Procter & Gamble also extended usage occasions by adding bigger sizes to its Swaddler diapers. Once made for children size 3 and under, Pampers recently announced Swaddlers in sizes 4 and 5.

Research shows that two-thirds of moms have a picky eater, and nine out of 10 of these moms indicate they are unsuccessful at getting their picky eater to eat nutritious foods.

Marketers have also reached out to older ages with products like Abbott’s Ensure Muscle Health with Revigor, the amino acid metabolite HMB, and protein to help rebuild muscle and strength naturally lost over time.

More than 100 million Americans suffer from some form of chronic pain. Many of them rely on over-the-counter pain medications like acetaminophen and ibuprofen.

Part of last year’s poor performance could be lasting results from the wave of recalls a few years ago.  Likewise, warnings of gastrointestinal bleeding and other dangers of OTC pain medicines remain top of mind.

But now the category is getting increased merchandising support.  Internal analgesics were the No. 3 category (behind coffee and blades) with the largest increase in merchandising in 2012 vs 2011, according to the IRI report “Center Store: Driving Growth From the Inside Out.”

One in five adults in the U.S. has nasal allergies, or allergic rhinitis.

All that sneezing, congestion, and watery eyes take a toll, causing missed workdays, and reduced performance at school.

Those with mild allergic rhinitis – when symptoms that only strike for a few weeks a year – often look for over-the-counter medicine for help. These include antihistamines like Zyrtec, Benadryl, Claritin and Allegra that block histamine.

As a group, Millennials prefer big-box specialty retailers like Petco and PetSmart, possibly because as new pet owners, they need items like containment equipment, which older pet owners already own.

But mainstream retailers are using new tricks to train pet owners to come back to their stores. Supermarkets are increasing the size and scope of their pet care departments. They are sponsoring pet contests, running promotions with animal rescue groups and even filling pet prescriptions at stores with pharmacies.

They are also hosting pet-oriented websites and blogs, and using pet-related events to connect with shoppers.

This has helped the category grow 6% in supermarket dollar sales to $744 million for the 52 weeks ending June 16.

Meanwhile, the humanization of pets continues as a strong trend, with manufacturers and retailers introducing everything from human-style food to temporary tattoos for pets. 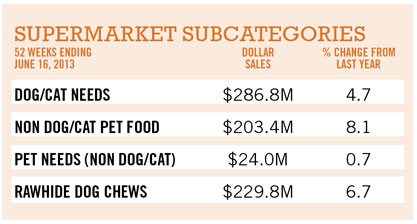 Retailers may want to brush up their toothpaste sales, which posted a flat $720 million in supermarket dollar sales for the 52 weeks ending June 16.

The good news is that marketers are giving consumers plenty of new product options, from gels and pastes to value-added products.

“Product suites,” groupings of products under the same brand, are a growing trend.

Marketers are also targeting specific groups. Colgate-Palmolive partnered with the Hispanic Dental Association to name July as Oral Health Month to help educate Hispanic American families about the importance of proper oral care. According to the HDA, nearly 40% of Hispanic adults live with untreated oral disease — nearly double the rate of non-Hispanic whites — and twice as many Hispanic children are likely to have untreated cavities, in comparison to non-Hispanic whites.

Wheat, corn and pine are the pick of the litter. Kitty litter, that is.

Indeed, natural living has extended all the way down to the type of kitty litter consumers purchase for their feline friends.  Marketers are catering to that mindset by introducing environmentally friendly, biodegradable and natural cat litter.

While clay litter remains the bulk of the market, more natural formulations are on store shelves. Among them: ExquisiCat Naturals Fragrance Free Wheat Cat Litter; Purina Yesterday’s News brand, made from recycled paper; Blue Naturally Fresh, marketed as 100% natural because it’s made with walnut shells, which are said to provide superior odor control and absorption; Arm & Hammer Essentials Natural Clumping Litter, formulated with a blend of natural corn fibers; and LittermaidPremium Natural Clumping Cat Litter, made from whole kernel corn and is 99% dust-free.

Other litters are made from natural sources like grain hulls, coconut shells/husks, peanut shells — even green tea leaves.

The category is performing well in all channels, growing 4.6% in multi-outlet dollar sales to $1.6 billion.

For the same period, dollar sales grew almost 3% in supermarkets to $646 to $26 million.

There are a lot of tummy aches out there.

Antacid tablets are the only gastrointestinal tablet segment to post a dollar sales drop, slipping 3% in supermarkets to $417 million. 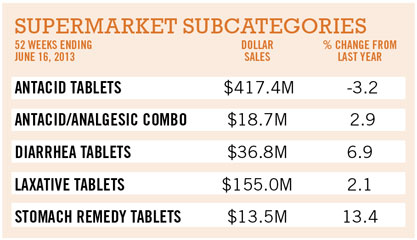 As confidence in the economy slowly rises, so does consumers’ tendency to shop for shampoo at supermarkets, where prices are often higher than at drug stores and big box chains. According to IRI, shampoo sales at food stores lathered up 0.7% to $628.7 million during the 52 weeks ending June 16, 2013.

The hair care category is highly saturated and competitive, creating challenges for manufacturers and retailers to encourage increased consumer spending in the category.

However, based on a recent Mintel report, continued improvements in product functionality combined with the emergence of new segments such as anti-aging have the potential to drive growth.

IRI data reveal that sales of dandruff shampoo and combo packs are sloughing off and dropping 0.6% to $120.6 million and 3.4% to $2.2 million, respectively.

Some attribute the decline to the estimated 6,000 Baby Boomer women who enter menopause daily in the U.S. and no longer need such products.

Others accredit reusable feminine hygiene items like the Diva Cup and multiuse pads, which totaled $1.6 million in sales in the last year — a 13.3% jump over the previous year —according to SPINS data.

Meanwhile, fear of Toxic Shock Syndrome and other health conditions linked to tampon use may be steering some toward sanitary napkins.

Supermarkets are capturing an increasing amount of battery share. According to data from Chicago-based IRI, supermarkets showed a supercharged spike of 4.1% to $570.1 million during the 52 weeks ending June 16, 2013. In comparison, sales of batteries declined in drug stores 0.5% to $581.1 million and were likewise flat with modest growth of 0.3% to $2.8 billion in supermarkets, drug stores, mass merchants, military commissaries and select club and dollar retail chains, combined.

The most popular batteries were alkaline. Alternative energy storage technologies, like supercapacitors, are showing promise as well, steadily draining the profitability power of lithium batteries.

The surge in supercapacitors is directly linked to the shrinking size of portable consumer devices like mobile phones and cameras. As handheld electronics become smaller, lighter, thinner, flexible and even wearable, so have the size and flexibility of the power supply component of electronic circuits – often supercapacitors. 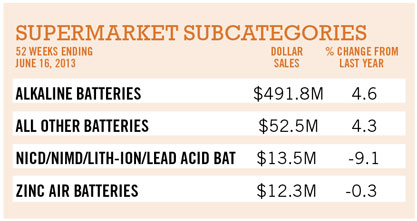 Whether it’s because of the increased number of people with allergies or the latest flu superbugs — like the winter of 2012-2013 strain that caused sufferers to endure an average 16 days of severe coughing — sales of cough syrup are up across channels, according to IRI.

One reason for the lift is the rise in seasonal hay fever and allergic asthma in the U.S. This can be attributed to an increase in carbon dioxide emissions that has gradually increased the pollen season upwards of 16 days since 1995.

Savvy retailers are marketing cough syrup offerings to a wider audience, not just those with a basic postnasal drip.

Supermarkets are gaining share of sleep remedies, which IRI classifies as products designed not only to get you to sleep but also to keep you awake (caffeine tablets).

This increase occurred despite the recall of a leading brand-name tablet line in 2012, an event that still has many retailers struggling to fill their once-full shelves with other items, including their own private-label equivalents.

Sleeping aid liquids experienced the greatest growth during the past year, with a hike of 382.8% to $21.4 million.

According to a recent Mintel report, the category has been propelled by natural and homeopathic products containing ingredients like flower and melatonin.