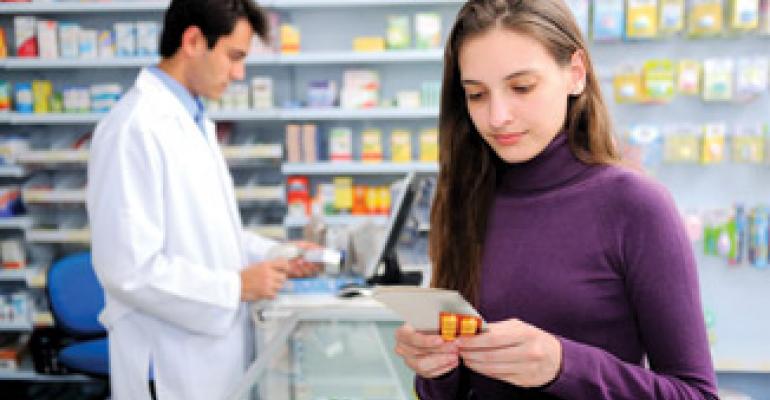 Supermarket retailers who sell Topco private-label over-the-counter medications now have another option in marketing their brand, called OTC by prescription. This avenue, which requires a doctor's prescription to obtain medications that are also sold over the counter, is bringing in new customers through third-party insurers and saving customers money with co-pays that are likely to be lower than

Supermarket retailers who sell Topco private-label over-the-counter medications now have another option in marketing their brand, called “OTC by prescription.”

This avenue, which requires a doctor's prescription to obtain medications that are also sold over the counter, is bringing in new customers through third-party insurers and saving customers money with co-pays that are likely to be lower than name-brand drugs or the retail shelf price of the private-label medicines.

Most people suffering from heartburn will get a prescription for Nexium or a similar drug, requiring a co-pay ranging from $20 to more than $50. But under a new Topco Associates program, pharmacists and doctors can now recommend Topco's private-label Omeprazole requiring a co-pay of about $5 or less.

Under the deal, most of Topco's Top Care over-the-counter medications are now a covered drug benefit by an undisclosed number of commercial/employer and private insurers, including Medicare and Medicaid.

The growth of drugs such as Omeprazole, Loratadine and Cetirizine, which have gone Rx-to-OTC, spurred Topco to pursue this program, which has been two years in the making.

The payoff for Topco and its retailers is greater exposure and loyalty for Topco store brands.

Here's how it works.

Instead of getting a prescription for a non-sedating allergy medication such as Cetirizine, Fexofenadine or Loratadine, a patient can now get a script for the Top Care OTC version instead.

“If a consumer has a prescription for a drug with a high co-pay, and that same prescription drug has an OTC equivalent, the pharmacist can recommend a Top Care brand OTC product at a significantly lower co-pay,” said Curtis Maki, a registered pharmacist and vice president of HBC/GM program management and pharmacy for Topco, Skokie, Ill.

Pharmacists need to confirm the switch with the patient's doctor.

Savings will vary depending on the type of health insurance. For instance, a Medicaid recipient most likely will have a low, or zero dollars, co-pay, while someone with an employer-sponsored health insurance may have a 20% co-pay.

At a time when many prescription-only medications are getting OTC status, the OTC-by-prescription market has strong potential, said Maki.

“Numerous health plans are looking to curb patients' need for a prescription-only drug by offering the OTC equivalent as part of their health plan,” Maki said.

Comprising more than 1,300 items, Top Care is sold at retailers including Brookshire Grocery Co., Piggly Wiggly South Carolina, Giant Eagle, Wegmans Food Markets and Winn-Dixie Stores. Depending on the insurance program, some Top Care products will be covered, while others will not.

Top Care OTC medications are comparable to the national brand because they are manufactured to the same strict specifications set by the Food and Drug Administration, and they also contain the same active ingredients and at the same dose as the national brands, said Maki.

To launch the program, Topco has spent the last two years securing approvals from the Centers for Medicare and Medicaid Services, the FDA and other agencies.

The deal applies only to Topco products. Due to certain rules and regulations, other retailers' private-label OTC products are not allowed to participate with Medicaid, according to Maki.

The time is right for private-label OTC products to play a bigger role in health care, said Maki.

“Insurance companies and employer groups are looking for innovative ways to save money, and if they're already spending money on national-brand OTC medications, why not look to private-label OTCs for incremental savings over the higher-priced national-brand product?” he said.

The agreement is significant because, aside from generic labels like Mylan and Rugby, private-label OTC medications have had little to no experience in the reimbursement/managed care marketplace, according to Maki.

The OTC-by-prescription market will exceed $580 million in manufacturer sales this year, according to Topco estimates. More than 90% of that is dispensed through a generic label like Mylan or Rugby and about 8%, a national-brand OTC. While more people are self-medicating in order to bypass the costs of a doctor visit as well as the cost of high co-pays, the volume of doctor office visits has not declined, said Maki. People are still visiting the doctor for routine physical exams and illnesses. Likewise, with changes in flexible spending account utilization of OTCs, patients are going to their doctors and asking for prescriptions for OTCs.

Many times, if a pharmacist consults with the patient's doctor, the doctor will agree to write any medically necessary prescriptions, especially with the rules governing FSA accounts, said Maki.

“The great thing is that if a doctor does prescribe the OTC, the pharmacist can first check whether the product is available through the patient's health insurance plan, or use the patient's FSA account to help the patient save the most money possible,” he said.

Retailers will benefit by increasing exposure of and loyalty to the Top Care brand, said Maki.

“I don't see nearly as many people demanding brand names as in the past,” said Wink.

Piggly Wiggly has carried the Top Care line for the last eight years.

“Everything we carry in HBC has a Top Care equivalent,” Wink noted.

“There's a small percentage of people who are brand loyal; the vast majority have confidence in the store brand,” he said.

Cousineau said he attended a Topco meeting recently when the plan was discussed. He was unsure exactly how much consumers would save, saying it depends on each insurance plan. Some plans will cover the entire cost of a generic, but not a national brand, he said.

Indeed, the OTC-by-prescription market is on the rise, he said.

“Due to changes in health care coverage, more physicians are writing more prescriptions for OTC meds,” he said.

Topco is distributing a launch kit to retailers that provides information on the program and various promotional materials to display in the pharmacy.

In the future, it will market the effort through employer groups and other health insurance plans.

SKOKIE, Ill. — Prior to the new Topco program, pharmacists did not dispense Top Care brand OTCs because they relied on other labels that were covered by both public and private health insurers, said Curtis Maki, a registered pharmacist and vice president of HBC/GM program management and pharmacy for Topco, Skokie, Ill.

Before, if a pharmacist wanted to dispense a Top Care brand OTC, the pharmacy would have to carry two different labels of the same product: the Top Care brand label for patients with private health insurance, and a generic label OTC that participated in Medicaid.

“This is inefficient, and a reason why Top Care nor other retailer private labels were not positioned behind-the-counter,” said Maki.

Now that Top Care is reimbursed by Medicaid and other insurers, pharmacists can feature the Top Care brand of OTCs not only on the retail shelf, but also behind the pharmacy counter for patients with a prescription.