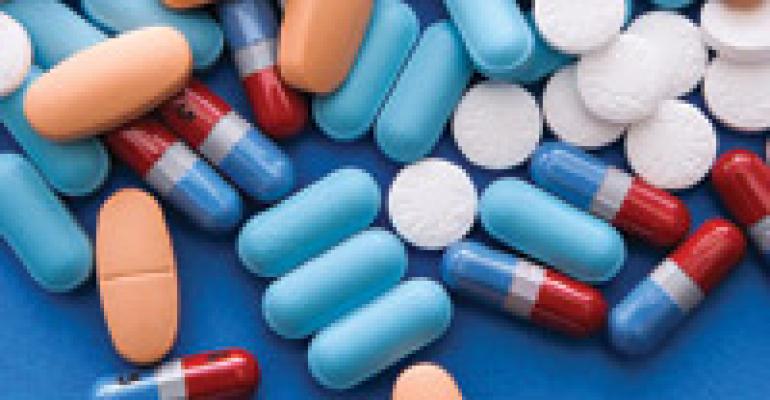 Supermarkets appeared to lose dollar sales to the drug channel, which performed quite well in comparison to all channel volume for the 15 large-volume nonfood categories tracked for the 52 weeks ending June 12, 2011. Of the $24.4 billion in sales generated across food, drug and combined food, drug and mass merchandiser channels, not including Wal-Mart Stores, supermarkets generated about 35% of dollar

Supermarkets appeared to lose dollar sales to the drug channel, which performed quite well in comparison to all channel volume for the 15 large-volume nonfood categories tracked for the 52 weeks ending June 12, 2011.

Of the $24.4 billion in sales generated across food, drug and combined food, drug and mass merchandiser channels, not including Wal-Mart Stores, supermarkets generated about 35% of dollar sales and drug stores tallied about 48% of sales of the key categories tracked.

Food registered category declines in analgesics (-5%), sanitary napkins/tampons (-1%) and batteries (-4.6%). Cold/allergy/sinus and shampoo sales remained flat. The only double-digit increase witnessed in the food channel among the 15 categories was weight control/nutrition liquid, powder. This category was also up in double digits in drug and food, drug and mass channels, spurred by an awareness of the nation's obesity epidemic.

In the drug channel, dollar sales increased in all nonfood categories tracked except for batteries, which continued a pattern of several years of declining sales.

Category performance was up across the board despite naysayer reports and studies challenging the effectiveness of some popular nutritional supplements, including calcium and vitamin D, which have enjoyed robust sales propelled in part by media authorities like Dr. Oz.

The Institutes of Medicine increased its recommendation for vitamin D from 400 to 600 units, but suggested that most people do get enough of both. Evidence of use supports bone health but not other healthy conditions, the IOM found.

Johnson & Johnson's McNeil Consumer Healthcare product recall fallout, which cost the company about $900 million in sales in 2010, continued into this year with recalls on Tylenol and other products. The full return of J&J's over-the-counter analgesic brands and other products to retail shelves isn't expected until this fall.

With brand integrity on the line, category demand has shifted to private label. SymphonyIRI reported a 27.9% dollar growth rate for analgesic private label in 2010 in its report, “2010 Year of Change.” As the economy continues to squeeze consumer spending, it's not surprising consumers will buy private-label aspirin that can cost 60% less than the name brand.

A rebound in the category is expected with an increased aging population that suffers from aches and pains.

Supermarket sales in the category were flat while drug stores sales picked up the pace.

Last year, a federal law was passed to strengthen the Combat Methamphetamine Epidemic Act of 2006, which put the sales of cold medicines containing pseudoephedrine and ephedrine behind the pharmacy counter and limits quantity purchases. The new regulation requires all retailers of products containing pseudoephedrine, ephedrine and phenylpropanolamine to verify that they train their staff and comply with legal requirements of the 2006 act.

Several states are considering following Oregon and Mississippi in making PSE available by prescription only.

Children's safety remains a concern even after the Food and Drug Administration issued a warning three years ago that pediatric over-the-counter cough and cold medications should not be used for infants and children under 2 years old. This year, the FDA set dosage standards for liquid cough/cold medicines.

On the supply side, Johnson & Johnson's McNeil Consumer Healthcare business suffered from more recalls of Tylenol. The company doesn't expect to start rebuilding its market share until next year.

Manufacturers' innovative approaches to oral care have helped float toothpaste sales across mass retail channels despite cost increases that suppliers were able to balance out with promotional incentives. Product performance that meet specified needs seemed to have trumped price sensitivity for shoppers as manufacturers devised new improved and clinical formulations that covered all aspects of mouth health. New products from the two biggest toothpaste suppliers — Procter & Gamble and Colgate-Palmolive — grew their franchises with ever more ways to clean and keep teeth strong, healthy and white.

The government, the food industry and the media have all driven awareness levels up about the obesity epidemic plaguing the nation. But there has yet to be a dramatic impact on the escalating weight gain rates so far. The Centers for Disease Control & Prevention points out that no state had a prevalence of obesity less than 20%.

This means there are no quick fixes and the effort is long term. Consumers are likely to continue to try new weight control products and diets as a supplement to healthy eating and weight management techniques.

The antacid segment is the top performer in the category. Growth has come from fairly recent new entries, including Novartis' Prevacid 24HR, introduced in 2009, and Zegerid OTC from Merck, which went over the counter last year. Both Proton Pump Inhibitors compete with Procter & Gamble's Prilosec OTC , the first PPI that entered the market in 2003. These entries have heated up the heartburn-stomach ailment category and have been heavily supported with marketing dollars.

Future category growth should benefit from aging adults 55 and older who now comprise over a third of the U.S. population.

The drug store channel is outpacing food stores in the category with both dollars and units up. Supermarket unit sales were down.

Kimberly-Clark Corp. made the most noise last year by launching U by Kotex, which includes new black packaging and brightly colored designs.

Kotex's new line of tampons, pads and liners has taken feminine care from institutional to personal. The brand's marketing tag-line, “Break the Cycle,” is about being open and honest when it comes to menstruation and feminine health.

Shampoo dollar sales in supermarkets, while essentially flat over the most recent 52-week period at $606.8 million, have shown progress over the past three years, recording diminishing sales declines of 5.1%, 3.9% and 1.2% in 2008, 2009 and 2010, respectively. The overall sluggish performance has undoubtedly been a function of the economy, which has led to some trading down in this highly tiered category, increased promotional activity and limited the success of new product launches and premium product extensions. In addition, food retailers appear to be losing ground to drug stores, which grew category sales by 3.9% to $449.2 million over the past year, following a gain of 4% in 2010.

The relatively tiny shampoo/conditioner segment ($1.8 million in sales in the most recent annual period) has exhibited wild dollar volume swings in supermarkets, declining 12.3% in the past year after increasing 6.3% in 2010. Meanwhile, natural and organic shampoos continue to evolve; for example, last October Safeway unveiled a private-label, natural hair and body care line called In-Kind.

Dollar sales growth of deodorant has paralleled the course of the economy in recent years. After a small downtick in 2009, supermarket sales of this everyday essential grew 3.1% to $559.4 million during the most recent 52-week period ending June 12, following a 1.6% gain in 2010. Drug stores, which heavily merchandise this category, fared even better in the past year, with sales rising 6.7% after increasing 4.2% in 2010. Mass merchants like Wal-Mart Stores also aggressively pursue sales in this mature category.

Battery dollar sales, which are roughly split three ways among food, drug and mass outlets, have been going downhill since 2008 across all three retail sectors. Supermarkets saw a 4.6% drop in the most recent 52-week period ending June 12, which followed declines of 6.0% and 2.5% in 2010 and 2009, respectively. Drug store dollar sales have performed even worse, slipping 6.1% in the latest annual period after similar declines in 2010 and 2009. Fierce pricing competition by brands and retailers during the recession, along with emphasis on private label, has contributed to this sales scenario. The growth of rechargeable batteries may also be taking a toll.

The sales dips have taken place across virtually all subcategories, including higher-priced high-performance varieties. Consumers may still be confused by the proliferation of new battery designs, providing an opportunity for retailers to help educate them through point-of-purchase material and employee training. Manufacturers can help here.

Improving sales in all channels are helping to replenish skincare's healthful glow, as consumers return to a category marred by a few blemishes during the recession, when discretionary spending was weak. Activity during the past 12 months was especially pronounced in supermarkets, where sales jumped nearly 2%. Other retail venues saw sales improve nearly 3%.

A review of the subcategories reveals that facial products — cleansers and moisturizers — enjoyed the biggest bump in sales, up more than 4%. Here, manufacturers have succeeded in promoting products that transcend the discretionary label to become standard purchases. Technology has helped. For example, Procter & Gamble recently created a “virtual beauty experience” with its My Beauty Adviser app, covering some of the company's biggest brands, including Olay.

Mouthwash and dental rinses have enjoyed a nice bump in sales since the depths of the recession, when many consumers passed the category by. The drop in sales in all channels through 2008, 2009 and even last year reflect many a consumer's opinion that in tough times, mouthwash does not have to be a part of their basic dental care routine.

With an improving economy, however, sales and volume of dental rinses have improved in all channels. Increasingly specialized formulas for whitening, tartar control and gum care have been successful in attracting some buyers, as well as formulas with low or no alcohol. Private label has also allowed retailers to gain sales with those shoppers still reluctant to spend on such treatments. Growing penetration into the category by toothpaste brands has allowed manufacturers to bundle and promote a “total care” value under a single brand. This, in turn, has helped consumers justify the additional spend.

After a couple years of steady growth, eye care sales at supermarkets have flattened out. This could partly be due to consumers drifting to the drug store channel, which saw another year of healthy sales and unit growth. The bigger culprit, though, seems to be the expansion of non-traditional competitors like drugstore.com, which has projected $750 million in revenue by 2013. Chain eye care outlets like Pearle Vision have also stepped up their game, offering online ordering and a wide range of deals that bundle optometry appointments with glasses, contacts and accessories.

On the manufacturing side, Switzerland-based Novartis now controls more than 70% of the eye care market after its acquisition of Alcon late last year, further diversifying its portfolio to include a range of over-the-counter solutions as well as prescription drugs.

Acquisitions like this as well as innovations should increase given an aging population.

Hair coloring has traditionally been viewed as a chore, and for several years sales at supermarkets reflected this fact.

Things are starting to look up, however, as manufacturers have begun offering formulas that make the job easier and less damaging. Among other innovations, many companies now offer a foam formula that provides no-drip coloring, as well as products that promise to restore and strengthen hair. Mainstream brands also offer natural formulas that market ingredients like avocado and citrus fruit.

Retailers have developed innovations of their own, meanwhile. Many have invested money in their HBC departments, turning them into destination shopping experiences in some cases. There's also been growth in private-label offerings. Last year, Wal-Mart Stores began offering a foam product engineered in Japan that beat national brands to market by several months.

It was another strong year for the sun care category, with supermarket sales up in both dollars and units. The drug store channel leads in overall sales and growth, but food retailers are making a solid showing as they put more marketing muscle behind their personal care selection.

Skin cancer awareness continues to drive sales, with manufacturers, doctors and a variety of organizations promoting the regular use of sunscreen. It's also an innovation-heavy category, with manufacturers featuring all sorts of value-added claims involving anti-aging, water resistance and, of course, sun protection. Manufacturers are also one-upping each other on SPF protection, with numbers now reaching into the triple digits.

Earlier this year, the Food and Drug Administration established industry guidelines that will rein in some of these claims.