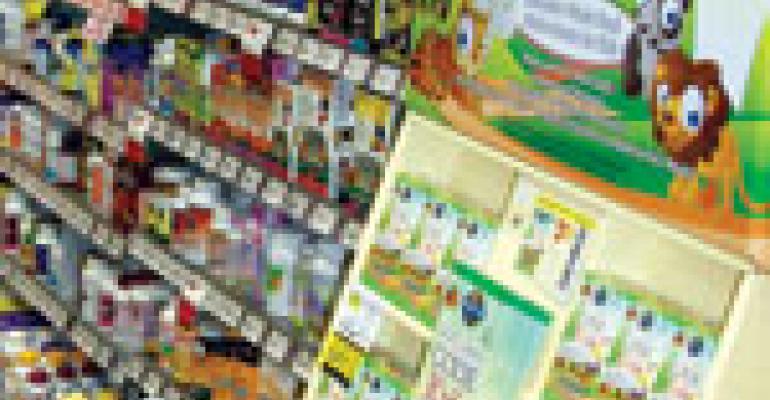 Taking a dietary supplement is no longer as simple — or mundane — as swallowing a pill. From dose-measured sticks and gummies, to liquid shots and topical lotions, a number of new delivery systems on the market is making the category more accessible to consumers of all types.

“Supplements are a universal attractor,” said Abraham Nabors, supplements manager at Mustard Seed Market & Café, Solon, Ohio. “There's a nice cross-section of our customer base that takes supplements in one form or another.”

Data from the Nielsen Co. shows that food/drug/mass sales of vitamins, minerals and supplements grew 12.4% for the 52 weeks ending Aug. 7, with sales topping $3.3 billion. Vitamins and minerals continue to dominate, with a 58% share of the category, followed by non-herbal supplements (34%) and herbals (8%).

It's a huge category, and still the vast majority of supplement SKUs are sold in pill or tablet form. By and large, Americans don't seem to mind. A survey of consumers by the Natural Marketing Institute found that 44% of respondents preferred ingesting capsules, and 41% tablets. Only 28% stated their first choice would be something like softgels.

However, the current partiality for tabs and capsules is likely to expand to cover alternative delivery forms — in large part driven by need, experts warned.

“A lot of small children and our seniors have problems swallowing a large pill, so we have liquids and gummies available as an option,” noted Monica Amburn, corporate dietitian for Bi-Lo Supermarkets, Mauldin, S.C.

Nabors agreed, saying Mustard Seed shoppers at either end of the age spectrum have emerged as the best, early adapters of other supplement forms.

“We have your traditional capsules and tablets, but where we've seen a big increase is in liquid supplements. A lot of people say they don't like swallowing pills,” he told SN. “You can still get a very high-quality ingredients, but in liquid form. There's also better absorption since it bypasses digestion and goes right into the bloodstream.”

It's no surprise that Baby Boomers and seniors are reluctant to ingest yet another pill. The National Center for Health Statistics recently found that, among older Americans (age 60 years and over), more than 76% used two or more prescription drugs and 37% used five or more.

“A lot of older people want to consolidate the number of pills they're taking,” said Nabors. “So they look for alternatives.”

“More people are interested in trying things they haven't before, such as liquids,” she said. “I have a small set from one company that recently came out with a whole line of gummies, specifically for adults. Some adults, particularly seniors, are opting for them.”

Norman said that liquid supplements have become more popular in recent months, including iron. She estimates that 99% of the store's customers buying it are pregnant women, or those who are anemic. Similarly, liquid calcium is attracting more users.

“I've gotten anecdotal stories from customers who said their bone-density scans are coming back better after taking this product for some time,” she noted. “I think that's very impressive, when you actually get that kind of feedback.”

Customer comments can be an important resource in managing any department, but in supplements, they are invaluable. It's also important for managers to be well-informed, since these new supplement types are typically accompanied by a lot of questions.

“Many different vitamin forms are on the market. Chewables, gelcaps, liquids, tablets and gummie versions are all readily available,” said Roberta Anding, a Houston-based registered dietitian specializing in supplements. “But how much of this is marketing and how much is science? There are several factors to consider when choosing the form.”

Mustard Seed regularly hosts informational sessions in the two-store retailer's restaurants. Each location has banquet space where the events are held.

“If a staff person attends one of those we have them type up all the facts and points from the lecture and that gets distributed to all the other employees who are not able to attend,” said Nabors.

The retailer's supplement sections do not employ a dedicated staff person to oversee the department, but there are “designated supplement employees” who are available to answer questions and interact with shoppers.

Cost is often a factor with consumers debating whether to try a different supplement form, as these varieties can be more expensive. Bi-Lo's market area was hard hit by the recession, and consumers looking for alternative forms of supplements not only have to consider their needs, but their budgets as well.

Amburn, who joined the retailer as a corporate dietitian earlier this year, says prices have emerged as one of the principal reasons shoppers right now seem to be shying away from alternatives to traditional supplement forms.

“A lot of the questions and discussions I am having with shoppers are around those basic platforms of supplementation” like tablets and capsules, she said. “They're the most familiar ones and the most affordable in this economy, where there's not a lot of extra money to experiment with other forms.”

At Wildberries, even more affluent California consumers have felt the pinch, according to Norman. Yet, when it comes to personal wellness, Norman has noticed consumers are more amenable to upselling — provided it's done in a transparent, honest manner.

“People do spend for the whole ‘you get what you pay for’ thing,” she added.

For those who remain unconvinced, private label has surfaced as a viable alternative. Many suppliers of store-brand supplements have a growing variety of non-tablet forms in their portfolio of products.

“We do real well with private label,” said Norman of Wildberries. “It's a great way to get your name into more homes, and we always keep the prices lower on our private label.”

The store uses two different private-label suppliers: One primarily does multis and vitamin/herbal combinations; the other does herbal extracts.

At Mustard Seed, where the supplement footprint takes up about 15% of retail floor space, Nabors said his store-brand selection extends beyond the usual tablets and pills.

“It's pretty extensive. It's comparable to some of the larger lines we carry,” he said. “They're all pharmaceutical-grade supplements.”

Amburn at Bi-Lo said her customers are well-acquainted with the chain's brand — primarily the Full Circle line sourced from Topco Associates, Skokie, Ill. — and have come to trust it, even if it doesn't offer a whole lot of different delivery forms.

“There are definitely lots of questions about our private label and the less-expensive supplements out there on the market,” she said. “Our shoppers want to know if they're just as good and as high in quality as the better-known national brands, that might be more expensive.”