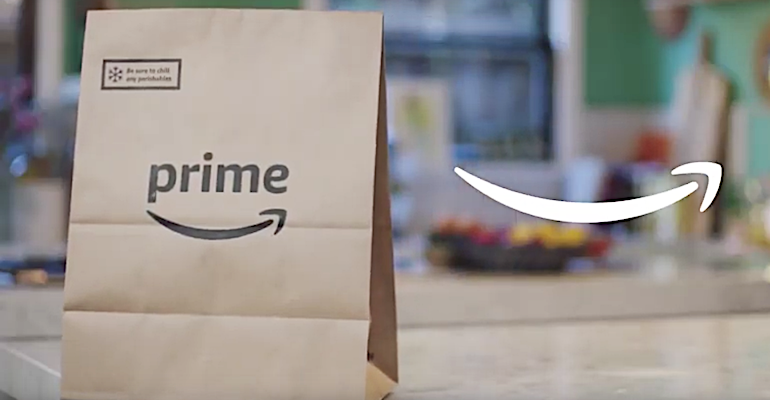 Amazon
Amazon’s food and beverage e-commerce sales are projected to climb to $26.7 billion worldwide in 2026 from $14.5 billion in 2021, a 13% compound annual growth rate, according to Edge Retail Insight predictions.
News>Online Retail

Amazon’s online edible grocery sales are projected to climb to $26.7 billion worldwide in 2026 from $14.5 billion in 2021, a compound annual growth rate (CAGR) of 13%, according to the latest Food and Beverage Sector Report from Edge Retail Insight, Edge by Ascential’s retail research arm. Walmart also will see strong growth, but not enough to overtake Amazon. Edge Retail Insight forecasts a 14.1% CAGR for Walmart’s edible grocery e-commerce sales over the next five years, from $10.1 billion globally in 2021 to $19.5 billion in 2026.

Still, both Amazon and Walmart will remain well behind Chinese e-commerce giant Alibaba, whose online food and beverage sales are expected to rise at a 10.7% CAGR from $20.6 billion in 2021 to $34.2 billion in 2026, solidifying the company as the world’s largest pure-play e-grocer. The Edge Retail Insight Food and Beverage Sector Report is based on forecasts powered by Edge’s proprietary data analytics technology.

“The COVID-19 pandemic has led to a massive uplift in demand for online grocery shopping missions. Amazon has been developing its online grocery business, and the Amazon Fresh service has been expanding in international markets as well. So that’s one of the key operators that we’re expecting to grow very strongly over the next few years,” David Gray, senior retail analyst at Edge by Ascential, said in an interview with Supermarket News.

Grocery and food sales via Amazon.com totaled $2.2 billion in the 2020 fourth quarter, up 20% year over year, including an October 2020 peak spurred by the rescheduled Amazon Prime Day, Edge Retail Insight’s report said. The researcher noted that third-party sales, via the Amazon Marketplace, represented 53% of the category’s total sales during the quarter. Beverages, pantry staples and snack food were the largest food and grocery segments in the period.

“It’s interesting with Amazon because they have a growing fresh business where they’re partnering with different retailers around the world — Morrisons in the U.K., Dia in Spain,” Gray said. “The expansion of the fresh business internationally, I think, is going to be quite a big driver of growth. But also on [Amazon.com], you obviously can order lots of groceries, ambient-type products with a longer life.” 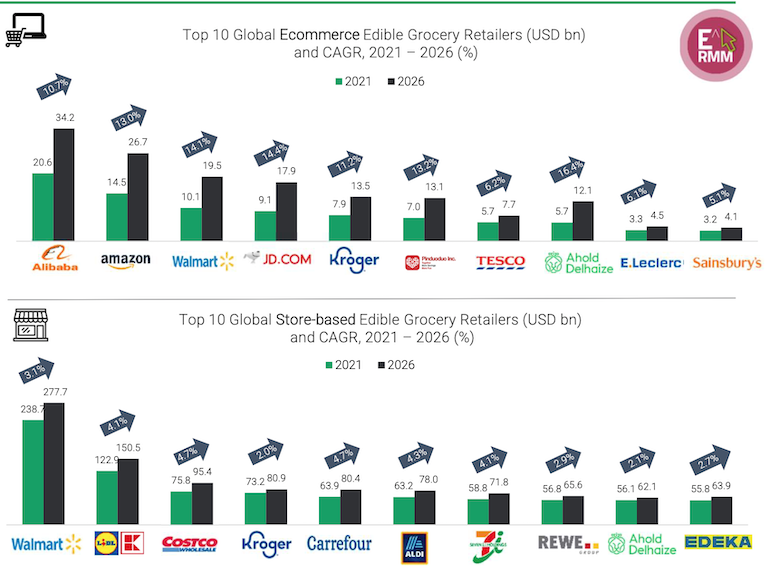 Walmart is driving grocery e-commerce growth via rapid expansion of its fulfillment capabilities, especially in pickup service, according to Gray.

“Walmart, as a business, is massively investing in e-commerce and technology. If you go to their investor relations site, they’ve got a pie [chart] on where they’re putting their investments. And if you look back four or five years ago, most of that investment was going into stores, but there’s been a complete shift to e-commerce and technology, something like a third of their cap-ex investment. So they’re placing their bets on e-commerce,” Gray explained. That also includes partnerships with international online retail players, such as Flipkart in India and Rakuten in Japan, he added.

“Over the years, we’ve seen Amazon moving more into Walmart’s space in terms of physical retail, with acquisition of Whole Foods, and Walmart moving more into Amazon’s space in terms of pure-play [online] retail,” Gray pointed out. “Moving beyond grocery, Walmart and its [third-party seller] marketplace is another interesting area because they’re really competing there with Amazon in all of the nonfood assortment. But in terms of the grocery store, what Walmart has been doing is pushing faster delivery. Amazon was always a leader in terms of speed, so Walmart has been making investments to try to speed that up. In European markets, a lot of the retailers have been pushing to speed up their home delivery to compete better with Amazon.”

“We’re forecasting strong growth for Kroger. They’ve got the partnership coming online with Ocado, and that’s going to really deliver more scale and more efficiency,” Gray said. “Ahold Delhaize has a partnership with Instacart but also is pushing rapid pickup. They’ve rolled out same-day pickup to something like 90% coverage across their U.S. market. So we’re forecasting strong growth both of those players, Kroger and Ahold Delhaize.”

By far, Walmart continues to lead in physical-store grocery market share globally. Edge Retail Insight pegs Walmart’s brick-and-mortar edible grocery sales in to grow at a 3.1% CAGR from $238.7 billion in 2021 to $277.7 billion in 2026. 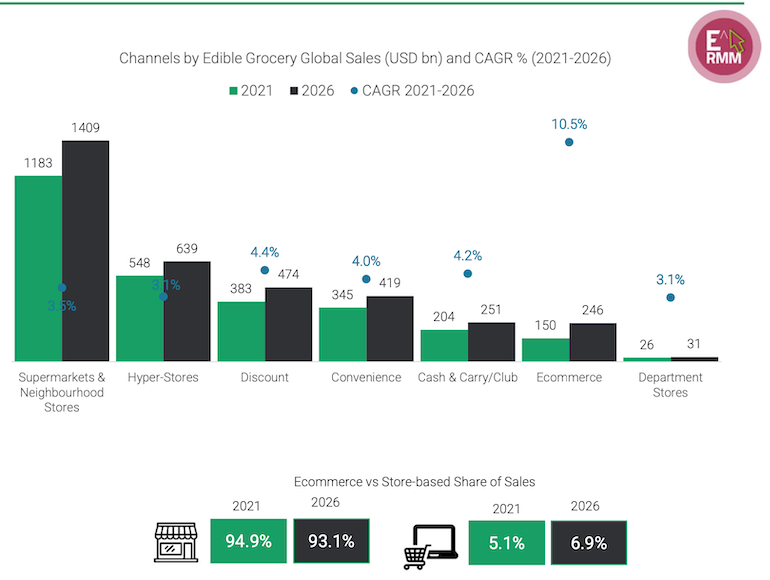 Among U.S. supermarket operators, Kroger’s brick-and-mortar edible grocery sales are projected to increase from $73.2 billion in 2021 to $80.9 billion in 2026, while Ahold Delhaize will grow from $56.1 billion to $62.1 billion (globally) over the same period, according to the report. Warehouse club chain Costco’s store-based, global food and beverage sales are forecast to rise from $75.8 billion to $95.4 billion in the next five years.

Hard discount grocers are expected to see some of the strongest brick-and-mortar sales growth, with food and beverage sales climbing from $63.2 to $78 billion worldwide at Aldi and from $122.9 billion to $150.5 billion at Lidl/Kaufland.

“Store-based retail is just not growing as strongly as e-commerce. E-commerce has historically grown much more quickly, but even more so in the wake of COVID-19,” Gray said. “Compound annual growth rates for the store-based retail side are between 2% and 5%, which is what we’d expect, depending on the type of store real estate. We’re generally forecasting slower growth for larger store formats than for smaller store formats.”

The researcher cited Ahold Delhaize as one example of a brick-and-mortar grocery retailer that harnessed e-commerce to power growth. By 2026, e-commerce will account for 22% of the Netherlands-based company’s total sales, up from 14% in 2021, driven by a $6.4 billion gain in online edible grocery sales, a CAGR of 16.4%. In contrast, Edge Retail Insight forecasts Ahold’s store-based channel to grow by a CAGR of 2.1% from 2021 and 2026.

“As e-commerce becomes a more permanent fixture in our grocery shopping behavior, the traditional players need to focus on adapting to consumer needs and priorities in order to compete with the convenience of marketplaces that have refined quick fulfilment strategies and competitive assortments,” Edge by Ascential CEO Deren Baker said in a statement. 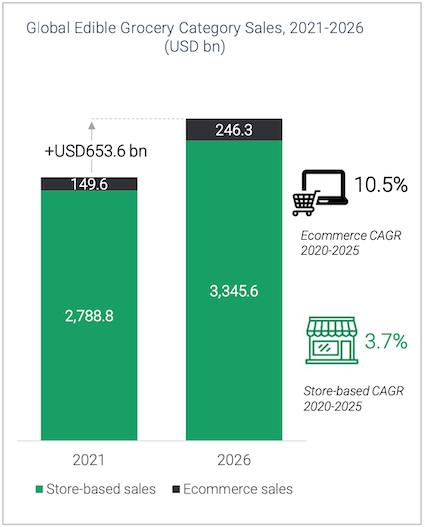 Traditional supermarket leaders have been ramping up their online offerings by partnering with third-party delivery intermediaries like Instacart, expanding click-and-collect services, launching or enhancing loyalty programs, and bolstering their front- and back-end capabilities to accommodate omnichannel consumers, according to Edge Retail Insight.

“With online edible grocery CAGR sales growth notably higher than those for store-based sales, consumer goods manufacturers should be planning investment strategies that take advantage of the new operating environment,” Baker observed. “This includes recognizing marketplace capability to offer personalization at scale, as well as the increasing importance of engaging with delivery intermediaries directly and not just leaving that relationship to the retailers.”

The online channel will lead in global grocery sales growth going forward, according to Gray. “The first one is going to be e-commerce. We’re forecasting a 10.5% compound annual growth rate over the next five years, [with] the shift to e-commerce as a result of the pandemic. Then I’d say discount, as consumers continue to focus on value. Discount and convenience have always been growth channels. Obviously. you’ve got Aldi and Lidl developing a presence in the U.S.,” he said.

“In some markets around the world, the larger store formats have been struggling to grow their sales,” Gray added. “So in terms of growth channels, e-commerce, discount and then, potentially, smaller formats. The large formats are not going to grow as well.

“While the food and beverage sector is predicted to see growth, this will be at a much slower rate than the intense demand of 2020. This is as a natural result of easing COVID-19 restrictions and the reopening of the hospitality industries,” according to Baker. “Despite this, the food and beverage category is highly lucrative and the shift towards e-commerce during the pandemic — and specifically online grocery shopping, which many people started doing for the first time in 2020 — has seen online marketplaces such as Amazon and Alibaba take the opportunity to push into the sector, capitalizing on their sophisticated last-mile infrastructure and databank to win the loyalty of the stuck-at-home supermarket shopper.”