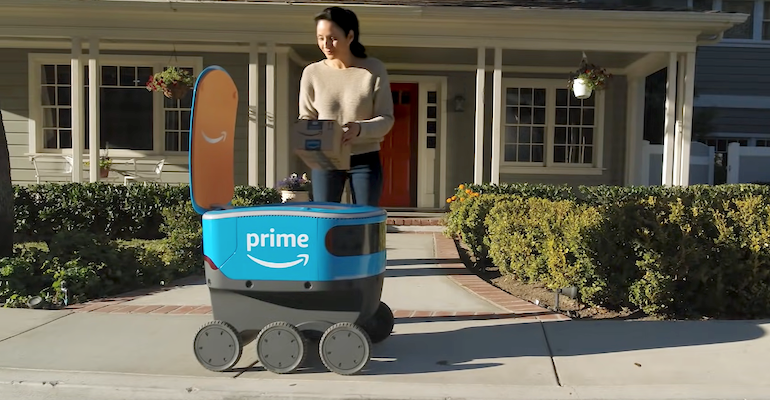 Field tests of Amazon Scout ended as program gets scaled back

The Seattle-based e-tail giant launched a field test of the electric-powered Amazon Scout in early 2019. In the pilot, six of the self-guided, six-wheeled vehicles — about the size of a small cooler and emblazoned with the Prime logo — made small-package deliveries in a neighborhood in Washington’s Snohomish County. Since then, the test was expanded to Irvine, Calif.; Franklin, Tenn.; and Atlanta.

However, Amazon spokeswoman Alisa Carroll on Friday confirmed published reports that the company was halting the Amazon Scout pilot because of uneven results. With the move, Amazon will maintain a team for Scout and continue to explore the concept but will scale back the program, she said in an email.

“During our limited field test for Scout, we worked to create a unique delivery experience but learned through feedback that there were aspects of the program that weren’t meeting customers’ needs,” Carroll explained. “As a result, we’re ending our field tests and reorienting the program. We are working with employees during this transition, matching them to open roles that best fit their experience and skills.”

Amazon developed Scout at its research-and-development lab in Seattle, ensuring that the vehicles can navigate around pedestrians, pets and other objects in their path. In the initial test in Washington, Scout delivered packages Monday through Friday during daylight hours. The vehicles — accompanied by an employee — roll along their delivery route at a walking pace.

The delivery process worked as follows: Customers order items from Amazon as normal — at Amazon.com or via the Amazon App — and their package(s) are delivered by one of Amazon’s carrier partners or by Amazon Scout. When Scout arrives at their home, customers walk over to the vehicle, the top flips open and they retrieve their order. Scout then goes on its way. Customers were able to select from the same delivery options, including free same-day, one-day and two-day shipping for Prime members.

According to Bloomberg, which first reported the end of the Amazon Scout test, Amazon has begun to retire experimental projects as sales have tailed off. Approximately 400 people were working on the Scout project globally, and now the team will be downsized to a “skeleton crew” to re-examine the concept of an autonomous delivery vehicle, Bloomberg’s report said.

Other large retailers also have explored the use of self-driving vehicles for last-mile or middle-mile delivery service, including Walmart, Sam’s Club, The Kroger Co., The Save Mart Cos., Loblaw Cos., 7-Eleven, Albertsons Cos., Stop & Shop and H-E-B.