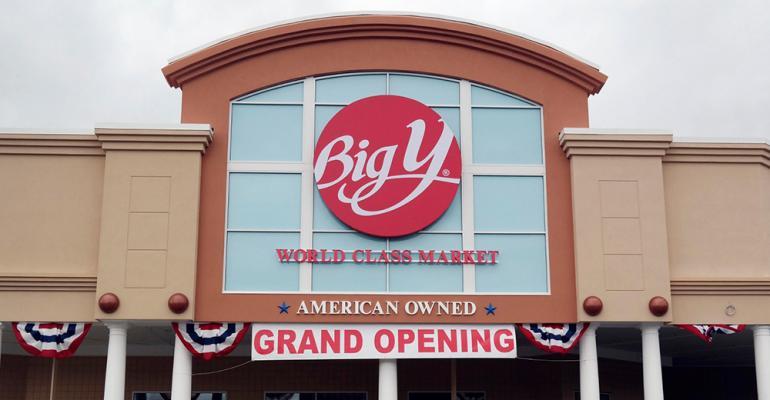 Big Y Foods
The robotics-driven facility, expected to be up and running in about six months, will abut the Big Y supermarket in Chicopee, Mass.
News>Online Retail

The robotics-powered facility, which will fill delivery orders, will abut the Big Y grocery store in Chicopee, Mass., according to Claire D’Amour-Daley, vice president of corporate communications. Though construction hasn’t started yet and no opening date has been set, the Takeoff MFC is expected to go into operation in about six months, she said.

“We are planning one facility adjacent to our Chicopee supermarket,” D’Amour-Daley said. “Right now, we are still in the planning stages.”

“We saw their operation in Florida and thought, ‘Hey, this is kind of interesting,’” she explained. “I would think any supermarket retailer these days is looking at e-commerce and what their e-commerce solution will be. So we thought that this was something worth trying.”

“Big Y is one of our end-to-end customers and a very successful regional player,” he said. “We’re happy to have them in our portfolio of retail partners.”

In the United States, Takeoff already has opened MFCs with Albertsons Cos. (Safeway), Ahold Delhaize USA (Stop & Shop) and Wakefern Food Corp. (ShopRite), and more facilities with those grocery retailers are planned. This year, Takeoff and Loblaw Cos. also are slated to pilot an automated warehouse now being built inside a Real Canadian Superstore in greater Toronto.

Built in existing stores or as a stand-alone facility, Takeoff’s MFCs typically run 10,000 to 14,000 square feet and are designed to hold up to 30,000 items. Compared with other fulfillment schemes for online grocery, such as a centralized model, MFCs offer a lower cost to build, faster rollout timetable and quicker time to serve, since the facilities are located near shoppers. 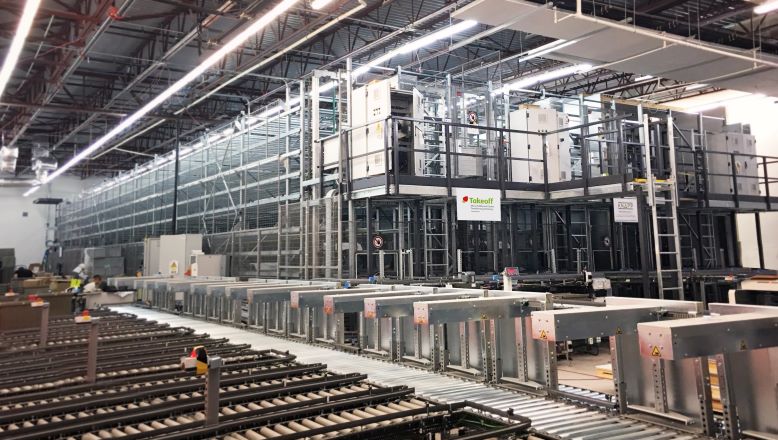 Demand has been strong because the MFCs combine the proximity of brick-and-mortar stores with the productivity of a large automated warehouse, according to Aguerrevere. He said Takeoff’s facilities, also called hyperlocal fulfillment centers, usually take 12 weeks to deploy at a cost of $3 million to $4 million.

“We are soon to have 10 facilities live in North America, and we have a pipeline of 50 facilities to be opened by Q1 next year,” he said. “Most of our clients are top 50 grocery companies, with programs in place for five to 10 units per year.”

Takeoff said its artificial intelligence-enabled robots can assemble grocery orders of up to 60 items in less than five minutes, a fraction of the speed and cost of current manual-picking options. In terms of volume, the automation can pick about 800 items per hour versus 60 items for manual in-store picking, and the system can process nearly 700 online grocery orders per day and 4,000 weekly per location for a two-hour service.

For the robotics technology, Takeoff has an exclusive agreement with Knapp, a global provider of automated warehouse solutions. This week, Knapp announced the expansion of its Kennesaw, Ga., facility as part of a U.S. operations growth plan to meet rising demand in grocery, retail, e-commerce and other sectors in North America.

Nine of Takeoff’s 11 customers worldwide are grocery retailers, and so far eight have been named: Big Y, Sedano’s, Albertsons, Ahold Delhaize USA, Wakefern and Loblaw in North America; Woolworths in Australia and New Zealand; and France-based Carrefour in the Mideast. Aguerrevere said Takeoff has another top-five grocery retail partner in North America, a public company, that it hasn’t disclosed yet.

Still, as shown by the partnerships with Big Y and Sedano’s, Takeoff will work with retailers of all sizes, Aguerrevere noted. “They're both using our end-to-end solution, from the user interface all the way to home delivery,” he said. “We’re very proud of working with regional players because we’re open for business for all kinds of players, the smaller ones and the bigger ones.”