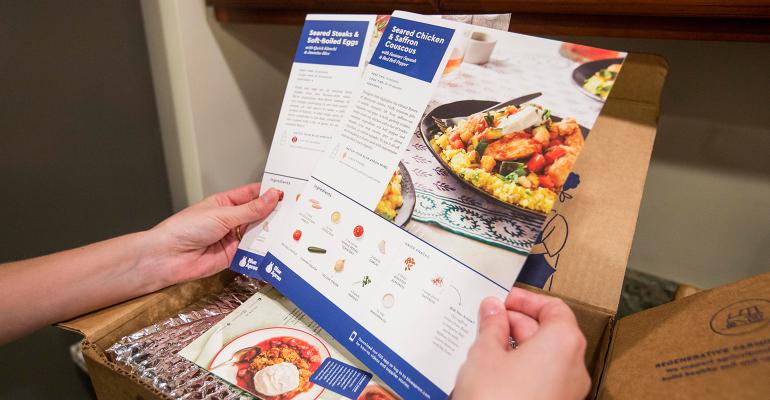 Home delivery meal kit service Blue Apron Holdings announced today that its net revenue decreased 13% year-over-year to $187.7 million in its four quarter, ended Dec. 31, 2017. The company said the decline was driven primarily by a decrease in customers and orders, as it substantially scaled back its marketing efforts last year to concentrate on operational issues at its new fulfillment center in Linden, N.J.

Cost of goods sold, excluding depreciation and amortization (COGS), decreased 11% year-over-year to $131.5 million in the quarter, driven largely by a decrease in the number of orders. As a percentage of net revenue, COGS increased by 190 basis points year-over-year from 68.2% to 70.1%, primarily due to an increase in labor costs driven by wage increases in its fulfilment centers. That was partially offset by a decrease in food and product packaging costs driven by operational improvements and more favorable pricing with suppliers.

Marketing expenses in the quarter were $25.2 million, or 13.4% of net revenue, compared to $37.1 million, or 17.2%, in the fourth quarter of 2016, reflecting the company’s planned reduction in marketing as it remained focused on driving operational improvements at its Linden facility.

Blue Apron reaccelerated marketing efforts in the final week of December as its operations continued to stabilize, including the launch of Blue Apron’s new national brand campaign.

“We are methodically implementing operational improvements to drive our business and are encouraged by the progress we’ve made since last quarter, particularly in margin which contributed to improvement in our bottom-line performance,” Brad Dickerson, CEO of New York-based Blue Apron Holdings, Inc., said in a statement.

“Our top priority remains continuing to drive operational efficiencies that will propel significant improvement in our net loss and adjusted EBITDA in 2018,” Dickerson said. “We also believe there are extensive opportunities to diversify and evolve the business in new ways to expand our reach and deepen our engagement with customers and we are sharpening our focus on these windows of opportunity.”

Market leader Blue Apron is one of the originators of the meal kit concept – subscription services which deliver all the premeasured ingredients necessary to make a gourmet entrée direct to the consumer’s door. However, in addition to logistics difficulties at its Linden plant, the company has faced increased competition from a growing host of competitors, including Plated, which was acquired last year by Albertsons, and Berlin, Germany-based Hello Fresh, the second largest player, which expects to surpass Blue Apron this year in the number of customers.

Blue Apron currently has 746,000 customers, down 15% from a year ago, and 13% from three months prior. At its peak in early 2017 it counted more than one million customers.