Amazon.com Inc.’s embrace of an omnichannel grocery strategy is paying dividends online, fueled in part by increasing availability of same-day delivery and store pickup. In May, Amazon launched Prime Now delivery from Whole Foods Market stores in 13 new metropolitan areas, enlarging coverage to 88 U.S. markets — with more to come in the months ahead.

Still, the latest food retail buzz for Amazon has centered on brick and mortar. Published reports said Amazon may open up to 3,000 Amazon Go stores by 2021 and launch a supermarket business outside of Whole Foods. In a report earlier this year, Edge by Ascential said Amazon’s overall grocery sales surged 45% in 2018, and 2019 could be the start of when “grocery finally hits” for the company.

The world’s largest retailer has kept its foot on the gas in its digital transformation. Grocery and consumables were just over half of Walmart’s U.S. sales (including Sam’s Club) in fiscal 2019, and the company is pushing to make those products as easily accessible as possible.

U.S. online grocery delivery expanded to about 800 locations and pickup to more than 2,100 locations in fiscal 2019. Walmart expects to have 1,600 delivery and 3,100 pickup sites by the end of fiscal 2020. “We've learned that those customers who shop with us both in stores and online spend about twice as much in total, and they spend more in our stores,” McMillon noted.

The Kroger Co. has gone all-in on e-commerce. So it’s not surprising to see the largest U.S. grocer post the biggest year-over-year gain in SN’s Digital Top 10. Kroger, in fact, has become a headline-grabber in digital innovation (with partners such as Nuro, Ocado and Microsoft) as well as data analytics via its 84.51° subsidiary. As of its fiscal 2018 year-end, Kroger had rolled out online grocery pickup to 1,581 of its 2,764 stores and expanded home delivery to 91% of customer households.

Ahold Delhaize last year shifted into high gear on e-commerce. At Ahold Delhaize USA, e-commerce sales growth is projected to top 20% in 2019 and 30% in 2020, with an estimated 65% of U.S. customers slated to have same-day or faster online grocery access by 2020. The company’s U.S. online grocery arm, Peapod, generates about $1 billion in sales and 6 million orders annually, serving customers and stores via 26 e-commerce fulfillment centers.

HelloFresh has carried the momentum from its booming U.S. growth last year into 2019. The Berlin-based meal kit company, the world’s largest, saw U.S. revenue jump 41.3% (constant currency) to $821.2 million in 2018. The U.S. segment experienced “an especially strong increase” in active customers of 28% from Q4 2018 to Q1 2019, HelloFresh noted. “This growth has been supported by a strong development of all three U.S. brands, including the successful ramp-up of the more recent EveryPlate and Green Chef brands,” the company said.

Steady expansion of online grocery access has helped Costco propel e-commerce sales, which swelled 26% for the fiscal 2019 first half after surging more than 31% in the 2018 fiscal year. The warehouse club chain offers two-day delivery via its CostcoGrocery service, launched in October 2017, and same-day delivery via Instacart. E-commerce now accounts for 5% to 6% of Costco’s business, and the company is bolstering operations to support online channel growth.

After a transition year, FreshDirect has turned its focus to growth. In July 2018, the online grocer completed the move of its headquarters to a state-of-the-art, 400,000-square-foot campus in the Bronx, N.Y. New CEO and Co-founder David McInerney said the highly automated facility enhances FreshDirect’s ability to provide “farm to fork” food distribution, add thousands of new products and serve new market areas via its FreshDirect, FoodKick and FreshDirect At The Office brands.

Struggling Blue Apron continues to tread water in a meal kit market increasingly shifting from online subscriptions to retail distribution. Blue Apron closed out fiscal 2018 with a 24% drop in revenue to $667.6 million and shrunk its net loss 42% to $122.1 million. The company has some encouraging signs as average order value, orders per customer and average revenue per customer are holding steady to slightly up. New partnerships with Jet.com and Weight Watchers have shown promise on the sales side, although a pilot of Blue Apron meal kits in Costco warehouse clubs was halted in November.

Albertsons Cos. has remained laser-focused on e-commerce. For the 2018 fourth quarter and fiscal year, its e-commerce sales surged 52% and 83%, respectively.  Albertsons has formed some key technology partnerships, including with Microsoft to help create a seamless multichannel shopping. The retailer also has launched an Instacart-powered e-store for its organic own brands, piloted delivery of deli meals via Grubhub and enabled customer tracking of online grocery orders using location-sharing technology from Glympse.

Robust online grocery sales growth reflects Target’s prowess as an elite omnichannel retailer. In 2018, overall digital sales jumped 31% for the fourth quarter and 36% for the year, topping $5 billion. During the year, Target expanded its Drive Up click-and-collect service to about 1,000 stores and same-day grocery and merchandise delivery from its Shipt subsidiary to over 1,500 of its stores. Shipt, which also provides delivery to a host of other grocery retailers, now reaches more than 80 million households in 250-plus markets. 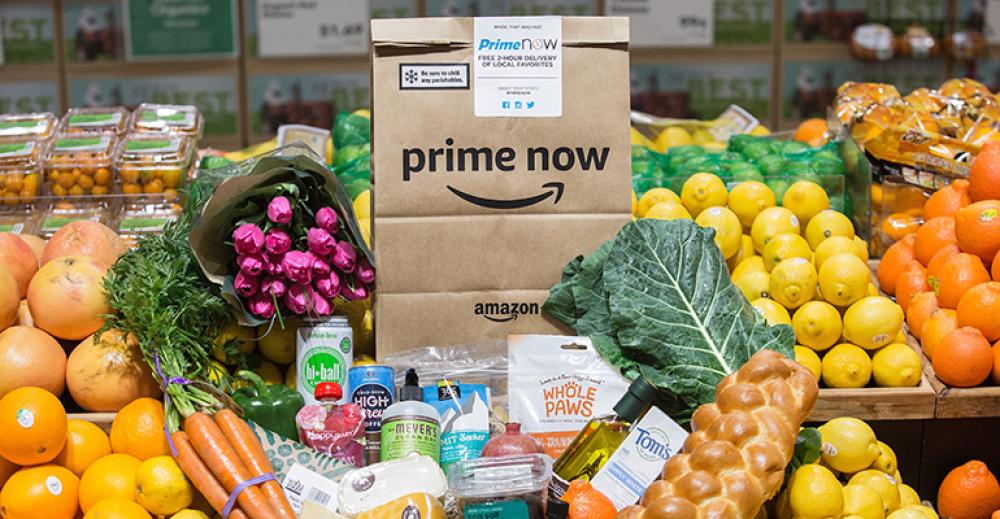