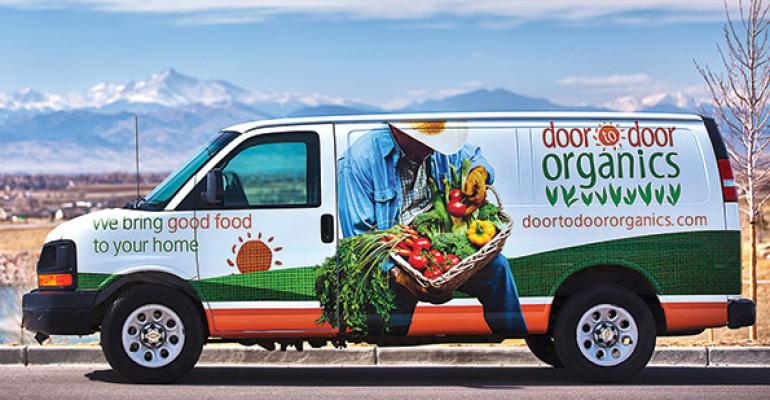 Door to Door Organics is preparing to launch a new delivery test in which it will partner with United Parcel Service (UPS) to make deliveries from its four warehouses around the country, said Mike Demko, the newly appointed CEO. “Via UPS, we actually can reach probably 98% of the United States,” he said, noting that the expanded delivery capability was one element of a plan to double the company’s revenues in 2018.

Door to Door, based in Louisville, Colo., currently serves customers in 17 states in the West, Midwest, East Coast and Washington, D.C. The company uses its own fleet of trucks to deliver from its distribution centers in Lafayette, Colo.; Detroit; Montgomeryville, Pa.; and Kansas City, Mo.

The UPS delivery test will begin by year-end in the Northeastern U.S., with plans to roll it out to other regions in 2018, Demko said.

The move comes against the backdrop of increased investor skepticism around grocery e-commerce companies, he said, in light of Amazon’s acquisition of Whole Foods Market earlier this year.

“From my perspective, the Amazon-Whole Foods deal will just continue to drive awareness for the channel, which is a good thing,” said Demko. “I understand it makes some investors nervous, given Amazon's strength. Focusing on our differentiators becomes part of the story as we slowly go out there and raise capital.”

The company is in the middle of $20 million Series C round of funding, according a report last week in the Boulder Daily Camera. Demko declined to discuss details of Door to Door’s efforts to raise funding.

Demko declined to reveal Door to Door’s current sales volume or customer counts, but he said the number of customers is projected to increase by a little less than 100% in 2018 as some of the projected growth would come from increased basket size.

The company’s new meal planning service, in which customers can build their order via suggested recipes, is an important component of the growth strategy.

“There's a lot of opportunity to grow within our current footprint, and that's where I think the meal planning solution plays an important role,” said Demko.

The new meal planning functionality provides recipe suggestions based on items in a shopper’s cart, and allows customers to add ingredients to complete a meal. The service is expected to drive bigger baskets while making shopping more convenient and efficient for customers, Demko said.

“They have the ability to modify the basket, based upon the recipes that they choose, and maximize the use of the food in their basket, because their items are common to multiple recipes,” he explained.

New COO to help with growth “We're trying to grow our business by 100% year over year, and that requires some really thoughtful planning and execution around the operation itself,” said Demko. “We’re bringing on Scott to help oversee that growth from a distribution center point of view, in terms of people, process and systems.”

During the past year Door to Door has adopted the proprietary technology platform of Relay Foods, the online grocery company that Door to Door had acquired last year. The platform had “solved some of the challenges” around e-commerce ordering, he said, and also delivers strong customer analytics, which helps fuel the company’s digitally based marketing efforts.

Although Demko conceded that the Relay acquisition got off to a “rocky start,” he said things are proceeding more smoothly now. He said the company remains open to acquisition opportunities.

Demko said the company is not yet considering an initial public offering for Door to Door.

“I think we're not yet there,” he said. “How and when the business exits — be it an IPO or through an acquisition — those are things that are sort of not top of mind right now. The focus is on raising capital to continue funding the growth of the business.”

Demko said he sees online grocery as still being in its infancy, with a lot of opportunity ahead. The challenges involved in delivering fresh, local foods to customers are part of what attracted him to Door to Door, he said.

“We're strong in organics and natural. We're strong in local. I think customers are thinking more and more about where does their food come from, and how they can support their local community from a food perspective,” he said. That is an interesting facet of Door to Door and why I'm here.”