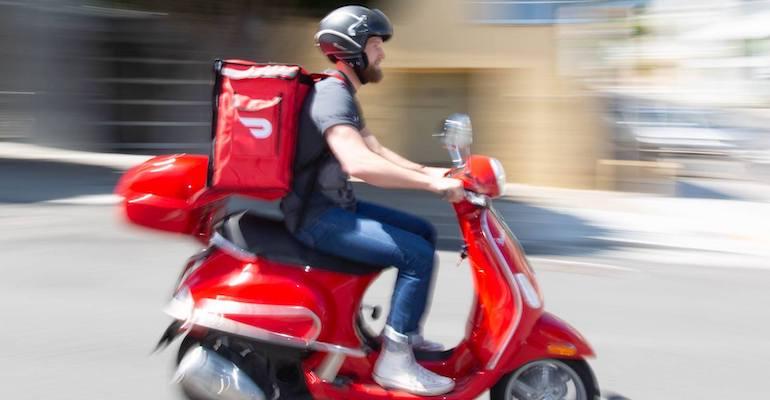 DoorDash
DoorDash expects to raise up to $2.81 billion in its initial public offering of 33 million shares.
News>Online Retail

San Francisco-based DoorDash said Monday that it’s offering 33 million shares of Class A common stock at an expected share price of $75 to $85, for a total IPO of $2.48 billion to $2.81 billion. The shares will trade on the New York Stock Exchange under the ticker symbol DASH.

DoorDash confidentially submitted a draft S-1 filing to the Securities and Exchange Commission in February and followed that up with an S-1 registration statement and prospectus filing on Nov. 13. The company’s last private valuation was $16 billion as of June, and through September it had raised funding of $2.5 billion. Goldman Sachs and J.P. Morgan are serving as lead book-running managers for the proposed IPO.

In August, DoorDash announced plans to expand its presence in the grocery delivery space with the launch of its DashPass subscription service, in which customers pay $9.99 per month for unlimited free deliveries for orders of at least $12.

Initial grocery retail partners for the new service include Smart & Final, Meijer, Fresh Thyme Market, Hy-Vee and Gristedes/D’Agostino. According to Fuad Hannon, head of new verticals at DoorDash, the first phase of the rollout will give more than 75 million Americans access to online ordering and delivery from a grocery store via DoorDash.

During the summer, DoorDash also launched delivery of food, groceries and other non-prescription products with drugstore giants CVS Pharmacy and Walgreens. And in April, DoorDash extended its reach in the retail sector with the launch of same-day delivery in the convenience store channel, including more than 1,800 stores of chains such as 7-Eleven, Circle K, Wawa and Casey’s.

Overall, DoorDash provides on-demand delivery and logistics services to local and national businesses in more than 4,000 cities and all 50 states across the United States, Canada and Australia. The company serves more than 18 million consumers and 390,000 merchants and fields over 1 million delivery personnel, known as Dashers. In its IPO prospectus, DoorDash reported a 50% U.S. market share in local food delivery logistics, compared with 26% for Uber Eats, 16% for Grubhub and 7% for Postmates, based on data from Edison Trends.