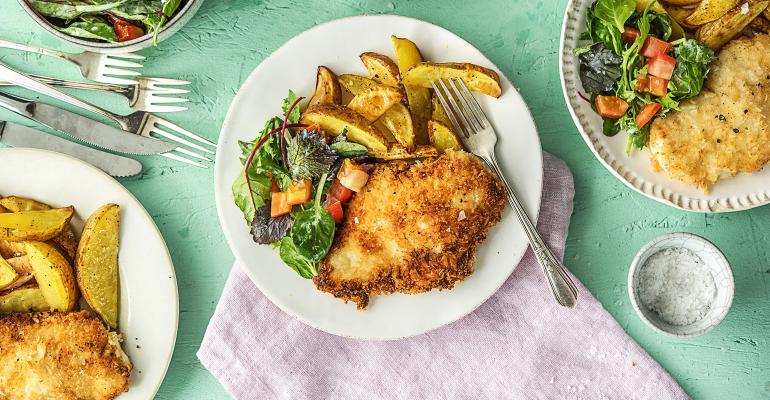 Multinational meal kit subscription service HelloFresh said its U.S. business nearly doubled in the last year, and that the company expects to break even by the end of the current fiscal year.

The Berlin-based company reported a 90.1% increase in U.S. revenues, to about $674 million, based on current exchange rates. The EBITDA loss for the year was about $50.1 million, an improvement over the year-ago EBITDA loss of about $59.4 million in 2016.

That compared with revenues of $881.2 million at New York-based rival Blue Apron, which reported a loss of $210.1 million for the recently ended fiscal year.

Overall, the company, which also operates in the UK, Germany, the Netherlands, Belgium, Luxembourg, Australia, Austria, Switzerland and Canada, said its revenues were up 52% to 905 million euros, or about $1.1 billion U.S.

“2017 marks the most successful year for our business to date. Not only did we successfully list our company on the stock market but we also significantly improved all our key metrics,” said Dominik Richter, CEO and co-founder of HelloFresh, in a statement.

HelloFresh had an initial public offering on the Frankfurt Stock Exchange in Germany in November, a few months after Blue Apron went public. While shares of Blue Apron have plunged, shares of HelloFresh are up about 40% since the IPO as the company has continued to grow its revenues at a rapid pace.

HelloFresh said it expects to break even in the fourth quarter of the current fiscal year and grow revenues by about 25% to 30%.

Shortly before disclosing its fiscal 2017 financial results, HelloFresh said it had reached an agreement to acquire Green Chef Corp., a Boulder, Colo.-based meal kit company that features organic ingredients and meals that conform to specific diets, such as vegan, Keto and Paleo.

The acquisition will help the company expand its customer base in a lucrative niche, HelloFresh executives told the Financial Times of London.

In a recent report on the meal kit market, research firm Nielsen said 36% of consumers who have purchased meal kits either in stores or online said the availability of diet-specific foods is extremely important in their decision to purchase a meal kit.

HelloFresh said the Green Chef acquisition would add about $15 million per quarter to the company’s revenues and to decrease the company’s EBITDA margins by about two percentage points in the second quarter, and to be “broadly neutral” to margins in 2019.

Meal kit companies such as Blue Apron and HelloFresh have struggled to retain customers through their subscription models, which require customers to purchase a minimum number of meals per week. Customers tend to sign up to take advantage of introductory offers and eventually cancel the services for a variety of reasons, including a perceived lack of choice around what meals are delivered, according to reports.

That has led Blue Apron to adjust its operating model and pursue potential distribution in retail stores — a strategy HelloFresh has experimented with in Europe. Last March HelloFresh rolled out a test of offering meal kits in 35 outlets of UK retailer Sainsbury’s, but the kits were pulled from stores by year-end, according to reports.

Meanwhile, U.S. retailers continue to ramp up their own meal kit offerings. In the past week both Thibodaux, La.-based Rouses Markets and Keasbey, N.J.-based ShopRite unveiled new meal kit programs.

Rouses’ said the kits, which contain most of the ingredients required to prepare a dinner for two in about 30 minutes, are available in its deli or prepared foods departments and are priced at $14 to $20. Varieties include Blackened Shrimp Pasta, Chicken Teriyaki with Egg Rolls, Chicken Fajitas, Chicken with Greek Orzo Pasta Salad, and Lemon Pepper Salmon with Kale and Beet Salad.

Select ShopRite stores, meanwhile, have rolled out a variety of meal kits for between two and four people under the Chefs’ Menu label, and priced at around $13.99. Varieties include Thai Coconut Chicken, Chicken Marsala, Korean Beef Stir Fry, Moroccan Chicken and Pork Scaloppini. The company said the meal kits meet USDA recommended dietary guidelines and have been approved by ShopRite’s team of corporate and in-store dietitians.

Rouses and ShopRite join a growing number of retailers offering meal kits, and earlier this year Walmart said it would roll out its own line of meal kits 2,000 locations my year-end.

According to the Nielsen report, in-store meal kits generated $154.6 million in sales in 2017, an increase of more than 26% over year-ago results.

The kits capitalize “on consumer desires for fast and fresh, in addition to the growing popularity of pre-portioned ingredients for complete meal prep at home,” Nielsen said in the report.

“We will see meal kit services and retailers tightening their relationship,” he said.