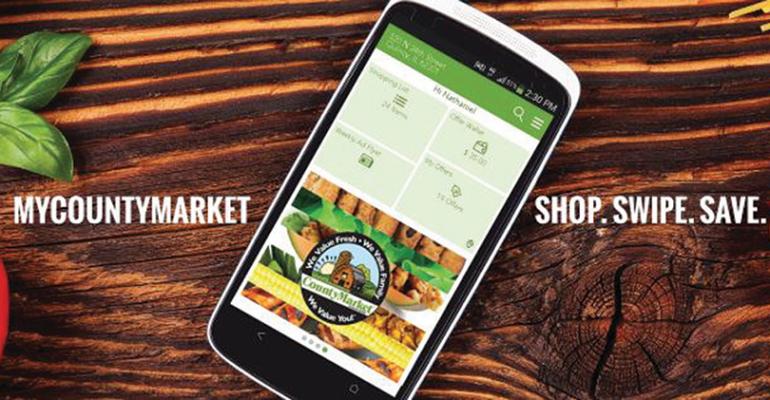 Niemann Foods
The myCountyMarket app has 10,000 active users every month, which is three times the engaged audience Niemann Foods’ County Market had just one year ago.
News>Online Retail

Customers who use the app scan items with their smartphones as they shop. When they are ready to check out, they head to a check stand and scan a checkout code, then pay with Apple Pay or a credit card.

Although shoppers who’ve downloaded and used the app seem excited about it, use of the app seems to fall off over time, according to Holzheu.

He hopes that the ability to order deli items with the app will get shoppers in the habit of using it more. The feature should be up and running in the next couple of months.

Niemann Foods’ County Market is also developing clever ways to incite trial of its myCountyMarket app that works with beacon technology, which pushes location-specific offers to users’ mobile devices as they travel throughout the store.

To take advantage of the savings, users must scan their loyalty card when purchasing the product. They then accumulate savings in their “offer wallet” within the app. Once they hit a certain level they’ll be given a voucher that can be used on a future shopping trip.

Redemption rates have been 10 to 20 times what a normal coupon would be, according to Nathaniel Jones, electronic marketing manager for Niemann Foods.

He is helping improve app use by partnering with non-competitive local businesses who adopt beacon technology. Visitors that download the retailer’s app are able to receive location-specific offers when they visit these venues.

“We’re partnering with Knight’s Action Park in Springfield, Ill., this upcoming spring/summer season to put beacons and run the myCountyMarket app with park-specific offers,” said Jones. “From the water park to drive-in theater to the amusement and putt putt … this gives them a lot of options to reach their customers in different areas of the park.”

The retailer’s app has 10,000 active users every month, which is triple the engaged audience it had one year ago, according to Jones.