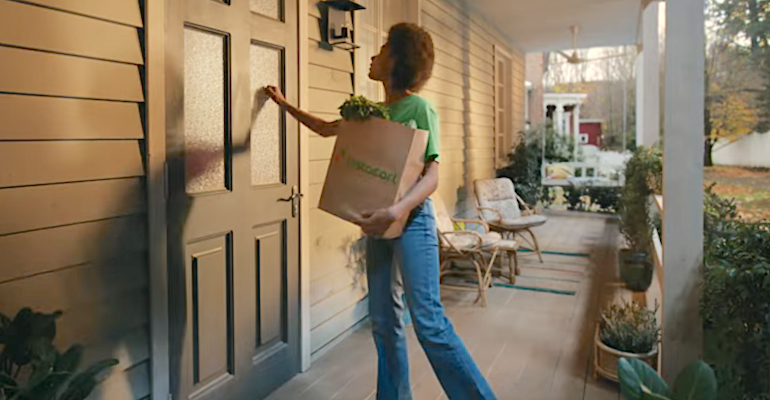 ‘How Homemade is Made’ puts the spotlight on mealtime

Titled “How Homemade Is Made,” the multimedia campaign will run through the holiday season and includes TV commercials, online video (YouTube), paid social media, influencer marketing (#HowHomemadeIsMade), programmatic advertising, and digital out-of-home (OOH) activations, which will run through the holiday season, Instacart said Monday. Sixty- and 30-second TV spots are scheduled to air Nov. 14 to Jan. 2 on ABC, CBS and NBC networks.

Related: Instacart offers new ways for consumers to save on grocery shopping

The campaign’s theme focuses on the “power of meals” to bring people together and reinforces Instacart’s brand proposition of delivering the ingredients that allow peole to “share love through food” and “celebrate the moments that only happen at home,” the San Francisco-based company said.

“Just in time for the biggest food and family holiday of the year, we’re proud to unveil ‘How Homemade is Made,’ our first fully integrated brand campaign that captures the love and joy that comes from enjoying a beloved family recipe,” Instacart CEO Fidji Simo said in a statement.

“To date, Instacart’s sweet spot has been unmatched speed and selection, which has served millions of busy customers well as they discovered the time-saving convenience of online grocery. Over the course of the pandemic, many people rediscovered the joy of cooking at home, whether serving up a favorite recipe or trying their hand at a fun new food trend,” Simo explained. “As we look ahead, Instacart’s opportunity is to partner with grocery retailers to also inspire people across all of their food needs, whether it’s cooking your mom’s short ribs or putting together a quick lunch box for your kids. With this campaign, we hope to remind people that food is more than sustenance; it’s an opportunity for human connection.”

To drive further customer engagement, all meals shown in the ads will be “instantly shoppable” via live QR codes that take customers to a recipe with product links on the Instacart app. Instacart said it also has refreshed its visual identity, including images of “craveable, mouth-watering food” shared in familiar settings among family and friends into brand creative and the Instacart app. 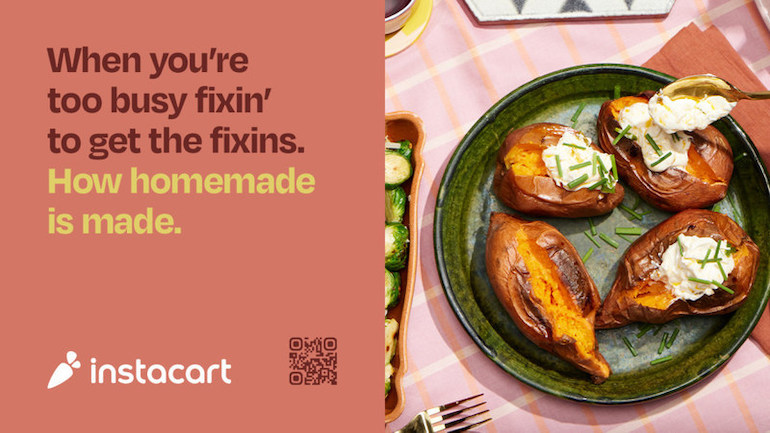 Meals shown in the campaign's ads will be 'instantly shoppable' via live QR codes that take customers to a recipe with product links on the Instacart app.

The “How Homemade Is Made” message is conveyed in a new film created with Goodby Silverstein & Partners (GS&P) and directed by award-winning director Ian Pons Jewell, Instacart added. The company said its new brand strategy was developed with TwentyFirstCenturyBrand and the campaign with GS&P, GroupM led the media planning and execution, while the social media and influencer campaign was developed with Media.Monks.

“Instacart combines the speed and convenience of technology with one of the most emotionally resonant human experiences: the shared meal with loved ones," stated Rich Silverstein, co-founder and co-chairman of GS&P. “We developed the ‘How Homemade Is Made’ campaign to highlight how the traditional concepts of food, family and shared meals that we know consumers crave can not only live alongside modern technology, but actually be fueled by it.”

The nation’s largest third-party online grocery delivery provider, Instacart partners with more than 600 North American retailers — including 175 local, regional and national grocers— and delivers from almost 55,000 stores in over 5,500 cities in the United States and Canada. Its online shopping and delivery services are accessible to more than 85% of U.S. households and 90% of Canadian households.