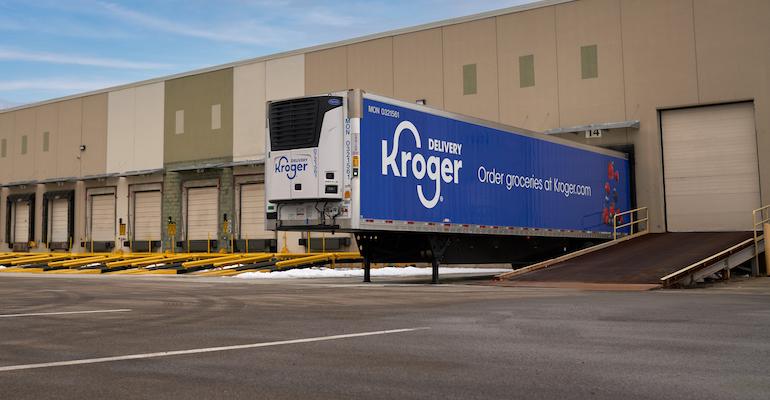 Kroger
The 50,000 square-foot Louisville spoke is the second, along with a site in Indianapolis (see above), to work with Kroger's Ocado-powered customer fulfillment center in Monroe, Ohio.
News>Online Retail

The Kroger Co. has expanded its Kroger Delivery network with the opening of an Ocado-automated “spoke” facility in Louisville, Ky.

Kroger said Wednesday that the 50,000 square-foot facility will support its Ocado-powered customer fulfillment center (CFC) in Monroe, Ohio, serving as a last-mile cross-dock site for fresh food delivery and extending the reach of delivery service to more customers in the greater Louisville area.

“Kroger Delivery is part of our rapidly expanding seamless ecosystem that provides customers with fresh and quality products — anytime and anywhere,” Bill Bennett, vice president and head of e-commerce at Cincinnati-based Kroger, said in a statement. “We are thrilled to expand Kroger’s offerings to more Louisville customers with a truly differentiated customer experience.”

Plans for the Louisville spoke, which will employ up to 161 full-time associates, were announced in January. The site marks the second auxiliary location working with the 375,000-square-foot Monroe CFC, which went live in April 2021 and was the first hub to open under the Kroger’s four-year-old e-commerce partnership with United Kingdom-based Ocado Group. In December, a 48,000-square-foot spoke went into operation in Indianapolis to support fresh food delivery in central Indiana, mostly in the Indianapolis area but also in Richmond, Ind., which is near the Monroe CFC.

Including the Louisville and Indianapolis locations, Kroger so far has announced 12 spoke sites, which the company said enlarge the service radius of CFCs by about 90 miles. Five spokes are now live — in Miami, Tampa and Jacksonville, Fla.; Lockbourne, Ohio; and Indianapolis — and another five are planned for Louisville, Ky.; Oklahoma City; and Austin and San Antonio, Texas, and Birmingham, Ala. The Oklahoma City facility will allow Kroger to serve a 36th state, Oklahoma, where it currently lacks brick-and-mortar stores.

In mid-July, Kroger also unveiled plans for spoke fulfillment facilities in Tennessee and Illinois. A 40,000-square-foot spoke in Nashville, Tenn., will work with the 375,000-square-foot CFC in Forest Park, Ga., which opened this past February. The Nashville site will extend delivery service in the greater Nashville area to customers up to 200 miles from the CFC hub. A bigger spoke site in Maywood, Ill., sized at nearly 80,000 square feet, will support Kroger’s 340,000-square-foot CFC in Pleasant Prairie, Wis., which went live in late June. The supermarket giant said the Maywood spoke will enable Kroger Delivery to reach customers in the Chicago metropolitan area. Kroger didn’t give an opening time frame for the new spokes in Tennessee and Illinois.

Ocado and Kroger announced their partnership in May 2018. At the time, the companies said they planned to open 20 CFCs in the United States over the following three years. The Ocado CFCs and supporting facilities use vertical integration, machine learning and robotics to process online grocery orders and stand to extend Kroger’s reach to a larger geographic footprint, including areas where it doesn’t operate physical stores.

Thus far, Kroger has reported 17 Ocado-driven CFCs, with six now operational. Besides recently opened locations in Dallas and Detroit, they include the Monroe, Pleasant Prairie and Forest Park CFCs and a 375,000-square-foot CFC that opened in Groveland, Fla., in June 2021.

In early March, Kroger said it plans to construct a 270,000-square-foot, “Cleveland region” CFC that will serve areas in northeastern Ohio and Pennsylvania, with the latter representing the grocer’s 37th state. And then last month, a nearly 300,000-square-foot CFC was announced for Aurora, Colo.

Other Ocado CFCs announced by Kroger include locations in Frederick, Md.; Phoenix; Charlotte, N.C.; the Pacific Northwest; and the Northeast, the latter representing another location where Kroger lacks stores, along with Pennsylvania and Florida (save for a Harris Teeter store in the Jacksonville area). The retailer also has revealed plans for two CFCs in Southern California and two more in Florida.