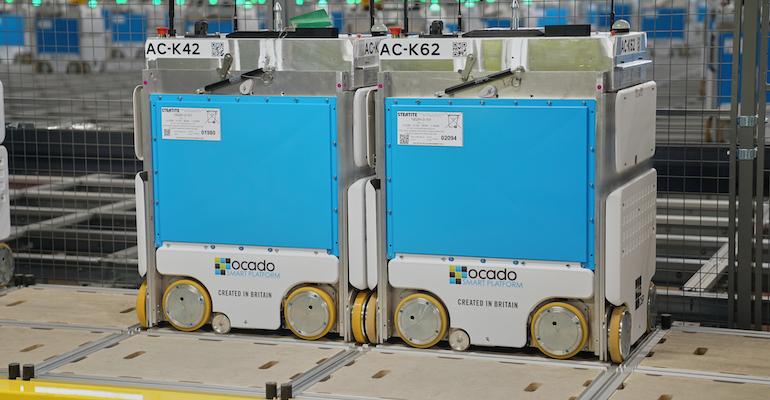 Two more automated “spoke” supporting facilities have been opened as The Kroger Co. continues to build out its e-commerce network driven by Ocado Group technology.

The Nashville spoke will work with Kroger 375,000-square-foot, Ocado-powered customer fulfillment center (CFC) in Forest Park, Ga., in the Atlanta area, increasing the Kroger Delivery network’s reach in greater Nashville to customers up to 200 miles from the CFC hub, which opened this past February.

“The continued expansion of the Kroger fulfillment network means improved access to fresh food for customers eager for the variety and value offered by Kroger that once could only be accessed through our stores,” Gabriel Arreaga, senior vice president and chief supply chain officer at Kroger, said in a statement. “This network enables Kroger to add scale, achieve reliability of experience, gain from the benefits of automation and ultimately widen our customer reach in current operating regions and new parts of the U.S.”

Overall, Kroger has announced 12 Ocado-automated spokes of 40,000 to 80,000 square feet, with nine now live. Besides the Nashville and Maywood locations, the operational spoke facilities are in Miami, Tampa and Jacksonville, Fla.; Lockbourne, Ohio; Indianapolis; Louisville, Ky.; and San Antonio. Other spokes are slated to open in Oklahoma City; Austin, Texas; and Birmingham, Ala.

In May 2018, Kroger unveiled an exclusive U.S. partnership with U.K.-based online grocery specialist Ocado to identify sites for about 20 automated CFCs over the ensuing three years. The high-tech CFCs use Ocado’s vertical integration, machine learning and robotics to fill e-grocery delivery orders and extend Kroger’s reach to a larger geographic footprint, including areas where it doesn’t operate brick-and-mortar stores.

So far, Kroger has announced 17 CFCs — ranging from 135,000 to 375,000 square feet — and six are now open. Kroger opened its first Ocado CFC, a 375,000-square-foot automated warehouse, or “shed,” in April 2021 in Monroe, Ohio. That was followed by 375,000-square-foot CFCs in Groveland, Fla., in June 2021 and in Forest Park, Ga., this past February and a 340,000-square-foot CFC in Pleasant Prairie, Wis., in June. Most recently, CFCs of 135,000 and 350,000 square feet went operational in Romulus, Mich., and Dallas, respectively. The Groveland locations marked the first CFC opening in a state where Kroger doesn’t have physical stores (except for one Harris Teeter store in Jacksonville, Fla.).

Upcoming Ocado CFCs, Kroger reported, include locations in Frederick, Md.; Phoenix; Charlotte, N.C.; Aurora, Colo.; the Cleveland region; the Pacific Northwest; and the Northeast. The retailer, too, has announced plans for two CFCs in Southern California and two more in Florida.

“Kroger Delivery promises an unparalleled shopping and delivery experience, making fresh just one click away at Kroger.com or the Kroger app,” according to Bill Bennett, vice president and head of e-commerce at Kroger. “From personalized digital offers to our white-glove delivery service, the Kroger seamless ecosystem saves time and money. Kroger Delivery orders are brought to customers in our branded delivery trucks and delivered to their doorstep by our trained and uniformed associates, all with ‘zero compromise’.”