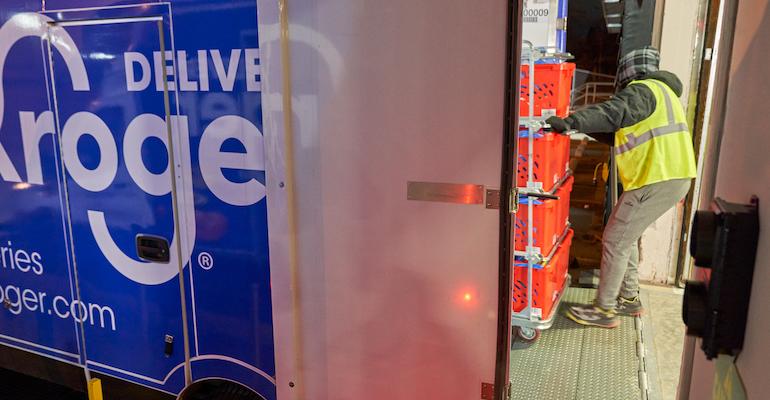 The Kroger Co.
From the spoke and hub facilities, packed online grocery orders are loaded into temperature-controlled Kroger Delivery vans that can hold up to 20 orders.
News>Online Retail

Building out its e-commerce fulfillment network, The Kroger Co. has gone live with its 10th Ocado-automated “spoke” site, located in Birmingham, Ala.

“Kroger Delivery starts by bringing the shopping experience to wherever our customers are, whether they are using the Kroger app or browsing our weekly ad at Kroger.com. Here, customers can access our seamless experience that promises an extensive assortment, thousands of digital coupons, and an entirely personalized shopping trip,” Bill Bennett, vice president and head of e-commerce at Cincinnati-based Kroger, said in a statement. “Through this zero-compromise service, customers can get fresh, affordable groceries brought to their door through a best-in-class, white-glove delivery experience, enabled by our refrigerated trucks and amazing trained drivers. This cutting-edge technology sets a new unmatched standard for grocery delivery.”

“For people who live in food deserts, getting groceries can be a real challenge. Eliminating the distance to the grocery store from the doorstep can positively impact our citizens who are most in need of healthy food options,” commented Cornell Wesley, director of the Department of Innovation and Economic Opportunity for the city of Birmingham. “As a community, we are excited about Kroger choosing Birmingham for this expansion and are eager to partner with them in exploring more ways to solve for food deserts.”

Overall, Kroger has announced 12 Ocado-automated spokes of 40,000 to 80,000 square feet. The spokes serve as last-mile cross-dock sites for e-grocery delivery and lengthen the service radius. Besides the Birmingham site, spoke facilities are now operational in Nashville, Tenn., and Maywood, Ill.; Miami, Tampa and Jacksonville, Fla.; Lockbourne, Ohio; Indianapolis; Louisville, Ky.; and San Antonio. Other spokes are slated to open in Oklahoma City and Austin,Texas.

The Oklahoma City spoke will bring Kroger into its 36th state, Oklahoma, where it doesn’t operate any brick-and-mortar stores. The 50,000-square-foot facility will support a 350,000-square-foot CFC in Dallas. According to Kroger, the Oklahoma City spoke will extend the reach of Kroger Delivery service from the Dallas CFC to customers up to 200 miles away.

In May 2018, Kroger unveiled an exclusive U.S. partnership with U.K.-based online grocery specialist Ocado to identify sites for about 20 automated CFCs over the ensuing three years. The high-tech CFCs use Ocado’s vertical integration, machine learning and robotics to fill e-grocery delivery orders and extend Kroger’s reach to a larger geographic footprint, including areas where it doesn’t operate physical stores.

So far, Kroger has announced 17 CFCs — ranging from 135,000 to 375,000 square feet — and six are now open. Kroger opened its first Ocado CFC, a 375,000-square-foot automated warehouse, in April 2021 in Monroe, Ohio. That was followed by 375,000-square-foot CFCs in Groveland, Fla., in June 2021 and in Forest Park, Ga., this past February and a 340,000-square-foot CFC in Pleasant Prairie, Wis., in June. Most recently, CFCs of 135,000 and 350,000 square feet went operational in Romulus, Mich., and Dallas, respectively. The Groveland locations marked the first CFC opening in a state where Kroger doesn’t have physical stores (except for one Harris Teeter store in Jacksonville, Fla.).

“Long term, one of our visions is to serve America, because we think everybody deserves fresh, affordable food,” Kroger Chairman and CEO Rodney McMullen told Supermarket News in a recent interview. “[The Ocado partnership] allows us to go into new markets with something different than what is already there and do it in a way that’s efficient. And you can scale off of it over time. So that’s one more way of taking care of customers and supporting communities.”