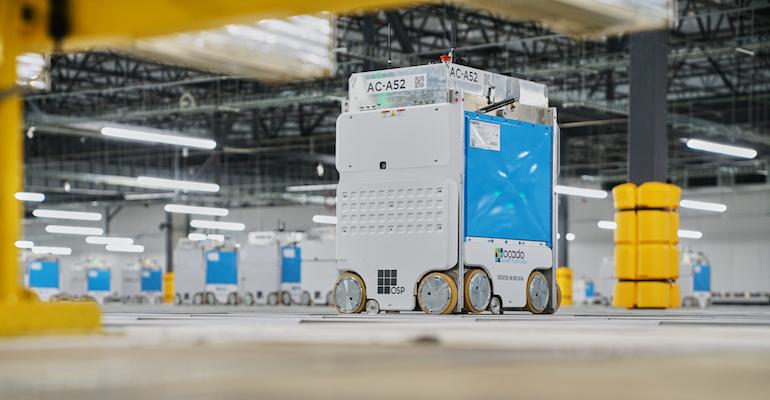 The Kroger Co.
With the launch of the Pleasant Prairie, Wis., facility, Kroger now has five Ocado-automated customer fulfillment centers in operation. The others are located in Monroe, Ohio; Groveland, Fla.; Forest Park, Ga.; and Dallas.
News>Online Retail

Cincinnati-based Kroger said yesterday that the nearly 340,000-square-foot CFC, had announced in November 2019, will provide Kroger Delivery e-grocery service to customers in Wisconsin, northern Illinois and northwest Indiana. The company had said last week that the facility initiated operations when it announced plans for a nearly 300,000-square-foot CFC in Aurora, Colo., serving the Denver area.

“We are thrilled to launch Kroger Delivery in Pleasant Prairie, continuing our long-standing engagement in the state of Wisconsin. Our tradition of fresh is all about our customers, and this true milestone moment incorporates end-to-end cold solutions, including customized refrigerated vans, providing Kenosha County residents with everything fresh, every time,” Gabriel Arreaga, senior vice president and chief supply chain officer at Kroger, said in a statement. “Through the incredible relationships with several local departments including Kenosha County and the Village of Pleasant Prairie, this collaboration was key to success that will bring nearly 250 jobs to the 336,840-square-foot, high-tech fulfillment center and will enable us to expand our delivery services to new areas in the region in need of our best-in-class service.”

Thus far, Kroger has announced 17 Ocado-driven CFCs, with five now operational. Besides the Pleasant Prairie location, they include a CFC in Monroe, Ohio — Kroger's first Ocado facility — that went live in April 2021; 375,000-square-foot CFCs that opened in Groveland, Fla., last June and in Forest Park, Ga., this past February; and 350,000-square-foot CFC that launched in Dallas this spring. In early March, Kroger said it plans to construct a 270,000-square-foot, “Cleveland region” CFC that will serve areas in northeastern Ohio and Pennsylvania, with the latter representing the grocer’s 37th state.

“Through our growing partnership, we are helping Kroger Delivery to introduce a world-leading online grocery proposition to their customers across the USA,” stated Luke Jensen, CEO of Ocado Solutions, which has its U.S. headquarters in Tyson, Va. “Enabled by Ocado Group's unique, cutting-edge technology, this fulfillment center will introduce a step change in the kind of service and efficiency that shoppers across Wisconsin, northern Illinois and northwest Indiana can expect from grocery e-commerce.”