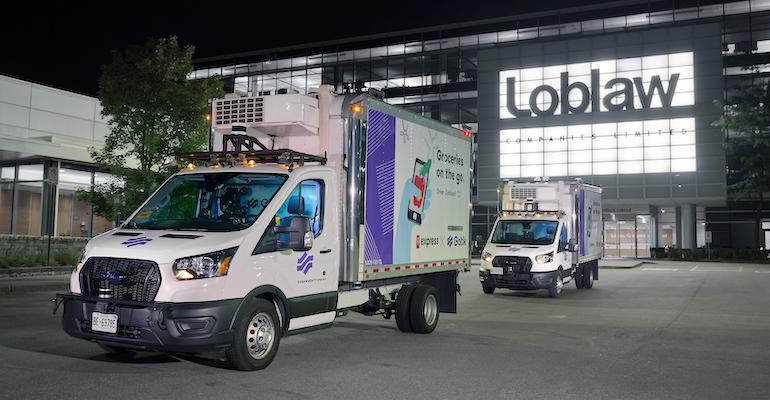 Loblaw/Gatik
Gatik said the deployment with Loblaw's PC Express service marks the first time that an autonomous trucking company has removed the safety driver from a daily delivery route in Canada.
News>Online Retail

Loblaw Cos. is taking care of both middle- and last-mile fulfillment as it builds out online grocery service.

And on Thursday, DoorDash announced the rollout of on-demand grocery delivery across much of Loblaw Cos.’ brick-and-mortar footprint.

Toronto-based Loblaw and Gatik kicked of their multiyear, self-driving technology partnership in early 2021. That January, Gatik began providing the grocer a contactless delivery solution for transporting multi-temperature goods from its automated picking site to stores across greater Toronto. The launch followed a 10-month on-road pilot in Toronto with one autonomous delivery truck. In the test, Gatik operated five trucks — with a safety driver as a co-pilot — for Loblaw up to seven days a week, 12 hours a day, on five routes, using public roads with fixed pickup and drop-off sites.

“Working with Gatik, we’ve demonstrated that autonomous driving technology enables supply chain efficiency, moving more orders more frequently for our customers,” David Markwell, chief technology and analytics officer at Loblaw Cos., said in a statement. “Being the first in Canada with this technology and deploying a fully driverless solution is exciting and illustrates our commitment to making grocery shopping better for customers.”

Loblaw noted that its launch of the autonomous service came after the company commissioned an “exhaustive” third-party safety and security review. The assessment of Gatik’s system included an evaluation of the end-to-end technology solution, development and deployment processes, standards and regulatory compliance, and risk assessment and evaluation of control measures, as well as physical component, subsystem and vehicle level testing. Currently, the autonomous vehicle industry awaits the implementation of common standards to evaluate and confirm the safety and security of thes systems before they are rolled out for broader adoption, Loblaw reported.

“Canada is on the cusp of enormous potential in the driverless commercial delivery space, a space that's being led by Loblaw,” commented Vivek Khindria, senior vice president of cyber security, networks and technology risk at Loblaw. “We commissioned a third-party independent assessment to validate the security and safety of Gatik's autonomous system and are pleased with the results.” 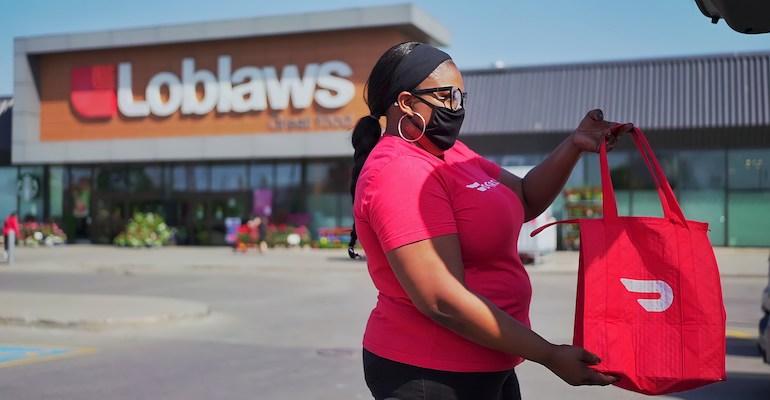 “Online grocery has changed. It is not a one-size fits all solution. Customers are looking for varying levels of convenience — orders within minutes, shopping from favorite apps and a seamless experience,” stated Galen Weston, president and chairman of Loblaw Cos. “DoorDash brings best-in-class logistics expertise and operational excellence to our extensive relationship, which makes them the ideal strategic partner for us to address our evolving needs as we look to get consumers exactly what they want when they want it.”

Loblaw will offer more than 50,000 grocery and convenience items from its stores for delivery via DoorDash, including fresh and prepared foods, groceries, floral, drugstore essentials and convenience items. In support of the service launch, through Oct. 23, customers will receive $10 off their orders of $40 or more from Loblaw banner stores on the DoorDash Marketplace app. DoorDash said all Loblaws, Shoppers Drug Mart, Real Canadian Superstore, Atlantic Superstore, Provigo and Maxi & Cie store products will be available to DashPass members for unlimited free delivery and reduced service fees on eligible orders that meet order minimums.

“Our collaboration with Loblaw brings 14 different banner stores on to the DoorDash Marketplace app for on-demand delivery, to nearly three quarters of consumers across Canada,” noted Tony Xu, co-founder and CEO of DoorDash. “We are excited to collaborate with the largest retailer in Canada and look forward to deepening the relationship.”