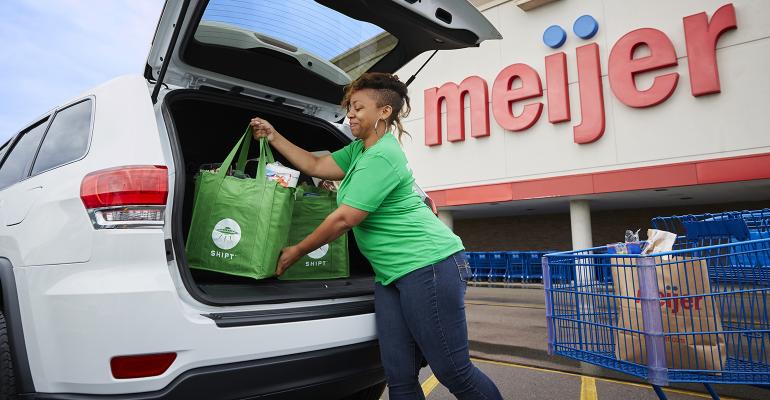 Photos courtesy of Meijer
Meijer is partnering with the concierge service Shipt in an online grocery delivery service in six states.
News>Online Retail

Meijer: ‘Convenience is winning’ in e-commerce

That’s the message from Meijer Inc., which last week announced ambitious plans to expand its online grocery and ordering and delivery service across its six-state Midwest service area.

The Grand Rapids, Mich.-based supercenter operator will debut e-commerce in Grand Rapids later this month, in Indianapolis and Fort Wayne, Ind. next month, and follow that with expansion to its other major markets in Michigan, Illinois, Indiana, Ohio, Kentucky and Wisconsin, using the concierge service Shipt as its partner.

Art Sebastian, Meijer’s director of digital shopping, told me the decision to expand was guided by results of a 25-store launch of mobile shopping and delivery with Shipt around Detroit last fall. Sebastian said the retailer was startled by how quickly its shoppers embraced the new option: Shipt has fulfilled more than 65,000 orders since its Sept. 15 launch, which over the period indicates Meijer’s seeing an average of 2,500 orders a week, or 100 orders per week per store, although Sebastian added that week-over-week figures have continued to increase since the launch. Those orders are coming from a combination of regular Meijer store shoppers and new customers, Sebastian added, although he declined to pinpoint the mix. “Quite frankly, we were impressed, surprised and pleased with the immediate demand of the service. I can tell you that leading into the launch in Detroit we had a significant number of members who had already downloaded the app and were ready to go on day one. It was record-breaking for Shipt. That was impressive, and we’re looking to see similar numbers as we move through additional markets.”

The expansion will take Meijer deeper into competition with other providers of grocery home delivery like Peapod, which operates in Indianapolis, and Kroger, which is expanding click-and-collect options and testing home delivery in some markets through Uber.

But in a world where omnichannel is becoming table stakes, Sebastian said Meijer would differentiate by applying the same approach to e-commerce as it does in stores, “by putting the customer at the center of everything we do.” Today, he says, that requires offering the option of fulfilling orders in the manner the customer wants from curbside pickup to in-store and delivery, with a “high-touch” service he says Shipt has provided: Bananas as ripe as the customer wants them, as soon as they want them.

This week we heard for the first time from new leaders at two companies that needed fresh perspective: Fairway Market and Sobeys. Both new bosses, Abel Porter and Michael Medline, respectively, essentially prescribed old-fashioned retail elbow grease to fix their problems, which isn’t a particularly unusual thing to hear from new bosses at troubled companies, even if one company has struggling stores in the Canadian prairies and the other in the Big Apple.

Another similarity that appears to have emerged between them is a seeming need to demonstrate someone’s behind the wheel again amid perception that professional management consultants have been running the show.

“We have to make the crucial and top decisions, not a consultant,” said Medline, who said the consultants at work now investigating internal cost reductions at Sobeys to “benchmark and push us and make us better, but at the end of the day they don't have to make the decisions. They don't have to run the company. And so I'm so glad that the consultants are here, but it's up to us to turn the fortunes of this company.”

Porter, in my interview, made no mention of consulting and its impact at Fairway, but observer Burt P. Flickinger III sure did. It’s his contention that professional fees are the enemy of Fairway’s turnaround, in that every dollar of a limited pool resources going there isn’t going to the pricing and marketing attention Fairway requires to contend.

If recent price checks in Philadelphia are any guide, competition that eased up in February is right back again in March, analyst Scott Mushkin of Wolfe Research said in a recent note.

Wolfe’s analysis of Philadelphia pricing indicated falling retailers there have been led by Target, which is beginning a $400 million price investment this year, and by ShopRite. Their prices for a basket of goods fell by 2.6% (Target) and 1.9% (ShopRite), when measured this month against the same items measured in February.

As compared to last March, prices in Philly are down by 1.1% overall, led by

Instacart to distribute health and safety kits to its shopper community
Apr 02, 2020