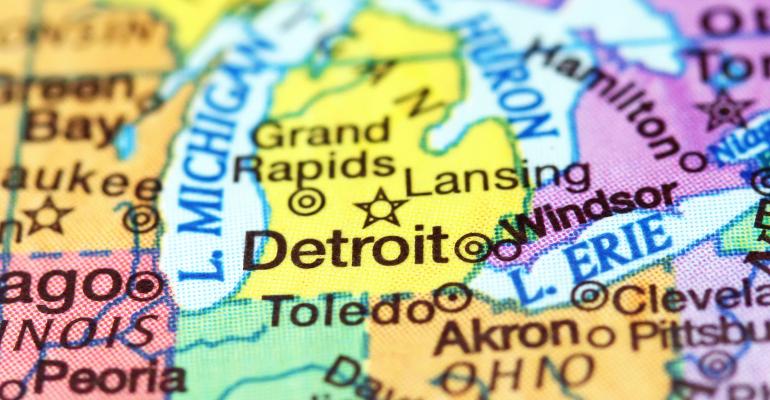 Meijer vs. the Curbside Crush, and other stories from Michigan

Pursuing the wisdom of students and innovative beer The tagline for this year’s Western Michigan University Food Marketing Conference was “Leading with Change” but I’ll submit that “confronting change” was the real theme. As I wrote about here, here and here, there was a clear recognition among attendees that they were suddenly operating in an environment that is very different than it was even a year ago, and to quote one presenter “the struggle to stay relevant” in this new world was a top concern. Following are 10 or fewer observations:

Meijer Inc., the Michigan institution headquartered at the conference’s home city in Grand Rapids, had a strong presence at the show.

Meijer was in the news just last week for having expanded grocery home delivery through Shipt, an evolution from the curbside pickup option it launched in some stores in 2015. According to Peter Whitsett, EVP of merchandising and marketing at Meijer, that change has put a spotlight on the huge demand for convenience, and the challenge for the big retailer to wrestle it economically.

When Meijer launched curbside, he said, “there were assumptions about incrementality. We thought this would be a fill-in trip. We were 180 degrees wrong. Customers said ‘do all my shopping for me.’

“Now you’ve got to run around a store that’s 200,000 square feet and our costs went up. So we raised the price and what happens? Customers said, ‘OK, I’ll order more.’ Our cost structure just continued to go up. So our ability to manage variable expense in the model has been a really interesting learn.”

The Shipt partnership, it should be noted, limits selection to 55,000 grocery SKUs and provides a personal touch of workers who bring orders not to the door but the kitchen counter.

“This is stretching our ability to say we’re not only a retailer of goods, but we’re a retailer of services,” Whitsett said. “I think this whole notion of relationship, and personalization, and our ability to learn how to price for service, and not just goods, is going to lead to success.”

What you want to be when you grow up

The presence of current students, and WMU food management graduates like Sam’s Club consumables VP Trent Weller — class of 1995, and recipient of the conference’s annual distinguished alumni award — further imbued a sense that change was afoot.

A speaker urged industry attendees to ask students what apps they were using, and that led to my downloading Flipp, an aggregator of food retail circulars which if nothing else, ought to boost my investigative productivity. My completely unscientific poll of the students I met indicated an even split between those who aspired to work for retailers vs. those who hoped to be hired by a CPG company, which would indicate — observationally anyway — retail’s profile has gained a little since I last wrote about this topic several years ago. Things change. One student said she didn’t particularly care whether it was a retailer or a supplier she went to work for, as long as she could do analytics, which seemed to me like a pretty good career decision already.

Part of the change people kept talking about was impact on the physical landscape now that e-commerce and mobile technology are stitched into how people shop.

When sales go virtual, does store location matter? Maybe not as much as we once thought, according to a report by the Coca-Cola Research Council, presented at the event. Judy Spires, CEO of Kings and Balducci’s, said that insight highlighted the importance of meeting other consumer needs. “You really have to have a compelling value proposition – give people what they need, when the want it, the way they want it,” Spires said. “That’s different from, ‘C’mon down, Mom, and see our A-1 location.’”

Larry Levin, EVP of business development at IRI, noted that the omnichannel world would shift sales of supermarket goods — edibles and non-edibles — to the online channel at different speeds, with edibles generally slower to move, but moving all the same. According to IRI’s figures, the multi-outlet retailers controlling 98.6% of the market for such goods in 2015 will see their share dip to 95% in 2020 and to 89.9% by 2022. By then, 3.5% of edible share — and 6.5% of non-edibles — will belong to e-commerce. Who would that effect? Gigantic stores like Meijer for one.

In general, superstores like Walmart, Meijer and Target will grow even more slowly than traditional supermarkets going forward, Kantar Retail’s Bryan Gildenberg noted. Although both those formats, along with drugstores, will lag growth among club stores, discount stores and convenience stores.

Away from the show I visited the home of a retail phenomenon: Founders Brewery. The Grand Rapids-based brewer made a local reputation on flavorful, high-alcohol brews that sparked the craft craze, but found nationwide success behind an innovative twist: A lighter, lower-alcohol interpretation of India Pale Ale pioneering a category today known as “session IPAs.” Your store probably sells a lot of Founders’ All Day IPA today, which cleverly bridged a gap between that big group of domestic beer drinkers turned off by aggressive craft styles, and craft enthusiasts who want easy-drinking authenticity — all at the relative value of the “brewer’s dozen” 15-pack in which its sold, also a Founders innovation.