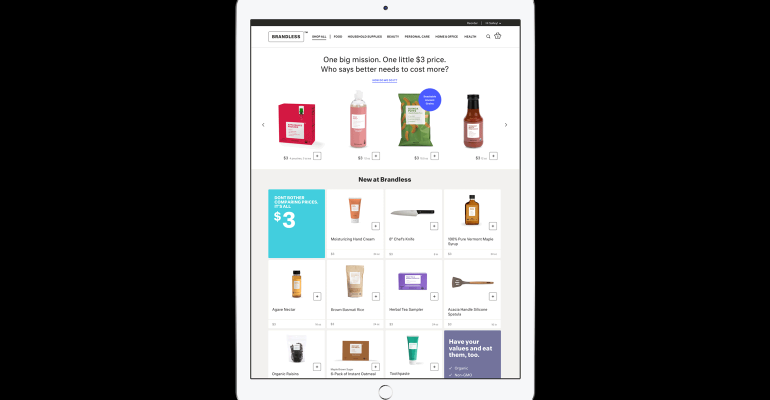 Brandless, a San Francisco-based e-tailer that’s something of a deft combination of Aldi, Dollar Tree, Whole Foods and Target, announced its official launch this week.

The concept offers a variety of what it calls “premium” shelf-stable food and household staples — all offered at a single $3 price point. All items at Brandless are private label, packaged to present a consistent range, and adhere to quality standards — including a selection of non-GMO, organic, fair trade, kosher and gluten free foods.

Company officials were not immediately available for comment to SN but in a press kit announcing its launch, the company said Brandless “is reframing the outdated CPG market and starting a movement that ushers in a new wave of consumer-activist culture and transparency: better-for-you products at the fairest price from a group of people that do good by doing well.” Beyond participating in the broad move to online fulfillment for staple goods, Brandless would appear to be positioning itself at the intersection of multiple consumer trends further disrupting traditional retail including private label, convenience, simplicity, wellness, indulgence and value. It described its “core mission” as defeating what it called the “brand tax” — or hidden costs associated with branded goods. The company has trademarked the “brand tax” expression, estimating that average person pays about 40% more for branded goods of comparable quality — and up to 370% more for items like face cream.

Brandless said it benchmarked pricing across five major online and physical retailers, and calculated a “brand tax” savings that it will communicate to shoppers on their personal account pages.

Its reliance on a single price point can allow it to manage margin in a manner not unlike Dollar Tree, and like that retailer, will adjust package sizes offered on the site: Organic fair trade cold brew coffee for example, comes in a 3-ounce bag; maple syrup in a petite, 6.7-ounce bottle. Less expensive items like 9-ounce bags of organic tortilla chips are sold two for $3.

Brandless said it was offering more than 200 different items at launch — a tight selection, even compared to “limited assortment” physical retailers like Aldi.

Shoppers at Brandless who opt to pay a $36 annual membership fee in the “B.More” loyalty program will receive free shipping on all orders of more than $48, along with other benefits like early access to new product launches.