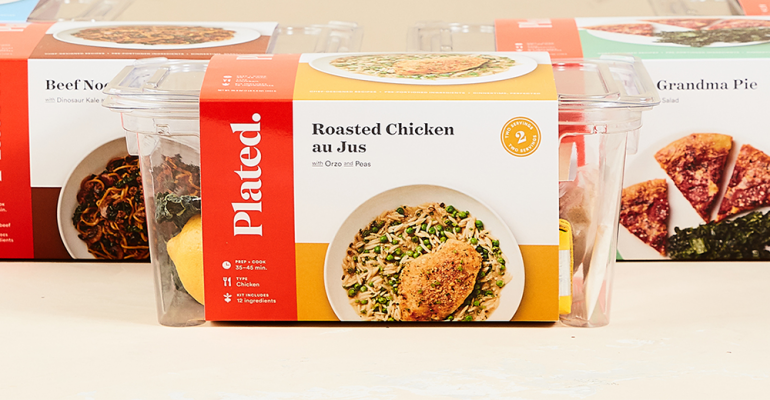 Meal kit provider Plated, part of Albertsons Cos., is shrinking its retail distribution as the company reassesses its in-store market strategy.

A Plated spokeswoman confirmed Friday that the New York-based company’s meal kits are no longer sold at stores in the Boise, Idaho, area, where Albertsons is based.

Albertsons announced the national rollout of Plated meal kits to its stores last April, at which time the supermarket retailer had the kits in 20 Safeway stores in Northern California and 20 Jewel-Osco stores in the Chicago area. The company said Plated kits would be available in select Albertsons, Safeway, Vons, Jewel-Osco, Shaw’s, Acme, Tom Thumb, Randalls, United Supermarkets, Pavilions, Star Market and Haggen stores by the year’s end.

As of late January, Plated meal kits were sold at more than 300 Albertsons Cos. stores, and the retailer has five Plated fulfillment centers. Plated's online subscription service is across all continental U.S. states. Albertsons acquired Plated in September 2017.

“Plated has enjoyed the ability to test and learn on a large scale because of Albertsons Cos.’ expansive footprint that covers a wide range of markets and store brands. As a result of our testing, we'll continue to offer Plated in select stores while we temporarily reduce the overall scope of Plated's retail distribution as we evolve its in-store presence,” the Plated spokeswoman said in a statement.

“This shift will allow us to focus on innovation for the future expansion of Plated within the Albertsons Companies ecosystem,” she explained. “We remain committed to growing Plated to serve customers in new and exciting ways.”

Albertsons said in January that Plated co-founder and CEO Josh Hix had left and that another chief executive wouldn’t be appointed. Nick Taranto, who co-founded Plated in 2012 with Hix, left the company in October. Pat Brown, group vice president of strategic business initiatives at Albertsons Cos., was named to oversee the Plated business, which will continue to operate under its brand within the Albertsons Cos. organization.

According to market researcher Nielsen, sales of in-store meal kits totaled $93 million for the 52 weeks ended Dec. 29, 2018. At the same time, in-store meal kit users jumped by 2.2. million households in less than a year, accounting for 60% of growth in meal kit customers.