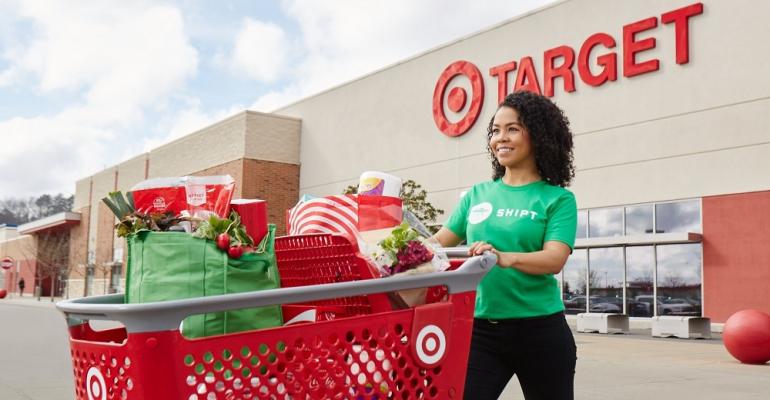 Shipt online grocery delivery is coming to the Big Apple and the surrounding area.

The online delivery marketplace said it plans to begin same-day delivery in all New York City boroughs — the Bronx, Brooklyn, Manhattan, Queens and Staten Island — from Morton Williams Supermarket and Target stores on August 9. Shipt members will be able to shop fresh foods and household essentials from both retailers as well as home goods, electronics, toys and other products from Target.

That launch is part of Shipt’s rollout in metropolitan New York starting later this month and in August. The additional areas include the Hudson Valley, Kingston, Long Island, Mount Kisco and White Plains, N.Y.

Calling the move a “landmark expansion,” Shipt said more than 3.4 million households across metro New York will get access to its service, with groceries and other items delivered in as soon as an hour.

“We’re making shopping for daily essentials easier than ever before. Busy urban residents are able to access the familiar aisles of their local stores seamlessly, bringing everything from dinner ingredients to household items right to their doorstep,” Shipt founder and CEO Bill Smith said in a statement. “This launch is a symbol of Shipt’s rapid growth as we continue our expansion to bring Shipt to households across the country.”

In the surrounding New York City areas, Shipt said delivery from Target stores is slated to begin on July 31 for the Hudson Valley and Kingston, on Aug. 7 for Long Island, and on Aug. 14 for Mount Kisco and White Plains, reaching over 1.3 million households.

Also during the same time frame, Shipt plans to make its debut in New Jersey with same-day delivery from Target and Morton Williams stores in 12 metro areas.

Shipt delivery from Target stores is due to begin on July 26 in Atlantic City, East Brunswick, Mercer County, Monmouth County, Tom's River and Vineland and on Aug. 2 in Hackettstown, Morristown and North Jersey. The service is slated to launch from Morton Williams supermarkets on Aug. 9 in Edison, Jersey City and Newark.

The rollout will provide more than 2.6 million households in New Jersey access to the Shipt service. With the expansion, Shipt said it aims to add more than 400 personal shoppers in the state.

In all of the new market areas, Shipt is offering $50 off the regular $99 annual membership to consumers who sign up for the service before its launch date in their area. Annual Shipt membership provides free, unlimited delivery on orders of more than $35.

The launch with Gordon Food Service extends Shipt’s reach to 1.1 million-plus households in Daytona Beach and Orlando, Fla.; St. Louis; and Knoxville, Tenn. New Shipt members in these areas are being offered a free two-week free trial and a $15 credit off their first order.

“The addition of Gordon Food Service Store in these cities brings an option for cost-efficient and large-format grocery orders to our Shipt members,” Smith stated.

And last week, Birmingham, Ala.-based Shipt, a subsidiary of Target Corp., introduced same-day online grocery delivery from Smith’s Markets in the Ogden, Provo and Salt Lake City, Utah. Shipt first entered Utah in May, and the company said this latest launch expands its service to more than 700,000 households.