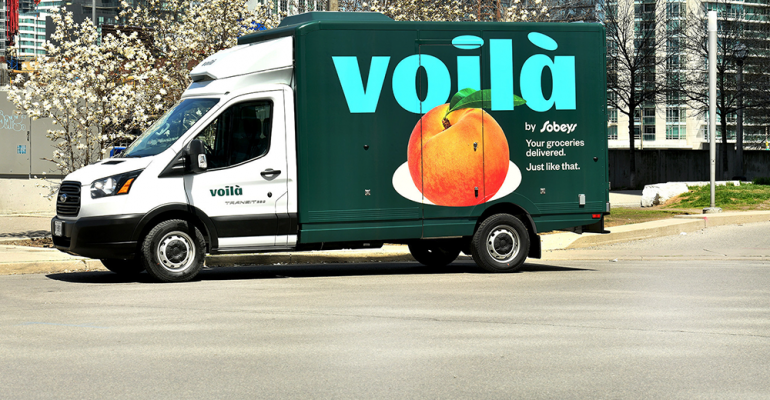 Parent Empire Company Ltd. said Thursday that the retailer’s initial home delivery offering, Voilà by Sobeys, is slated to get under way in the greater Toronto area in spring 2020 when its previously announced customer fulfillment center (CFC) in Vaughan, Ontario, begins operation.

Due to launch in 2021 is Voilà par IGA, an online grocery delivery service in Ottawa and major cities in Quebec that will be served by a second CFC to be built in Pointe-Claire, Montreal. The Sobeys and IGA Voilà services and the Vaughan and Montreal CFCs will be powered by Ocado’s Smart online grocery platform.

The Voilà service will offer a selection of up to 39,000 products, including fresh produce, at prices comparable to those at Sobeys and IGA stores, Stellarton, Nova Scotia-based Empire said. The online grocery brand will carry the tagline "Your groceries delivered. Just like that."

"We are building the most advanced e-commerce infrastructure in Canada,” Sarah Joyce, senior vice president of e-commerce for Empire, said in a statement. "An online grocery home delivery experience like Voilà by Sobeys does not yet exist in Canada. While most players in the industry are focused on store pick models to fulfill their online orders, we are building automated warehouses specifically designed for best-in-class home delivery based on a highly successful model from the U.K. Voilà by Sobeys will deliver Canadians exactly what they want, when they want it, every time."

"We're thrilled to build on our solid legacy of e-commerce in Quebec," Joyce added. "When selecting future locations, we consider size of market, population density and potential for growth. Launching in Quebec is another exciting step forward to bringing the world's most innovative e-commerce solution to Canadians."

Construction of the Vaughan CFC is on schedule and will cost an estimated $95 million, Empire reported. The company said it expects the Montreal CFC’s construction cost to be about the same or possibly less than Vaughan’s, since the latter facility enables efficiencies in Montreal. Empire plans to partner with its Crombie REIT subsidiary to develop the Montreal CFC and then lease the facility from Crombie.

Empire added that most of the Montreal investment will be incurred by Crombie, while software, licensing and systems integration costs incurred in fiscal 2019 will apply to both CFCs. The company said its e-commerce expansion will create about 1,500 jobs in the greater Toronto and Montreal areas.