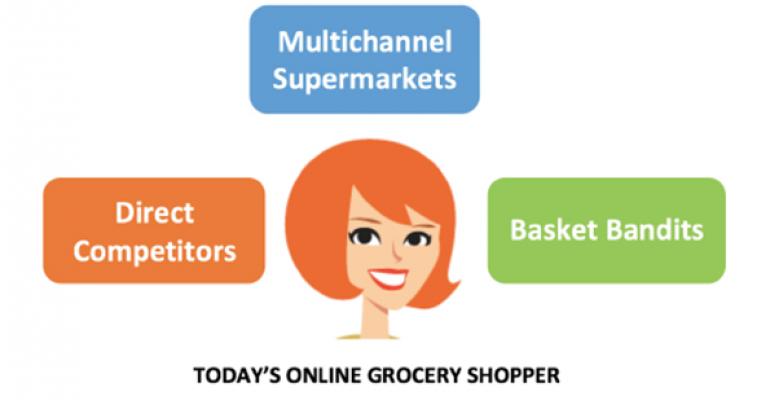 &ldquo;Consumers have been spreading their online grocery shopping across more sites, and the increased availability of options is dramatically accelerating this trend.&rdquo; &nbsp;&mdash; Bill Bishop, Brick Meets Click &nbsp; 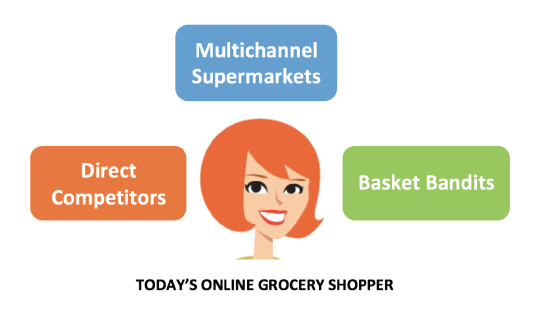 The largest online threat to supermarkets is not coming from direct competitors like Peapod or FreshDirect, but from "basket bandits" like Amazon that capture some but not all of a supermarket's business, creating an ongoing stream of sales leakage, according to a report to be released Tuesday from Brick Meets Click.

“Consumers have been spreading their online grocery shopping across more sites, and the increased availability of options is dramatically accelerating this trend,” said Bill Bishop, chief architect of Brick Meets Click and primary author of the report, entitled "The Supermarket Guide to Online Grocery Competition."

According to the report, "basket bandits" include Amazon and a host of other online-only retailers such as Blue Apron, ThriveMarket.com, Drugstore.com, Chewy.com, and the online stores of mass and club retailers. Although indirect competitors to supermarkets, these retailers capture 84% of online grocery trips and take in 59% of all online grocery spending, the report said.

By contrast, multichannel supermarkets — those with physical stores and an online presence — capture around 10% of online grocery trips, while direct competitors such as Peapod and FreshDirect with the potential of capturing all of a supermarket business — account for around 6% of online trips.

Even with AmazonFresh in limited rollout, Amazon captures nearly half of all online grocery trips (48%), compared to 15% for mass and club retailer sites and 21% for non-Amazon sites.

Since 2013, the percentage of shoppers that have bought groceries from Amazon in the past 30 days has increased 25%.

“We also found an Amazon multiplier effect,” Bishop noted. “As online grocery trips per month increase, so does Amazon’s share of trips. They are continually working on making buying easier, and supermarkets need to respond."

"This important research confirms that not only is the advent of digital grocery influencing consumer behavior in ways that impact share of wallet, but also suggests that brick and mortar grocers can still maintain the upper hand when capable of embracing a sound, multi-channel strategy," Eric Healy, president of MyWebGrocer, which supported the publication of the report, said.

By comparing shopper satisfaction scores, the report also identifies where multichannel supermarkets are currently vulnerable, and it points to three important areas where supermarkets have an opportunity to improve:

• The ease of reviewing product information.

• The experience of receiving all the items ordered.

• The consistent notification of substitutions.

Multichannel supermarket retailers outperformed Amazon in only one area of the online experience, the reported said — adding coupon discounts.

"Current trends indicate that more households are making the shift [to online shopping] every day — to get specific items they can’t get in-store, to buy at lower prices, or to take advantage of conveniences like subscription buying and delivery for immediate consumption," the report added.