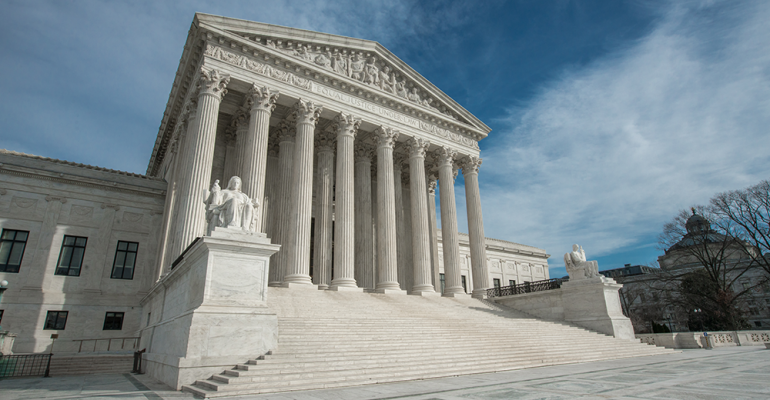 In a much-anticipated decision, the U.S. Supreme Court ruled today that Internet retailers must collect sales taxes in states where they have no physical presence.

Brick-and-mortar stores had complained for years that the physical presence requirement gave out-of-state sellers an unfair edge, since consumers would likely steer their purchases to retailers that didn’t charge them sales tax. At the same time, states — especially those grappling with fiscal pressures — became indignant over lost tax revenue. The complaints amplified as Internet retail sales surged during the past two decades.

In its decision on the Wayfair case, the Supreme Court said it was clear that the growth of the Internet has changed the retail market to the extent that the physical presence standard no longer applies, resulting in an unjust competitive advantage to remote sellers and impeding states’ rights to garner sales taxes. “The Quill court did not have before it the present realities of the interstate marketplace, where the Internet’s prevalence and power have changed the dynamics of the national economy,” Justice Anthony Kennedy (left) wrote in the majority opinion, in which he was joined by Justices Clarence Thomas, Ruth Bader Ginsburg, Samuel Alito and Neil Gorsuch. “The expansion of e-commerce has also increased the revenue shortfall faced by states seeking to collect their sales and use taxes, leading the South Dakota legislature to declare an emergency. The argument, moreover, that the physical presence rule is clear and easy to apply is unsound, as attempts to apply the physical presence rule to online retail sales have proved unworkable.”

Chief Justice John Roberts led the dissenting opinion, in which he and Justices Stephen Breyer, Sonia Sotomayor and Elena Kagan argued that Congress, not the court, should decide the online sales tax issue.

“E-commerce has grown into a significant and vibrant part of our national economy against the backdrop of established rules, including the physical presence rule. Any alteration to those rules with the potential to disrupt the development of such a critical segment of the economy should be undertaken by Congress. The court should not act on this important question of current economic policy, solely to expiate a mistake it made over 50 years ago,” Roberts wrote, referring to the National Bellas Hess Inc. v. Department of Revenue of Illinois case, which initiated the physical presence guideline.

“Nothing in today’s decision precludes Congress from continuing to seek a legislative solution. But by suddenly changing the ground rules, the court may have waylaid Congress’s consideration of the issue,” he added. “Armed with today’s decision, state officials can be expected to redirect their attention from working with Congress on a national solution to securing new tax revenue from remote retailers.”

The June 21 ruling by the Supreme Court, which began arguments for the case in April, upheld a 2016 South Dakota law that required online merchants with over $100,000 in annual sales to state residents or 200 transactions with state residents to collect sales tax.

“Retailers have been waiting for this day for more than two decades. The retail industry is changing, and the Supreme Court has acted correctly in recognizing that it’s time for outdated sales tax policies to change as well,” National Retail Federation President and CEO Matthew Shay said in a statement. “This ruling clears the way for a fair and level playing field where all retailers compete under the same sales tax rules, whether they sell merchandise online, in-store or both.”

The precedent set by Quill was outdated, made “in the days when the Internet was in its infancy,” the Food Marketing Institute (FMI) said in a statement Thursday.

“Quill established two different sets of rules governing the collection of sales taxes that left traditional retailers badly disadvantaged against their online peers. Today’s ruling sets the stage for states to begin leveling the playing field for brick-and-mortar retailers by treating online transactions in the same way they treat in-person ones,” commented Andrew Harig, senior director of tax, trade and sustainability at FMI. “The Supreme Court’s decision is an important victory for FMI members and puts us on a path that will allow for the creation of a balanced, consumer-driven and competitive marketplace.”

Requiring a merchant to have a physical location to be subject to sales tax collection “produces an incentive to avoid physical presence in multiple states,” Justice Kennedy explained in the majority opinion.

“Distortions caused by the desire of businesses to avoid tax collection mean that the market may currently lack storefronts, distribution points and employment centers that otherwise would be efficient or desirable,” he said. “Rejecting the physical presence rule is necessary to ensure that artificial competitive advantages are not created by this court’s precedents. This court should not prevent states from collecting lawful taxes through a physical presence rule that can be satisfied only if there is an employee or a building in the state.”

The 45 states with a sales tax are expected to work on legislative and regulatory remedies to close the online tax loophole in their states, according to Deborah White, general counsel for the Retail Industry Leaders Association (RILA) and president of the Retail Litigation Center.

“Today’s decision culminates years of tireless work by the retail community to reverse a pre-Internet-era rule that distorts free markets and puts local brick-and-mortar stores at a competitive disadvantage with their online-only counterparts. This was the right case and the right time for the court to act, and we couldn’t be more pleased with the outcome,” White stated.

“For the consumer, this means an increasing array of options both in-store and online, with competition for their business based on price, service, selection and value — not special tax treatment,” she added.

FMI’s Harig said, “We look forward to working with the states and Congress as they seek to outline the terms under which states can collect these taxes.”

E-tail giant Amazon had been a focal point of complaints over Internet sales taxes until, in recent years, it instituted tax collection for all states charging sales tax. However, sales tax isn’t collected by much of its Amazon Marketplace merchant base, which has been a growth avenue for online startups and entrepreneurs.

Small businesses and Internet startups are likely to be most impacted by the Wayfair decision, as the calculation and remittance of sales taxes on all e-commerce sales “will likely prove baffling for many retailers,” Kennedy said in the dissenting opinion.

“The burden will fall disproportionately on small businesses. One vitalizing effect of the Internet has been connecting small, even ‘micro’ businesses to potential buyers across the nation,” he wrote, adding, “The court’s decision today will surely have the effect of dampening opportunities for commerce in a broad range of new markets.”

A resolution of the “antiquated sales tax rules” was overdue given their impact on competition in the rapidly changing retail landscape, according to Laura Strange, vice president of industry relations, communications and marketing at the National Grocers Association.
“Today’s decision is welcomed by Main Street grocers, as it helps assure a more level playing field between Main Street brick-and-mortar and out-of-state e-commerce merchants,” Strange said.