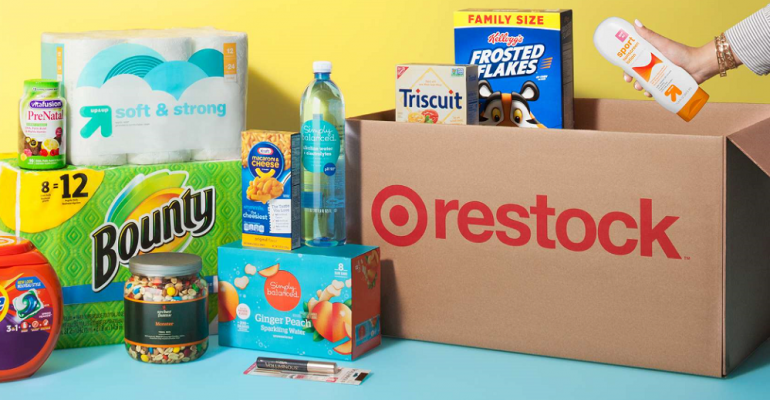 After pilots in major markets since last summer, Target Corp. has rolled out its Target Restock next-day delivery service nationwide.

Target said Tuesday that, with the expansion of the online stock-up service, more than 75% of the U.S. population can order from an assortment of 35,000 items — including food, home essentials and other consumer staples — and have their “Restock box” delivered to their door the next day.

In addition, Target has cut the Restock fee to $2.99 from $4.99 and made the service free to Target REDcard holders. There’s no membership fee.

“Target Restock is another way we’re making life easier for our busy, budget-conscious guests. Our guests love the speed and convenience of the service,” Dawn Block, senior vice president of digital at Minneapolis-based Target, said in a statement. “And now that Target Restock is an even better value, we think the service will become increasingly popular.”

Restock currently is offered in 11 markets and is slated to reach about 60 metropolitan areas this week. Products available for delivery run from national- and own-brand consumables and baby products to personal care and cleaning supplies.

Customers using Restock via Target’s website or app add items to their box — limited to 45 pounds, or roughly the volume of a shopping cart — and use the capacity tracker to see the “space” left in their box. They can order online as late as 7 p.m. and have their boxes delivered the following day. Target said it’s able to provide next-day delivery by fulfilling the Restock orders from the shelves of nearby stores.

Target added that it also recently launched voice-activated ordering for Target Restock. Users can now order Restock items via Google Home or a smartphone with the Google Assistant app.

The Restock program builds on Target’s online grocery delivery via Shipt, acquired in December, and ups the e-commerce ante with rivals Amazon and Walmart. Amazon offers the Prime Pantry stock-up program, for which the e-tailer recently hiked the fee, while Walmart has embraced a strategy to use its stores as fulfillment points for online orders, as Target is doing with Restock.

Restock launched last June as a test in the Minneapolis area. REDcard holders could order from about 10,000 items and get next-day delivery for $4.99. In August, the pilot kicked off in the Dallas-Fort Worth and Denver markets and was expanded to include all Target customers and 15,000 items.