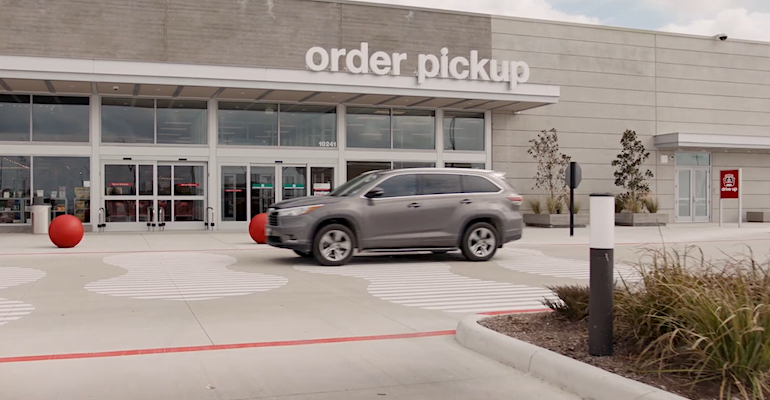 October online grocery sales totaled $7.8 billion, declining 3.7% from $8.1 billion a year ago but flat versus the $7.8 billion tally in September, which marked a 2.5% year-over-year decrease. Both market totals were down from $8.5 billion in August, when sales dipped around 1%.

The effects of persistent price inflation were evident in total grocery spending as the average dollars spent on groceries per household during the last week of October increased 15% versus last year, Barrington, Ill.-based strategic advisory firm Brick Meets Click noted. During that period, online’s share of spending dipped around 50 basis points, accounting for 11.6% of total grocery sales in October of this year. Excluding the ship-to-home segment (since it’s not offered by most conventional supermarkets), pickup and delivery’s combined contribution was 9.4% during the same period.

Though October's year-over-year decline was similar to the previous month, October's results were driven by different factors — including changes in spending per order, order frequency, and monthly active users (MAUs) — that weren’t evenly distributed across the retail channels like mass and grocery, according to Brick Meets Click, which focuses on how digital technology impacts food sales and marketing.

During October, and unlike in September, all three segments — pickup, delivery and ship-to-home — saw slowdowns in spending per transaction, down 5% in the aggregate versus the same period last year. Ship-to-home’s average order value (AOV) contracted the most, dropping nearly 11% versus a year ago. Delivery’s AOV slipped more than 7%, and pickup’s dipped just over 3% during the comparable periods. 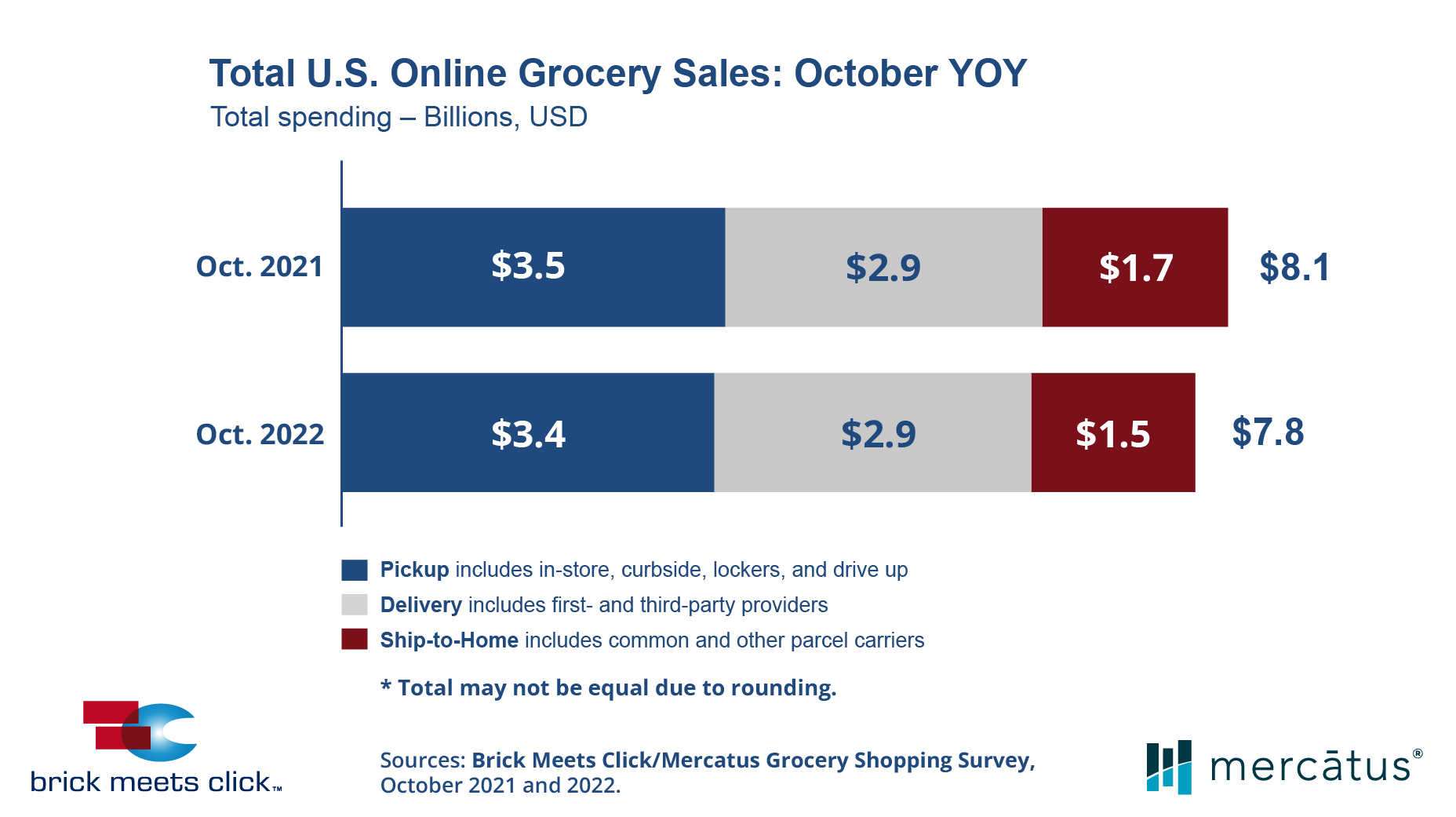 Brick Meets Click said the broad-based downturn in online grocery spending indicates that customers may be shifting some purchases offline and/or buying fewer items in general because of a challenging economic outlook plus persistent price inflation.

Order frequency (number of orders received by MAUs) was another area where October trends differed from those in September, the survey revealed. The composite order frequency for October fell nearly 7%, as all three segments tailed off versus last year. Ship-to-home MAUs declined the most, receiving 12% fewer orders in October compared with last year. Pickup decreased 7%, and delivery was essentially flat, declining less than 0.5%. The softening of this metric indicates a subtle shift in how customers get groceries, with offline purchases gaining from more in-store trips, Brick Meets Click observed.

Meanwhile, the overall e-grocery MAU base — spanning click-and-collect, delivery and ship-to-home — expanded by 10% year over year in October but shrank slightly from September. Each segment experienced growth in its respective MAU base, driven by a 10% gain for delivery, an almost 8% lift for pickup, and a nearly 6% bump for ship-to-home.

While the difference between the MAU base for October and September may reflect the impact of less-frequent customers who cycle in and out of online grocery shopping, the positive trends across the board spotlight a larger customer base that retailers can cultivate to unlock additional, latent demand, Brick Meets Click said.

“Beneath the top-line results, the monthly active user base grew much faster for mass than for grocery versus last year, which may be driven to some degree by inflation’s impact on household spending, but it also reflects the ability of mass to provide a better shopping experience,” explained David Bishop, partner at Brick Meets Click. “Improving the shopping experience is vital for conventional supermarkets’ long-term success, as the appeal of shopping online has more to do with convenience than cost.”

In October, the cross-shopping rate between grocery and mass — i.e. the share of grocery MAUs who also shopped online for groceries with mass — held steady versus September at nearly 28% yet edged up two percentage points year over year. Although about two-thirds of this group also shopped with Walmart during 2021 and 2022, the share that shopped with Target has grown, climbing from about one-third of the group last year to nearly one-half this year.

For conventional supermarkets, this shopping metric indicates that a sizable portion of their MAU base is likely forming their shopping expectations based on experiences with big-box rivals, Brick Meets Click pointed out.

Repeat intent, or the likelihood of an online grocery shopper to use the same service again within the next 30 days, softened in October month to month but improved versus a year ago. For October, the repeat intent rate came in at just over 58%, a 110-basis-point gain from a year earlier but a 230-basis-point decline versus the previous month.

More importantly, the survey showed, the gap between the respective intent rates for grocery and mass has widened significantly, as grocery now trails mass by more than 7 points versus just two points a year ago. Brick Meets Click said the gap highlights the different experiences that customers are encountering when shopping grocery and mass, which could impact future usage decisions.

“As grocery retailers look to strengthen their share of monthly active online grocery shoppers, they should focus on working smarter, not harder,” stated Sylvain Perrier, president and CEO of Toronto-based Mercatus. “This means making sure that your assortment is accurately reflected online, the online ordering process is engaging and streamlined, and there are no unfortunate surprises for customers during the order assembly and receiving process.”