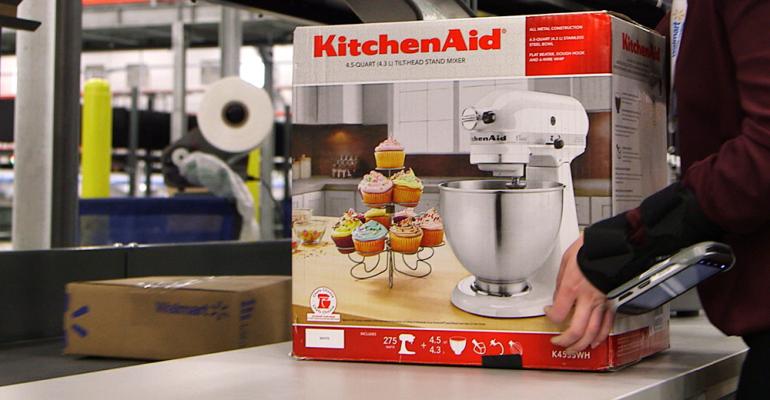 Walmart has asked its vendors to supply it with more grocery and general merchandise items with a price tag of at least $10 in an effort to make its online merchandising efforts more profitable and better compete against Amazon.com, according to a report.

Meetings were held with key vendors including Procter & Gamble, Clorox, Unilever and Kimberly-Clark, where Marc Lore, president and CEO of Walmart eCommerce US and co-founder of its Jet.com subsidiary, explained that Walmart.com wants to focus on merchandise priced at least $5, and preferably more than $10, the report said, citing people who attended the meetings. Walmart is theorizing that it will see higher profit margins concentrating on more expensive goods, since delivery costs are the same whether an item costs $10 or $1.97.

Sauces, soaps, toys, home furnishings and items like razors are among the types of products that Walmart is asking its vendors to offer it higher priced versions.

The effort marks a shift in Walmart’s strategy. The Bentonville, Ark.-based retailer has historically pushed suppliers for the lowest possible prices so it could “sell for less” and pass those savings on to its shoppers, both online and in its physical stores. While it will continue to do that for its brick-and-mortar stores, it wants suppliers to provide it with higher ticket items to sell online.

As a result, some food and household goods suppliers will have to step up their research and development to create new premium, higher priced items to sell on Walmart.com. One of the chain’s vendors noted that more than 95% of its items sold on the store’s website are priced lower than $8.

“This tells me that the costs of an online capability are extremely burdensome for retailers who are principally bricks-and-mortar,” said Dr. David Rogers, president of DSR Marketing Systems Inc., a consulting firm based in Northbrook, Ill. “The idea of having to charge people more online than you do in the store, which is basically Walmart’s philosophy, is going to cause them problems down the road. It is very strange and ultimately they are going to have to change that.”

Walmart already charges higher prices for many items online, like a jar of Hellmann’s mayonnaise, for example, compared to what it is charging in its stores, Rogers noted.

“That is basically saying to the shopper that if you put out the effort to come to the store, we’ll give it to you for less,” he said.

According to Rogers, Walmart’s actions speak to the fact that the retail industry as a whole is squandering large amounts of money on online retailing. “Some of the most successful retailers have a minor presence online,” he said, citing T.J.Maxx, operator or Marshalls, Home Goods and other stores as one example. “Lidl is cutting back on online activities. For retailers, it raises a big question about whether you choose to compete with Amazon.”

By peddling higher ticket consumables online, Walmart may also be courting a higher income shopper who prefers shopping at Target or mall stores like Bath & Body Works over the world’s largest discounter.

“That is why Walmart is closing some of their Sam’s Club membership stores and repositioning Sam’s Club for a so-called more affluent shopper. They want to be more like Costco, but imitating Costco is not a route to success. They need to be different,” Rogers said. “Some of these strategies and tactics are looking a little bit doomed to failure, in my opinion.”

According to people who attended the suppliers’ meetings, Walmart wants to avoid selling products online at a loss, as Amazon sometimes does. Amazon sometimes sells popular items at cost or at a loss in the belief that it will build customers’ long-term loyalty. However, Amazon can offset those losses through other sources of income, including third-party sales commissions and advertising sales on its sites.

“We’re going through a very volatile immature phase in the combat between online and bricks-and-mortar,” Rogers says. “There is going to be an awful lot of settling down, and some of that is going to be very ugly in terms of wasted expenditures.”

Walmart did not respond to requests for comment by deadline.