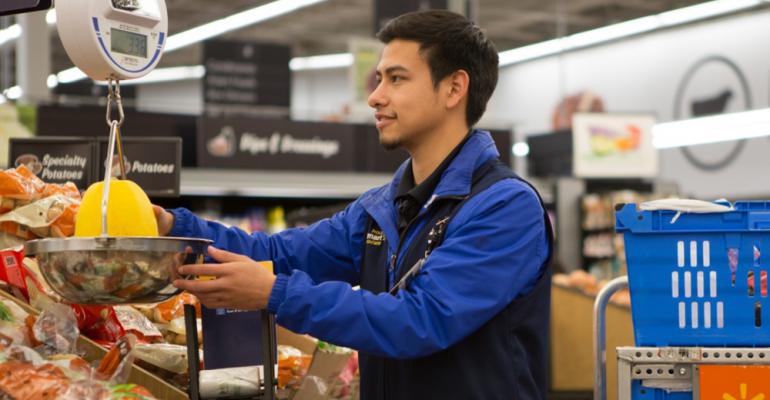 Turning up the competitive heat, Walmart is looking to bring its online grocery delivery service to more than 40% of U.S. households through a partnership with the Postmates delivery network.

The Postmates-powered service kicked off on Tuesday in Charlotte, N.C. Walmart said it plans to expand the service to more markets over the coming months.

To use the grocery delivery service, customers in Charlotte place orders online at Walmart.com/grocery or via the Walmart Grocery App, switch to the “Delivery” tab and choose a delivery window at checkout. Walmart personal shoppers pick up the orders, and then Postmates fleet members retrieve the orders from Walmart stores and deliver the purchases directly to customers during their designated delivery window.

Shoppers can order fresh produce, meat, seafood and bakery items, as well as pantry staples, consumables and seasonal general merchandise, through the Walmart Grocery Delivery service. The company said personal shoppers must complete a three-week training program to learn how to select the freshest produce and the best cuts of meat for online grocery customers.

“Customers are busy. They are managing jobs, soccer practice, dance lessons and social schedules. So we are on a mission to do more than keep a little extra money in their pockets,” Mark Ibbotson, executive vice president of central operations for Walmart U.S., said in a statement. “With the help of Postmates, we’re making grocery shopping even easier by bringing the everyday low prices of Walmart right to the front door of customers in Charlotte, with more areas to be added soon.”

Groceries can be delivered as soon as the same day, according to Walmart. The service costs $9.95 for a $30 minimum order. The company noted that its online grocery delivery doesn’t require a subscription or have price markups, and customers can get free delivery for their first order (minimum $50) with the promo code “FRESHCAR”.

“Both Walmart and Postmates strive to make the lives of our customers easier. With our growing fleet of 160,000 couriers, we are confident that we’ll be providing Walmart customers with the ultimate convenience,” said Dan Mosher, senior vice president and merchant lead at San Francisco-based Postmates. The on-demand delivery company said it has the nation’s largest fleet of couriers and operates in more than 50 U.S. metropolitan markets.

Walmart added that it also offers an online grocery pickup service, enabling customers to order groceries online and retrieve them at stores without having to leave their cars. The service is available in 1,200 stores, including almost 20 in Charlotte, and 1,000 stores are slated to begin offering it this year, the company said.

Food retailers of all stripes have been scrambling to provide online grocery ordering and delivery — and in faster turnaround times — to meet the needs of today’s on-the-go shoppers and reach lucrative bases of consumers, particularly Millennials, who are digitally savvy and prize convenience.

For example, on Tuesday, Whole Foods Market and Amazon expanded free, two-hour online grocery delivery through Amazon Prime Now to the Los Angeles market, the seventh city for the service.

And last week, Shipt launched same-day deliveries for Winn-Dixie supermarkets in 13 Florida markets and later this month plans to begin deliveries for Target stores in the Northwest. Target, which acquired Shipt in December, said most of its stores are expected to offer the service by the holiday season.