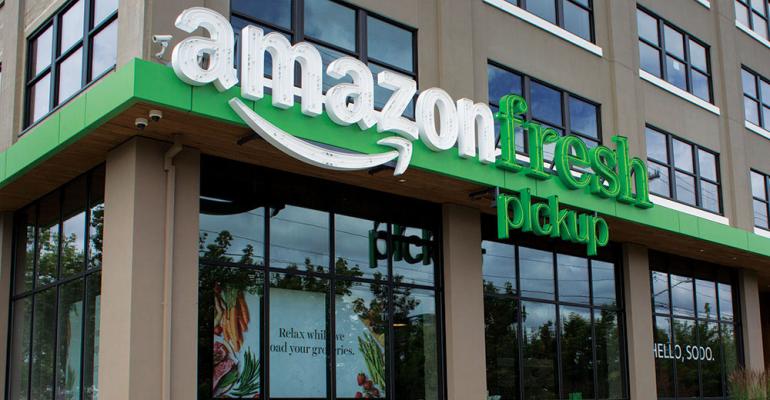 Whatever you’re doing in e-commerce, it’s not enough

It’s looking more and more that 2017 will be the year where the physical and virtual grocery shopping worlds got their peanut butter in one another’s chocolate.

Just this past week, officials of Wal-Mart Stores said they would have around 1,100 stores offering online grocery pickup this year, and were continuing with initiatives built around making fulfillment more versatile and/or efficient: For example, offering discounts on online orders picked up in stores, and testing the idea of having store employees deliver orders to customer’s homes on their post-work commutes.

Amazon, whose pending acquisition of Whole Foods has been seen as a means to gain credibility and a physical base from which to better penetrate the U.S. grocery market, also this week said it was rolling out “Instant Pickup,” a free service offering its Prime members a curated selection of “daily essentials” — in other words, a convenience food store — available for pickup in two minutes or less. The service is available at five campus locations currently with plans to add more locations soon.

We also heard the unexpected news that no-frills Aldi was getting into e-commerce for the first time through a partnership with Instacart in three cities. “Our partnership with Instacart is another example of Aldi expanding our commitment to customer convenience and value," Jason Hart, CEO of Aldi, said in a statement. "We know customers are looking for new ways to save time and money.”

Could Aldi’s prices disrupt the online ecosystem? Is their limited selection and subsequent small basket size adequate to make home delivery efficient? I guess we’ll wait and see. Not everyone is getting a big bang from Instacart. Natural Grocers CEO Kemper Isely candidly disclosed this month that its offering from the concierge service generates “a small amount — I mean a very, very small amount — of revenue, and it’s not growing by leaps and bounds.”

Isely’s remarks came in context of putting the online threat into perspective, noting that even its Colorado-area competitors like Kroger’s King Soopers and Walmart, which have been offering home delivery in the market for years, still see only a small bit of business through such efforts.

But the accumulation of varied small efforts may be where it’s at. Ahold Delhaize, which has been prepping for the merger of physical and virtual as long any food retailer, is learning as much. CEO Dick Boer earlier this month said that its Stop & Shop and Giant Food stores, which have been associated with digital shopping through the Peapod home delivery service for more than 15 years, and is now offering Instacart in some of their markets, are also now going to pursue a click-and-collect model, based on the success of their new sister chain Hannaford.

“I think in the long run, for online propositions, you need to have all three,” Boer said in an earnings conference call. “You need to have a pickup solution from your stores. You have to have the home delivery in … large urban territories. And last but not least, there will be solutions for one- or two-hour delivery slots with limited assortment. That's what we're leaning now.”

I don’t know if a community with an average household income of $135,000 actually qualifies as a food desert, but if there are any retailers out there with the desire to feed the needy, please report to Poolesville, Md., at once. Poolesville, an exurban bedroom community of Washington, D.C., may be wealthy but it’s food-poor, having lost its only grocery store, the family-owned Selby’s Market, in 2012, according to a release from the city. Google maps indicates the nearest grocery store to the city is a Harris Teeter in Germantown approximately eight miles away, but a release says the travel distance is almost a half-hour.

With eyes on attracting a grocer, the town has overhauled its commercial zoning laws, streamlined its permitting process, reduced regulatory barriers, and lowered commercial costs and red tape. Zoning permits that can be more than $440 in areas closer to D.C. are just $25 in Poolesville.

With a population of less than 5,000, Poolesville lacks the population density that big grocers desire so the town is taking steps to attract an independent grocer. It has commissioned studies, met with representatives of a national grocery association, performed demographic surveys, and is working with a special marketing firm to attract interest.

“Finding a store that is the right fit for our community is a challenge, but just as we have with other challenges, we’re more determined than ever to overcome this one,” Jim Brown, president of the Poolesville Town Commission, said in a statement. “We have all the essential business requirements and benefits that come with larger cities, and many other benefits that come with locating a business in a town that also serves as a hub for the up-county region.”