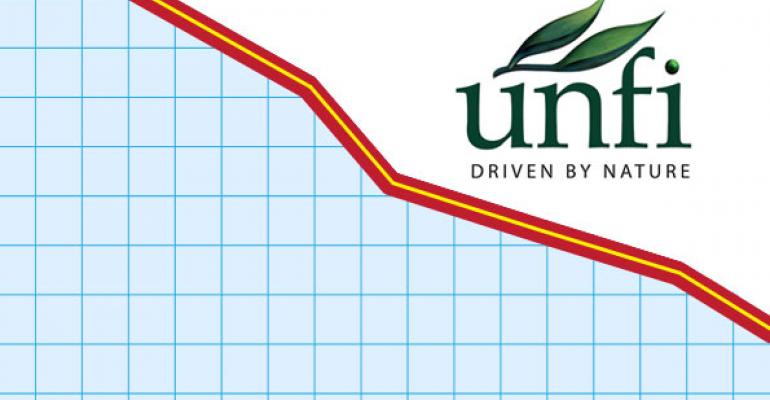 United Natural Foods stock fell by more than 16% Tuesday, a day after the company said that increased competition as a result of the mainstreaming of the natural and organic food trend portended a “transition year” for the distributor.

While UNFI officials framed the changing landscape as an opportunity for highlighting its unique capabilities, they also acknowledged that growing the business will likely require mergers, acquisitions and customer wins that have yet to materialize. The Providence, R.I., wholesaler must also accelerate its ongoing transition to serving store perimeters with fresh offerings as that becomes a differentiator, CEO Steven Spinner told analysts in a conference call late Monday.

“Throughout the 1990s and up until 2014, our industry was a niche,” Spinner said. “And there is no doubt that today we are mainstream.”

He added: “We believe this trend is very good for UNFI. While there is a significant evolution taking place at the supply chain and retail level, we believe the overall demand for our products will trump the short-term dislocation of price, sales growth and customer mix.”

A combination of the latter concerns led to the disappointing quarterly financial results announced Monday, including sales and earnings that missed analyst estimates and a tempered financial outlook for the coming year. Costs associated with an early termination of a distribution contract with Albertsons Cos. contributed to the gloomy financials: As previously announced, Albertsons switched its Safeway contracts to UNFI competitor Kehe this fall.

Presumably referring to that loss, Spinner in prepared remarks said, “We believe that the short-term disruption based solely on price without any consideration for service, product on shelf, quality or infrastructure is not a sustainable practice for retailers,” while highlighting recent contract renewals representing $785 million in annual sales with companies including Kroger, National Cooperative Grocers, Ahold and Delhaize. UNFI also recently extended an agreement with Whole Foods Market.

The company, meanwhile, is on the hunt for acquisitions to bolster its growing fresh distribution business, Spinner said, eyeing “a ton” of specialty, ethnic and fresh competitors. UNFI completed a takeover of specialty fresh distributor Tony’s Fine Foods about 16 months ago, and “we feel like we're ready to do another one. We feel that valuations for us are still realistic. And so I'm extremely optimistic that we're going to make some good progress there,” Spinner said.

While analysts for the most part supported UNFI’s strategic direction, they were cautious amid the company’s tempered outlook and uncertainty about the timing of acquisitions.

According to Barclays Capital analyst Meredith Adler, UNFI “is moving in the right direction by trying to grow the fresh side of its business, but predicting how and when that will happen is difficult.”

Kelly Bania of BMO Capital Markets agreed, noting “we believe it will take time for UNFI move the needle in perimeter categories.”