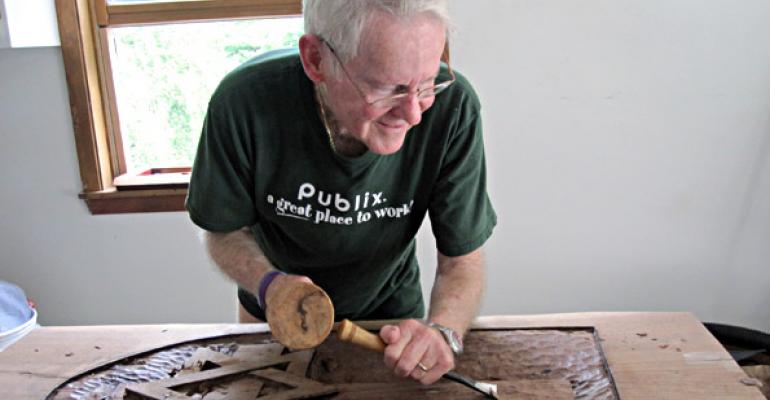 How Mark Hollis found an unexpected passion for sculpting

“What do I do with the rest of my life?”

It’s a question everyone approaching retirement asks themselves, and it’s one that Mark Hollis didn’t quite know the answer to. After serving as president of Publix Super Markets for 12 years, Hollis retired in 1996 and found the sudden change of pace unsettling.

“At first I thought I’d write some memoirs about my professional life,” he said. “But I got through about one half of one chapter and I thought, this is really hard work.”

Hollis wanted to stay active, but he didn’t want to jump back into food retailing. He shied away from consulting, a potentially lucrative second career that many of his peers opted to do. He played tennis and took up water aerobics with his wife.

He also thought about the question some more.

Then one day an acquaintance in the North Carolina mountain town where Hollis spends six months each year invited him over to his sculpting studio. This was Nelson Nichols, a renowned area sculptor. He gave Hollis a chisel and put him to work chipping and sanding. It was grunt work, but Hollis came back, and he kept coming back, week after week.

“After about a year [Nelson] said, ‘Here, take this piece of stone and go do something,’” said Hollis. 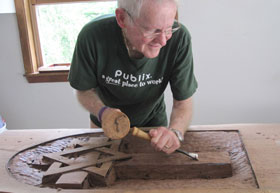 "Sometimes I get carried away and I'll disappear into the studio for eight to 10 hours," says Hollis, who was Publix president for 12 years.

And so he did. Twelve years later, Hollis has carved out a fulfilling new chapter of his life. He has his own tools now, and he works out of his studio that looks out over the Smokey Mountains. He estimates he sculpts four to five hours a day, five days a week, though that can always turn into more. Time, he said, tends to melt away while he’s working.

“Sometimes I get carried away and I’ll disappear into the studio for eight to 10 hours,” said Hollis. “My wife has to come and remind me what time it is.”

He’s completed several pieces since he began sculpting, donating nearly all of them to friends or institutions. A recent one he carved out of walnut titled “Shalom” went to his alma mater, Stetson University, where it hangs in the school’s chapel. Another, “Survivor,” was donated to Lakeland Regional Medical Center in Florida, where it was unveiled a year ago.

It’s the reactions people have to these pieces, Hollis said, that provide all the payment he needs. Patients at Lakeland Medical Center have told him they touch his sculpture when they walk past because they believe it gives them strength.

“Things like that mean as much to me as it meant to have customers tell me how much they loved Publix,” said Hollis.

And so Hollis will keep chipping away, shaping not just pieces of wood and stone but his life, as well. Sculpting, he said, has taught him to be patient — a virtue he admits he was not known to possess in earlier years. It’s also made him look at the world in a different way, to consider avenues of creativity he would have never thought possible.

“People think I’m crazy, but the stone speaks to you,” said Hollis. “It leads you on the way you should go as you work at it.”