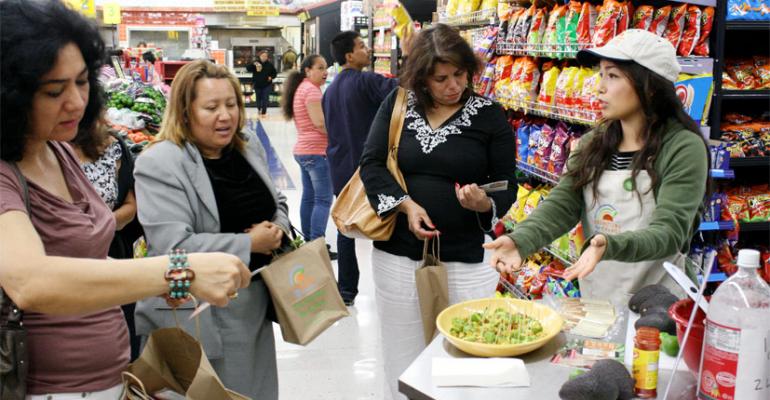 Two independent stores in San Diego were scheduled to host the pilot launch of the area’s Healthy Cocina Initiative over the Memorial Day weekend — offering freshly prepared chicken mole enchiladas with avocados at a low price and, alternatively, the fresh ingredients so customers can make the enchiladas on their own.

Cocina is the Spanish word for “kitchen.” The Healthy Cocina Initiative is a program — designed by the Center for Community Health at the University of California at San Diego — that focuses on making affordable prepared food accessible to low-income shoppers; it is also intended to have a positive impact on the local economy.

The two markets participating in the project will be Supermercado Murphy’s and Murphy’s Markets, both located in the City Heights section of San Diego, where they have operated as the only mid-size neighborhood supermarkets since an Albertsons closed early this year.

According to Chelsea Baron, senior manager of nutrition education and the obesity prevention branch for the Center for Community Health retail program, the center worked with residents, local high school students and Murphy’s employees to select recipes for the program. “They considered things like taste, cultural tendencies, whether they could make the recipes at home and whether their families would enjoy them,” she explained.

Besides the chicken mole enchiladas in May, future weekend offerings will include pozole with corn in June; chilaquiles with a fruit-salad side in July; and sopes with bell peppers in August. Each will be featured on Saturdays, Sundays and Mondays.

The first meal, priced at $3.97 for consumers and $2.97 for store employees, included the enchiladas entrée plus a choice of rice, pinto beans or pico de gallo fruit salad.

Shoppers also had the option of selecting the chicken and then going to a grab-and-go section in the stores’ produce departments to purchase each ingredient — including avocados, onions, garlic, oregano, canned chicken stock and sodium-free canned diced tomatoes — so they can make the meal at home.

The pilot program’s goal is to feature one healthy-focused recipe each month through August — available as a finished meal or as a series of ingredients for purchase, Baron said. “The hope is to develop a model for supermarkets countywide to offer a healthy recipe option to their shoppers,” she explained.

Text and captions by Elliot Zwiebach

Photos courtesy of the University of California at San Diego