/sites/all/themes/penton_subtheme_supermarketnews/images/logos/footer.png
Recent
Recent
Organic? We’ll see what the USDA has to say about that.
Jan 24, 2023
Retailers were eager to be back together at the 21st annual Friends dinner at FMI
Jan 24, 2023
Amazon launches RxPass
Jan 24, 2023
Opposition to Albertsons-Kroger merger continues
Jan 23, 2023
Boxed lands $20 million in funding
Jan 23, 2023
Featured
Podcast: Foodservice at retail ramps up
Jan 26, 2023
5 things: The rotisserie chicken wars
Jan 20, 2023
Kroger and Albertsons merger: What lies ahead?
Dec 13, 2022
Are we on the verge of a new grocery landscape?
Dec 06, 2022
PLMA
brought to you by 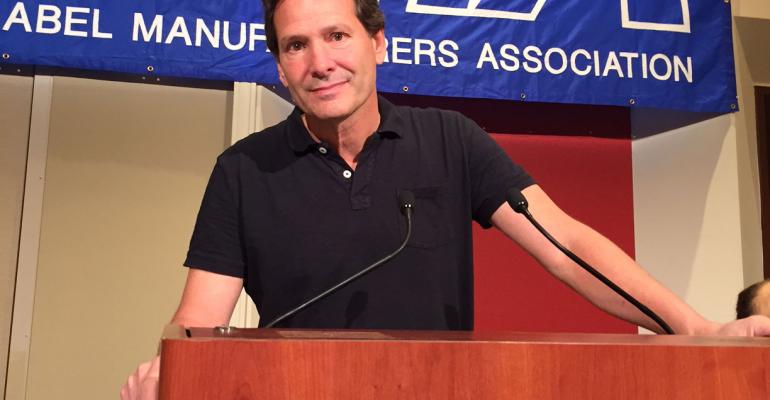 The quickening pace of technological change, in retailing and across the business world, puts a big burden on leaders to stay focused on where trends are headed, according to a presentation by Dan Schulman, president and CEO, PayPal.

Schulman, who spoke during the PLMA’s Private Label Trade Show in Chicago, said leaders tend to view developments through the rear-view mirror, a particularly dangerous move when it comes to the impact of technology.

“We look at what got us to the dance and extrapolate from what was, not from what could be,” he said. “It’s up to us as leaders to have the courage to think expansively. Where is the world going? How could we be disintermediated?”

Schulman warned PLMA attendees, “Digital is changing every industry, yours is not immune. It sucks up and spits out new models. Commerce will fundamentally change.”

He said mobile phones will continue to alter interactions between retailers and consumers, who now have the ability to buy products anywhere. One impact of mobile is that retailers can form more intimate relationships with their customers.

Schulman, whose past business roles included leadership stints at American Express, Sprint and Virgin Mobile, took the audience on a trip down the past hundred years of the business world. He emphasized how the pace of change has swallowed up the great majority of big companies. Among the factoids he offered:

• Most of the leading companies from the early years of the PC revolution are out of business.

Schulman said companies fail because they suffer from ‘situational bias,’ extrapolating only from what has come before. He said companies ranging from Smith Corona to Blockbuster were victims of this.

He pointed to how accurate Moore’s Law has been in predicting the surge in processing power and the decline in costs.