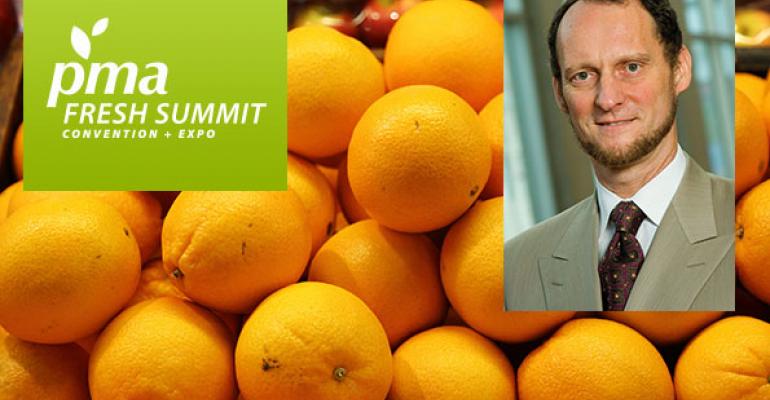 PMA 2015: Fresh Summit stays ahead of the trends

&quot;We&rsquo;re expecting well over 18,000 attendees [at Fresh Summit]. The show is sold out. We&rsquo;ve got one of the longest waiting lists we&rsquo;ve had in a long, long time, if not ever.&quot; &mdash;BRYAN SILBERMANN, PMA

Before the Produce Marketing Association brings Fresh Summit to Atlanta Oct. 23-25, SN spoke with PMA CEO Bryan Silbermann about an updated approach to the educational workshops and finding your “aha moment” at this year’s show. Excerpts from SN’s interview with Silbermann, edited for length and clarity, follow:

Certainly the education programming is taking a somewhat different tack. [For] the workshop series, we have a number of really smart people in the education department who are really making the sessions more interactive and reaching out to a broader range of speakers. I think you’re going to see people who typically haven’t kind of been on the programs before, in areas like science and technology, talent management, global trade. Really exciting lineup of the education program.

We’ve always done education programming, but I think the caliber of the speakers and the formats of some of the sessions are really going to be very, very interesting. So that’s something I would certainly flag.

We have something called Innovation @ Work, which is going to kind of pull together the Impact Award winners on the packaging side, [and] the Fresh Ideas Showcase. And part of that is something we’re calling On-The-Go [Showcase]. So that’s to showcase products that are convenience, snacking kinds of items.

I’m really excited about Guy Kawasaki, who is the Saturday morning general sessions speaker. Now, I heard him speak probably 25 years ago. And back then he was kind of the evangelist for marketing at Apple. He had marketed the original Macintosh. And I thought he was a fabulous speaker.

And when our team came and said, do we want to go after him for this year? I was just thrilled to hear he was still on the speaker circuit, because he talks about capturing bold ideas in practical ways. So it’s going to be fun for me to see how he’s matured in the last three decades.

And Cathy Burns and I have what I think is going to be a very interesting “State of the Industry” presentation, and we’ve already been working on that. And really looking forward to that. Right before that, of course, we’ll be announcing the Impact Award winners as well as the Robert Carey leadership award.

We’re expecting well over 18,000 attendees. The show is sold out. We’ve got one of the longest waiting lists we’ve had in a long, long time, if not ever. And well over 1,000 companies on the exhibit hall.

SN: Is there anything else that you’re really excited about, or that you want to make sure that people know about?

BS: Well, I think it’ll be the first time that the industry is all together since we’ve had both the Eat Brighter initiative with the Sesame characters as well as the FNV partnership that rolled out earlier this year.

And I think to me that’s a really exciting opportunity because we’ve had so many questions about one or other or both of those from the industry, as to what it represents for PMA and more importantly what it represents in the way of opportunities for them. And so I think I’m really looking forward to getting face-to-face feedback from the companies who have really dived in and used the assets for the Eat Brighter.

I think you’ll be seeing some more about what PMA has up its sleeve as far as demand creation activities. Those are certainly kind of the leading edge of what we are working on, but there’s some other things coming down the pike and it’ll be exciting to talk about those as well.

SN: Does the show have a theme this year?

BS: The show doesn’t have a theme, but overall, we’re really focused on growing, growth opportunities. That’s what it’s really all about.

SN: What should retailers look for at Fresh Summit?

BS: You asked me about a theme, and maybe I should clarify. We do have a marketing tagline, which is “Where Bright Ideas Grow,” and you’ve probably seen that.

And I think that speaks to what retailers should be on the lookout for. Because I know that a lot of people come and for them, obviously, the highlights are “What am I going to see on the show floor?” and “Who am I going to meet?” whether on the show floor or in business meetings or in social engagements and so forth.

But I think it’s a three-legged stool at Fresh Summit. I’m a firm believer in that. You’ve got the show with all the new products, the social events and business meetings where you do other networking, so that’s the second leg. And the third leg to me is the exchange of ideas. And sometimes I know the pressure of meetings and being on the show floor and so forth kind of tends to take people’s mind off that.

But I will tell you that the feedback that I get from people year after year after year is, “Boy I got a great idea from this workshop” or “I was talking to these people.” In other words, Fresh Summit is not just about seeing products and not just about making business contacts. It’s also about the “aha moment” when somebody tells you about an idea they had, a concept they introduced, something like that. The exchange of ideas is just as important, if not more important, than the exchange of products. And that to me is always one of the key things.

I do think that the other thing retailers should be on the lookout for is how the whole omnichannel fulfillment of produce is I think starting to change the way in which products are presented.

But not just the online but the different formats of stores and the options that consumers now have I think is really changing the way in which the industry, on the supply side, is packaging items, is thinking about marketing, is figuring out the best way to tell a story.

SN: Is there anything else about Fresh Summit or upcoming at PMA that you wanted to mention?

BS: I guess the only thing that might be of interest to your readership is that we have a retailer coming in as chairman. And that’s Russell Mounce, who heads up produce and floral for Sam’s Club. And just coincidentally, he’ll be the youngest chairman we have ever had, at age 40. So that’s kind of the new generation of retailers, and I think that’s newsworthy.

SN: What are the biggest issues facing the produce industry this year?

BS: I would say there are probably four items that are top of mind for me, and they would be driving demand, ensuring food safety, and then the two others are water and farm labor.

If you look out across the industry, the farm labor and water are probably the two that have got the most play this year. But food safety is a constant issue that has to be uppermost in mind, and driving demand as well.

SN: On the food safety side, are you thinking specifically about some of the upcoming FSMA rules or continuing progress in food safety in general?

BS: Yes and yes. I think what [the final FSMA rules released in September] will do is focus the industry’s attention in a way that we really haven’t had before. So clearly in terms of their implementation, they’re going to be here. And so the things we’ve been trying to get the industry ready for will be right in front of them. So no question that FSMA will concentrate the mind for an awful lot of people.

But I think more broadly than just the regulatory landscape is the kind of lessons that we’ve learned from the Center for Produce Safety’s research, the things that we have learned at PMA in terms of helping members when they have problems, when we’ve had the recalls, those kinds of things, is just constantly improving the way in which the industry addresses the culture of food safety. And that to me is still the No. 1  challenge, is creating a culture of food safety across an entire company and therefore by extension across the industry.

SN: What issues will the produce industry be watching for the 2016 election?

I would love to have somebody in the White House who has the passion of Michelle Obama for getting people to eat healthfully and uses his or her pulpit in the White House to encourage folks. Because quite honestly I think the First Lady has been an absolute dream for the produce industry over the last seven years. She has done stuff that has enabled us to get attention that we never otherwise would have gotten. And so I think that set a pretty high benchmark.

I think very definitely farm labor is something that a successful candidate is going to have to address. And I think the proper allocation of funds, government funds, towards food safety regulation is important for a candidate to understand and work with Congress on.

I mean, I would direct this more to Congress than I would at a candidate for the presidency, but I think it’s abysmal. It’s really abysmal to see how little funding the most important agencies get for ensuring the safety of the food supply. They need to get proper funding. And that’s why we’re part of the whole coalition to ensure that FDA gets adequate funding.

We’d like to have somebody in the Oval Office who is willing to speak up and ensure that the kinds of funding that the USDA puts into the various food groups kind of matches the priorities that we as a nation ought to have as far as the dietary guidelines go. So I would certainly look for somebody in the White House who is willing to select a smart person to head up the USDA and to work with Congress on the right kind of funding to match the dietary guidelines.

Turning to tech to combat food waste in the produce aisle
Jan 28, 2022