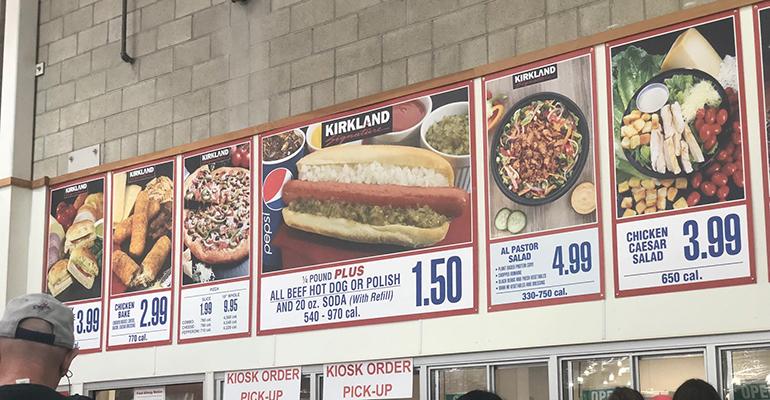 Is Costco’s food court menu jumping on the good-for-you bandwagon?

The notoriously media-shy company has been quietly phasing out a signature favorite on its famed food court menu: the Polish dog. The Issaquah, Wash.-based retailer has been experimenting with healthier menu options, including an acai fruit bowl and a salad topped with a soy protein mimicking the flavor of barbecue pork.

When asked about the ditching of the Polish dog, Costco gave few details to Nation’s Restaurants News. “Costco Management is only confirming that Costco did eliminate the Polish dog,” a company representative said in an email. Costco, whose food court hot dogs and pizza are just as famous as its treasure-hunt warehouse specials, revealed more about the menu changes in a Facebook post after several customers complained about the missing 1/4-pound spicy frankfurter. One customer said he drives 200 miles to shop at Costco, a trip that includes eating a Polish hot dog.

“We’re sorry to hear that you’re missing the Polish dog,” the company told one guest.

“We try and keep our Food Court exciting by adding new items. Of course, we can't keep everything on the menu so we do have to make some adjustments. We appreciate you posting. We’ll definitely record your interest in the return of the Polish dog to our Food Court.”

On Monday, a Costco in Southern California was still selling a Polish dog with a 20-ounce soda for $1.50. A food court employee said the Polish dog would be around for about another week before being taken off the menu. She confirmed that an acai bowl topped with blueberries and dried, crunchy baobab fruits is new on the menu.

The Costco menu board promotes the $4.99 bowl as “antioxidant rich.” Another new item causing buzz in recent months is an entree dubbed the “Al Pastor Salad.”

The salad triggered a debate on one social media site as some argued that the title was deceptive. For Southern California fans, anything labeled “Al Pastor” typically refers to tacos made with richly marinated pork or chicken. But this dish is topped with chunky soy pieces. If you don’t read the fine print, consumers said, it looks like real meat.

Costco describes the protein as a “plant based protein (soy)” in the menu description.  The main menu board and kiosk menus do not refer to the $4.99 salad as a vegetarian variation.

Costco operates 750 warehouses internationally, with 520 in the U.S.