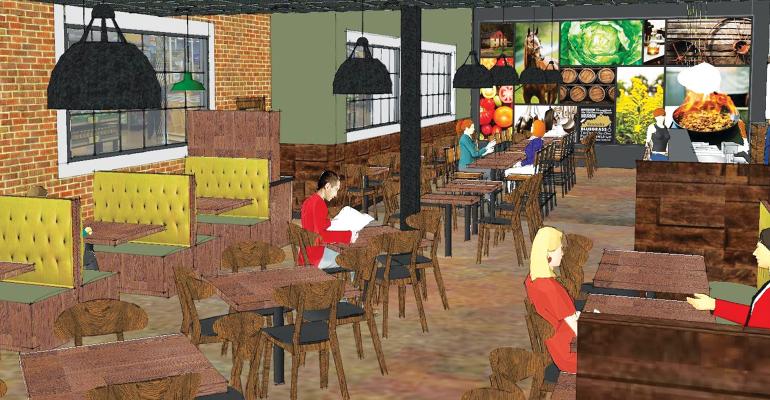 The convergence of food retailing and foodservice has long been a key element of some retailers’ strategies.

Whole Foods Market demonstrated in its rapid expansion during the last 20 years that prepared foods can play an important role in the operations of traditional food retailers, and other chains, including Wegmans and Hy-Vee, have also fully embraced foodservice as core components of their business.

Kroger, however, although offering prepared foods stations in many of its stores, has never until this year plunged head-first into the restaurant business. That changed in November when the company opened its first full-service restaurant, called Kitchen 1883 after the year the chain was founded.

The first Kitchen 1883 opened near a Kroger Marketplace store in Union, Ky., offering what the company described as a “fresh take on new American comfort food.” The restaurant features a made-from-scratch menu, craft cocktails and “a community-centered atmosphere,” according to Daniel Hammer, Kroger's vice president of culinary development and new business.

Kroger tapped Cincinnati chef Lisa Kagan to help run the new restaurant. A veteran of popular Cincinnati eatery Melt Eclectic Deli, Kagan and Hammer will be under a microscope as the industry watches to see if Kroger can pull off foodservice in the way that chains like Wegmans, Whole Foods and Hy-Vee have been able to.

Whether or not 1883 signals a rebirth of Kroger’s fortunes, however, remains to be seen. The move does, however, represent the company’s new strategic imperative to provide meal solutions in a range of forms, from scratch cooking to meal kits to heat-and-eat meals to full-blown, restaurant-style foodservice.

“We will change the way people eat in the U.S.,” said Rodney McMullen, Kroger’s chairman and CEO, during the company’s annual Analyst Day meeting. “If you are eating, we want to serve you. Unless you are eating in a white tablecloth restaurant, we want to be able to provide that meal for you.”

Making its debut just as Kroger is scaling back on its expansion of traditional grocery stores and considering the sale of its convenience store operations, Kitchen 1883 gives Kroger a potential expansion vehicle in a new segment. The investment in Kitchen 1883 also signals that Kroger may see the restaurant industry as having potential for driving the sales growth its shareholders demand.

The debut of Kitchen 1883 follows the commitment earlier in the year by Hy-Vee to become the largest franchisee of Wahlburgers, the causal-dining chain owned by the family of actor Mark Wahlberg. Hy-Vee also recently said it was converting some of its in-store full-service Market Grille locations to the self-serve Market Grille Express format, indicating that retailers are still adjusting the demands of their customers when it comes prepared foods.