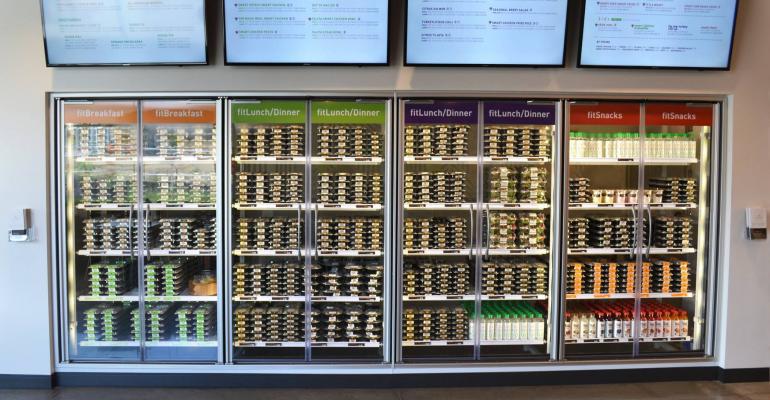 Customers can be in and out of Eat Fit Go, with lunch in hand, in just a few minutes. But unlike many grab-and-go stores, this chain only sells food for the health-conscious. The Omaha-based chain makes fresh, pre-portioned and packaged meals on a daily basis—all high in protein, low in sodium and mostly preservative-free — including breakfast, lunch, dinner, snacks and some children’s items.

“We cater to all types and ages, so our variety widely varies, but we strive to offer something on our menu for all dietary preferences," said COO Jen Cain. "About 90 percent of our menu is gluten-free, as well as all of our pasta. We are always listening to our consumers and offering new menu items that cater to their dietary restrictions or needs.”

The menu features seasonal items every few months, with a larger roll-out of multiple new items every three to four months — and will soon introduce monthly feature meals, according to Cain. "It’s essentially helping people eat healthfully in a convenient way," Lisa Eurek, owner of a Nebraska store, told the Kearney Hub. "Think of it as your grocery store now."

Average sales vary by location, but Cain said stores see between 100 and 200 transactions daily, and $40 tickets are common. "Some guests purchase one meal to dine in, and many others will purchase the Perfect Week, which is five breakfasts, five lunches, five dinners and five snacks," she said. For beverages, Eat Fit Go sells water, Bai water and Bai Bubbles — naturally sweetened, low-calorie drinks. The company also sells Rx Bars, which use egg whites as a protein source instead of powders.

Each store, which measures between 1,100 and 1,500 square feet, has several dining areas, a microwave station and meal fridges. Eat Fit Go first launched in Omaha in February 2016 and now has locations in Kansas, Missouri, Arizona, South Dakota, Iowa and elsewhere in Nebraska — as well as plans to expand into Colorado, Georgia, Minnesota and Oklahoma, with expectations for other locations down the road.

"We have no plans of slowing down and are on track to open close to 100 more stores in 2017," said Cain, adding that there are also plans to introduce an ecommerce platform for home delivery. "We are spearheading the effort to bring convenient, healthy options to all Americans."