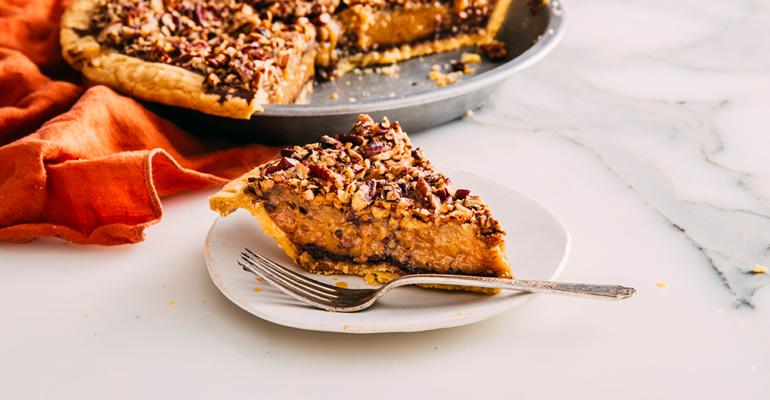 The top prepared foods offered at Whole Foods this holiday season included a pecan pie, a traditional turkey dinner and a vegan version, according to the chain, which said its most recent price cuts have focused on holiday items.

The Austin, Texas-based chain, now operating as a division of Amazon, said its top-selling items this holiday season were the 9-inch Bittersweet Chocolate Pecan Pie from Brooklyn, N.Y., bakery Four & Twenty Blackbirds; the Thanksgiving dinner for 12; and the vegan meal from the Philadelphia-based vegan chef at Vedge. All three items were available in all U.S. stores and online, a spokeswoman for Whole Foods told SN. The vegan meal from the Philadelphia-based vegan chef at Vedge.

Among the top-searched recipes at wfm.com were Dry Brined Citrus Turkey, Classic Butternut Squash Soup and Classic Gluten-Free Stuffing, the retailer said. Using Alexa, the voice-prompted system from Amazon, consumers most frequently asked for a recipe for hot chocolate, followed closely by asking for a recipe for chocolate chip cookies.

Whole Foods said its most recent wave of price cuts since being acquired by Amazon have focused on holidays foods. This year set a record for sales of both turkeys — which were offered at a discount for Amazon Prime members — and sweet potatoes, the company said.

In a report last week, analysts Karen Short and Ross Sandler of Barclays Capital said they had noticed sales on holiday-related consumable items in Whole Foods stores, particularly among beverage items such as egg nog and apple cider.

“Seasonal end caps had very prominent for sale signs — possibly an indication that they had outlived their usefulness,” they said in the report.

Other sale items included toys — priced at 20% off for a three-day window — and flowers/decorations, such as poinsettias, evergreen bouquets and scented cones.