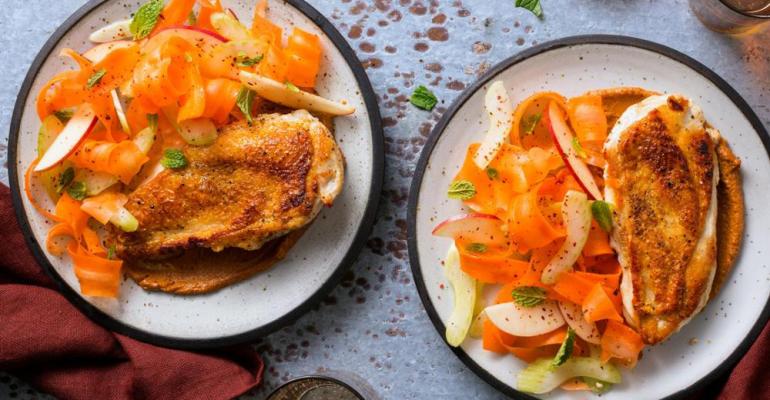 Recent developments show there’s still an appetite for meal kits among investors and retailers, even though the jury is still out on whether or not they have staying power with consumers.

Despite the weak stock performance of Blue Apron, investors bet $57.8 million this week on San Francisco-based Sun Basket, one of Blue Apron’s chief rivals in the subscription-based meal kit niche, according to a Bloomberg report. The investment, which includes backing from Unilever, values the meal kit provider at $500 million, the report said.

In addition, this month both Costco Wholesale Corp. and regional supermarket operator Bashas’ began rolling out in-store meal kits from Newport Beach, Calif.-based True Food Innovations (TFI). The True Chef Meal Kits, which feature preservative-free formulations based on patent-pending technology from TFI, will debut in Bashas’ stores in Arizona and in Costco stores in Texas, with plans for a national rollout in Costco beginning in February and continuing throughout 2018.

Partnering with a retailer to offer meal kits in stores — as several meal kit companies have done, including Plated, which was acquired last year by Albertsons — appears to be a more viable option for meal kit companies, said Chuck Cerankosky, an analyst with Northcoast Research, Cleveland.

“[Working with a retailer] makes the most sense to me, because you have so much investment tied up in packaging, refrigeration and delivery, it adds quite a bit to the cost in the subscription model,” he said. “Also, the subscription model forces it to the customer, and our research has indicated people don’t find it all that convenient. It has to be something consumers can can do on a whim, rather than on a scheduled basis.”

Kroger Co., which has developed its own line of meal kits called Prep + Pared and has been rolling them out to more and more markets as an adjunct to its prepared foods offering, appears to be finding success with the retail-based sales model, Cerankosky noted.

Costco, however, is known for bringing items in and out to maintain its “treasure hunt” atmosphere and keep its SKU count to a minimum.

“Costco likes grabbing onto a trend that its customers like, and if its sustainable, Costco will continue to sell it,” said Cerankosky. “When it’s no longer popular, it will disappear from the Costco shelf.”

The next challenge for TFI, he said, will be keeping up with demand if the meal kits become popular.

“When something catches on at Costco, you might have to build a new factory,” he said.

Meanwhile Sun Basket, which offers a range of meal kits tailored to vegan, vegetarian, gluten-free, paleo and other diets, has rejected acquisition offers, according to the Bloomberg report. The report noted that the company is not profitable, although revenue almost quadrupled in 2017, to an annual run rate of about $275 million.

The company, which is a certified organic retailer and touts its use of organic produce and sustainable ingredients, said its focus on niche diets helps it retain customers, according to Bloomberg.

While Blue Apron’s difficulties in driving sales growth have demonstrated the challenges of the the subscription model for meal kits, a new study from the National Association of Convenience Stores (NACS), found that in-store meal kits can also face challenges, at least in the c-store channel.

NACS studied the results of two pilot programs offering meal kits in convenience stores, one with c-store operator Square One Markets in Bethlehem, Pa., and another with the Shaw’s 88 Kitchen store at Utah State University.

The pilots found that consumers were not always willing to put their money where their mouth was when it came to buying meal kits in stores. Although 77% of consumers surveyed in 2015 said they would be interested in purchasing a meal kit from a store, and 85% of weekly c-store customers said they would purchase a dinner meal kit, sales from both pilots did not reflect that interest, the research found.

“While consumer surveys and trends may point to opportunities, it’s also important to examine execution, especially in small-format stores where every square foot of floor space is critical,” said Jeff Lenard, NACS vice president of strategic industry initiatives. “Dinner meal kits may be a concept that is still ahead of its time for smaller convenience stores. However, it still may be appropriate for larger convenience store chains that have their own distribution centers, bakeries and commissaries, or those that operate highly evolved and dedicated foodservice programs.”

The first test featured dietitian-approved meal kits designed by chef Ava Goldfarb, CEO of Six O’Clock Scramble, that were meant to feed a family of four for less than $20 per kit. Despite heavy promotion and local media coverage, the store only sold five to 10 kits per week.

Among the learnings from the test, according to NACS:

• Offering portions only for a family of four may have limited the appeal of the meal kits;
• Although c-stores generate strong traffic to their fuel stations in the afternoon hours as consumers drive home from work, they are not thought of as dinner destinations, and the Square One Market in particular did not have a strong reputation for foodservice; and
• The marketing focused on the healthy aspects of the meal kits, rather than their convenience, which may have been another disconnect for consumers. Consumers might also have been expecting larger portions, the NACS research concluded.

In addition, the store encountered sourcing and execution challenges as it sought to assemble the meal-kits in-store.

In the Utah State University test, the “Chef in a Box” by Aggie Eats meal kits were discontinued after five weeks because of food safety concerns around the packaging. In addition, although the kits received some favorable feedback from customers, the school felt it could not produce and sell the 75 kits per week it needed to in order to break even.

“The cost of the packaging and other materials ultimately made the kits too expensive to produce at the $4 [per person] price point,” the NACS report concluded.