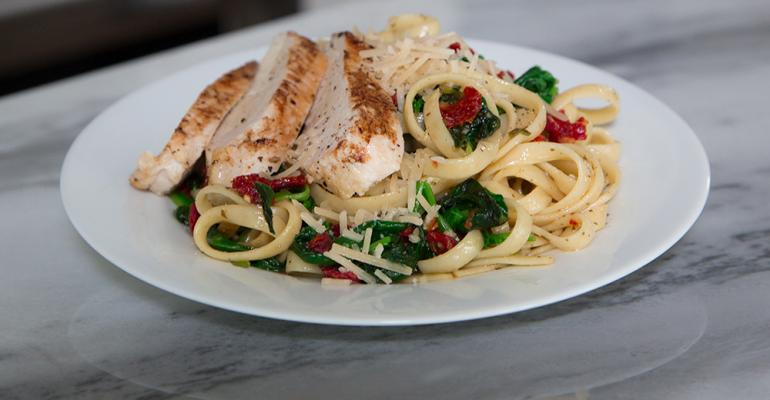 Walmart said it is expanding a new assortment of meal kits and heat-and-eat prepared foods to more than 2,000 stores this year.

In addition to four varieties of pre-portioned meal kits that include the ingredients necessary to make a dinner for two, the expanded meal program also includes ingredient packages to turn its pre-cooked rotisserie chickens into full meals and 10 varieties of heat-and-eat meals, no assembly required.

The meal offerings, which are assembled daily in each store and merchandised in the deli area, are currently available in about 250 Walmart locations. They were developed and tested in Walmart’s Culinary and Innovation Center.

Bentonville, Ark.-based Walmart previously had only offered meal kits online. Those kits, which continue to be offered through Walmart.com, are supplied by third-party vendors.

The new meal kits and heat-and-eat meals mark a significant step forward in the prepared-meals business for Walmart, which previously had not merchandised a significant prepared-foods offering in its delis.

Amazon-owned Whole Foods stores lack the space that Walmart has to merchandise meal kits, he said, and Amazon does not have the buying power in consumable foods to compete with Walmart on price with a meal-kit program.

“It’s a very smart move on Walmart’s part, and follows the success that Bob Miller [and his team] at Albertsons have had with Plated,” Flickinger said.

Similarly, other retailers, including Kroger Co., Cincinnati, and Publix Super Markets, Lakeland, Fla., have developed their own meal kit lines that they offer in stores. Like the Walmart meal offerings, both Kroger and Publix merchandise meal kits that require varying degrees of preparation, from minimal to more complex ingredient assembly.

Walmart’s move follows a series of steps the retailer has taken to improve its perishables offerings, which analysts said have been successful in driving traffic and sales. The moves include last year’s upgrade to certified Angus beef and other investments to enhance in-store quality of produce.

“The customers have really responded to areas we've spent a lot of focus on, particularly fresh categories, and that business has really sequentially improved,” Kary Brunner, director of investor relations at Walmart, told analysts in a conference call last November.

The move also comes as Millennials emerge as significant consumers of prepared foods. A report last week from Alliance Bernstein noted that these young consumers spend 7.5% of their income on prepared foods, compared with 6.6% to 6.9% for older generations, and also conduct more of their shopping trips at supercenters (20% of trips) than Baby Boomers (18%).

“Customers are busier than ever and we know getting a delicious dinner on the table can be a chore. We’re here to help,” said Tyler Lehr, senior VP and general merchandise manager, deli services, Walmart U.S., in a statement. “These delicious meals give the best or worst of cooks a fresh, easy option for dinner tonight, or later this week.”

Walmart said the meals range in price from $8-$15. According to a Bloomberg report, the meal kits will be priced at $15 and the heat-and-eat meals at $8-$10.