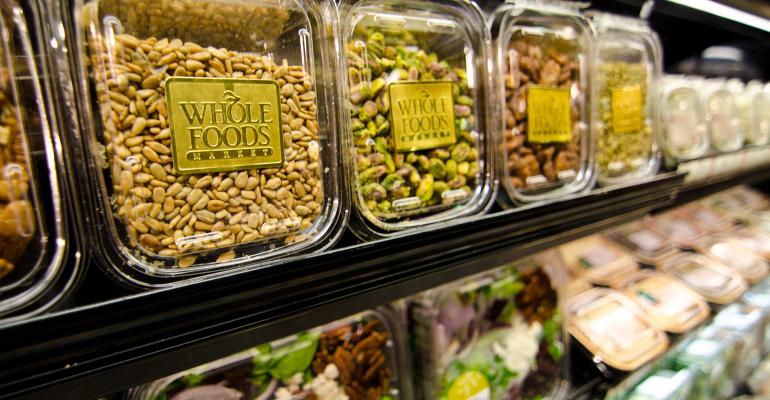 The chain will close facilities in Everett, Mass.; Landover, Md.; and Roswell, Ga., and will outsource or move in-store the prepared-foods operations that had been conducted at those sites, according to local reports. Prepared foods have long been a signature element of the chain’s offering, accounting for 19% of company sales (including bakery) in each of the last three years.

“They are attempting to streamline operations any way they can,” said Jay Jacobowitz, founder and president of Brattleboro, Vt.-based consulting firm Retail Insights.

He suggested that much of the operations at the three facilities — which together employed about 500 people, the local reports said — would probably be shifted to third parties rather than taken in-store. This would likely provide Whole Foods with a higher degree of product consistency, Jacobowitz explained.

A report in the Boston Globe noted that Whole Foods had already ceased production at its Whole Foods North Atlantic Kitchens facility in Everett and had outsourced the production of prepared foods to suppliers using Whole Foods’ recipes. A Facebook page for the facility said it had supplied more than 65 Whole Foods stores in Massachusetts, Maine, Connecticut, Rhode Island, New York and New Jersey.

A Whole Foods spokesperson could not be reached for comment.

The Massachusetts facility had received a warning letter from the FDA last June about food safety issues at the site, including condensation dripping from overhead structures onto areas where uncovered foods were exposed, improper handling techniques and other problems. A Whole Foods spokeswoman told the Boston Business Journal that the closure was an “internal business decision” and not driven by any government actions.

According to a report in the Austin American Statesman in Texas, the three facilities were the last remaining Whole Foods prepared-foods commissaries in the U.S.

One industry observer, who asked not to be identified, told SN that it was likely much easier for Whole Foods to outsource food production to third-parties today compared to when the facilities were first built.

“There are a lot of companies out there working with cleaner ingredients, and any companies doing prepared foods these days are focusing on higher quality, so my guess is there are a lot more options for them to outsource,” the observer said. “Twenty years ago you probably couldn’t find anyone who could do organic ‘whatever’ for you, and now you probably can.”

In 2015, Cincinnati-based Kroger Co. began outsourcing some prepared foods such as salads and sandwiches to foodservice supplier Sysco.

Whole Foods’ moves come as the company is undertaking a broad strategy to bolster sales and profitability amid increasing competition from both traditional supermarket operators and natural and organic specialists.

In its fourth-quarter earnings conference call in November, Whole Foods CEO John Mackey said the company was more than halfway toward its goal of reducing expenses by $300 million annually by the end of fiscal 2017. The company is achieving reductions through in-store labor-saving measures — such as combining meat and seafood departments in some stores — and centralizing marketing and human resources functions by market rather than at the store level.